On an episode of Music Core, Girls’ Day performed their hit song “Darling.” All was going well until the girls were suddenly being poured on. The members were continuing with smiles and energy even though they could barely open their eyes.

Hyeri shared a funny story about the incident on Hello Counselor revealing that it was raining so hard that it removed her makeup. She had just finished her time on the show Real Men where she had gotten tanner. The host of Hello Counselor said it was like her skin color completely changed.

This viral moment of GFriend is hard to watch. GFriend attended a concert hosted by SBS in September 2015. Unfortunately, the stage on which the group was performing had been rained on. Several members slid, slipped, tripped, and fell on stage during their performance.

One member who suffered the most was Yuju as she fell a total of 8 times. Of course, many fans were livid to see the members of GFriend performing in such horrible conditions.

Once again, fans discover that rain and dancing are a horrible combination. SISTAR came out on stage ready to perform but little did they know, the stage was a slippery mess. Wearing very high heels, SISTAR struggled to keep their balance.

Instead of causing a scene or giving a bad attitude, SISTAR smiled and even laughed at their stumbles. At the end of the performance, Hyolyn giggles and says sorry to the audience. Exiting off the hazardous stage, the members hold each other’s hands and receive help from the staff.

Fans were concerned and upset with seeing Red Velvet perform in such horrible weather. The weather was between 32°F and 25°F the night of the 2016 MBC Gayo Daejun. It seems outrageous to let anyone go out to sing and dance in that kind of weather, yet Red Velvet did!

The even more heartbreaking part is that the five members were in short skirts. It was so cold that you could see their breath.

BTS was also apart of the 2016 Gayo Daejun. Luckily unlike Red Velvet, BTS was dressed in suits and layers, yet it doesn’t make dancing in 32-25°F weather fun.

Though BTS looked amazing and unaffected during their performance, during their rehearsal they were dressed in puffy warm padded winter jackets.

At the Cultwo Show 10-year anniversary, TWICE performed in a heavy downpour of rain. The rain didn’t stop TWICE from giving their fans a great performance full of bright expressions.

Fans were extremely impressed and thankful for TWICE’s professionalism. The girls didn’t skip a beat! 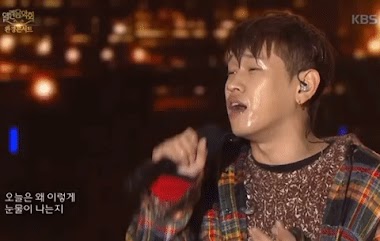 On November 6th, KBS’s Open Concert, soloist Crush would not end his performance because of bad weather conditions. Many fans were impressed with his professionalism and praised his desire to go on despite getting completely drenched.

Not only can rain can disrupt a performance, but wind can too! Hitting the stage with their viral hit “Up & Down,” EXID was hit with strong wind. Throughout the performance, the windy weather blows the girl’s hair in every direction. You can see the members struggling to keep their hair out of their faces and not get tangled with their microphones.

SEVENTEEN performed their song “Pretty U” in some heavy rain. The choreography usually involves a couch yet, they did not have one for this performance. Already having to deal with the rain, the group improvised by dancing without a couch.

The stage was covered in puddles of water and staff had to push huge amounts of water off the stage. The hosts Yoon Shi Yoon, Cha Eun Woo, and Seol In Ah were seen struggling to walk on and off stage. Seol In Ah was also wearing heels and a long dress.

Even the backup dancers suffered greatly as footage showed them hiding behind the uncovered backstage. There was no cover or umbrellas to keep them out of the rain.