2PM’s Junho will be transforming into a chef specializing in Chinese cuisine.

SBS’s upcoming Monday-Tuesday drama “Wok of Love” has shared its first stills of Junho in his first romantic comedy role. He will be playing the character Seo Poong, a chef who specializes in Chinese cuisine and is passionate about his work. Though he begins by working at a prestigious hotel, he ends up falling from grace and landing himself in a neighborhood joint on the brink of closing down. With the nickname “The Wok Incarnate,” Seo Poong has a strong conviction and a fiery passion about the food he makes.

The new stills show Junho wearing a pristine, white chef’s uniform with confidence emanating from him. He has a relaxed smile on his face as he attends to his customers and gives off the aura of a man who enjoys his job and is proud of his creations. 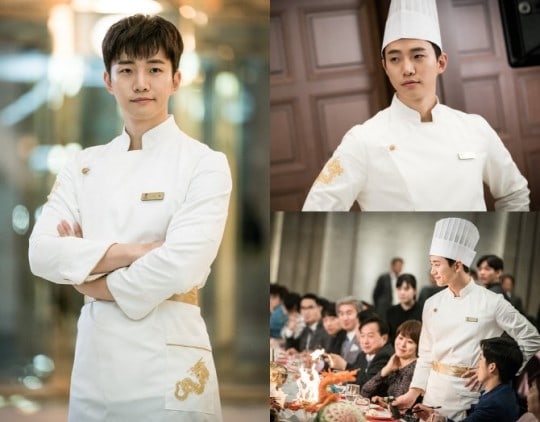 Junho has impressed as an actor through productions like “Chief Kim” and “Just Between Lovers,” which is why many are excited to see his new transformation in “Wok of Love.” The production staff stated that he is putting his all into his character, doing a deep analysis of who he will play and even working on his cooking skills.

SBS’s “Wok of Love” will tell the love stories of three people that are hotter than the oil that boils and bubbles in a wok. The drama will delight both the viewers’ eyes and their taste buds and will premiere on May 7 at 10 p.m. KST. The drama will be available on Viki!