2PM’s Wooyoung talked on “Radio Star” about how he’s changed as an artist.

Wooyoung was a guest alongside 2AM’s Jo Kwon, GOT7’s Jackson, and INFINITE’s Sunggyu on the January 24 episode of “Radio Star.”

Wooyoung said in the episode that for five years, he had “artist disease,” which describes the mentality of someone who aims to show that they’re an artist that only focuses on their craft rather than things like variety shows.

He explained, “It was really severe. I made a lot of effort to mature. I came to tone it down after realizing I was immature and was behaving badly back then. I took time to recuperate. It lasted about five years.”

The hosts asked about how he had been quiet during his appearance on “Radio Star” four years ago, and Wooyoung admitted that he’d had “artist disease” then. He added, “I think I can start a new lifestyle through this broadcast today.” 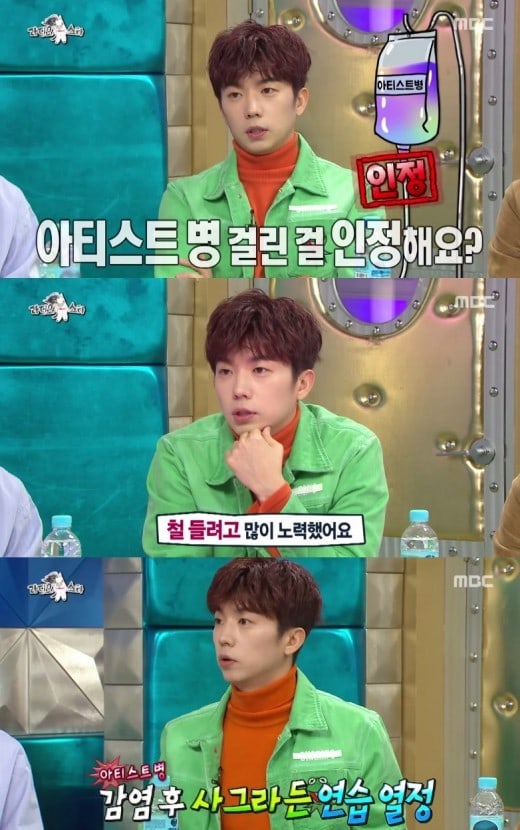 INFINITE’s Sunggyu commented, “I think Wooyoung has totally recovered from it.” He explained that Wooyoung and former INFINITE member Hoya had used to dance together, and Hoya had shared a story with Sunggyu.

He explained, “Wooyoung had said to him, ‘We need to show ourselves as singers on stage, instead of just dancing really hard. Singing is more important than our performance.’ But looking at Wooyoung’s music video today, he danced alone for the entire three minutes!”

Wooyoung laughed and replied, “What’s true about what Sunggyu said is that before I got ‘artist disease,’ I was really devoted to practicing. However, I started to let everything go after getting ‘artist disease.’”

Former labelmate Jo Kwon also shared, “Wooyoung was always in the practice rooms. It was to the point where Park Jin Young told him to go out and have fun. I realized Wooyoung really didn’t know how to have fun when we went to a club for the first time after we turned 20 years old. But he changed a lot in the middle of our 20s. He was a late bloomer, but now he’s someone who really knows how to have fun,” causing the rest of the cast to laugh.

Watch the latest episode of “Radio Star” below!