This week on “Touch Your Heart“: After a little bonding time, Jung Rok (Lee Dong Wook) decides to give Yoon Seo (Yoo In Na) a chance to be a proper secretary. However, for an actress to take on such a complex work scope in such a short amount of time proves to be a daunting matter. Nevertheless, Yoon Seo is determined to really give it her all, and through it, Jung Rok and Yoon Seo learn important lessons from each other.

Here are some of the things we loved and hated about this week’s episodes:

Warning: Spoilers for Episodes 3 and 4 below.

1. Loved: The relationship between Yoon Seo and her manager

Yoon Seo and her manager oppa, Hyuk Joon (Oh Eui Sik), honestly share such a wonderful connection. It’s clear that they genuinely care for each other, and having worked together for so long, know each other well too. But what is truly noteworthy is that in this relationship, we see a very real, very down-to-earth side to Yoon Seo instead of her more flamboyant, diva-ish side. 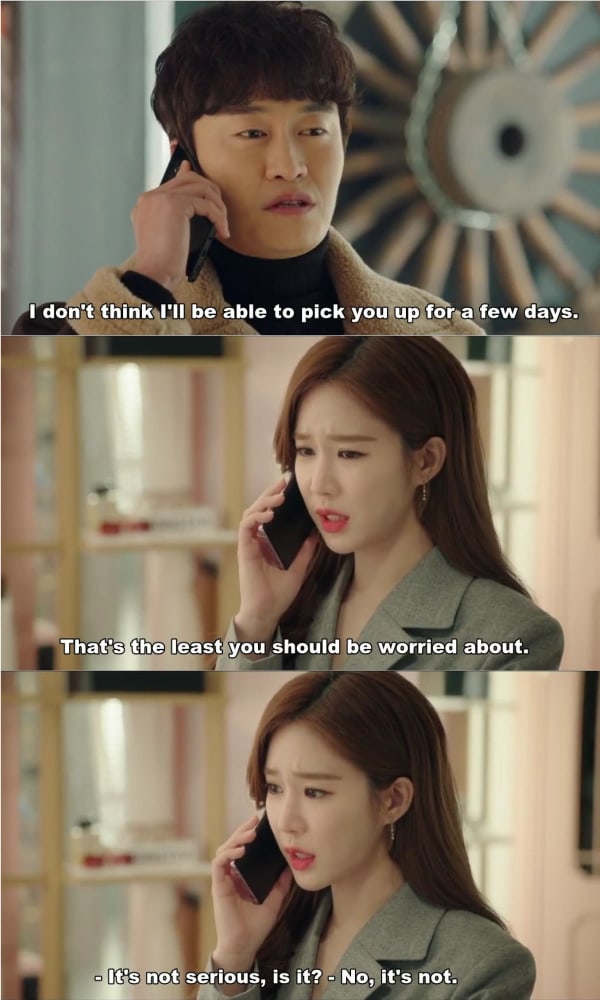 When Hyuk Joon is temporarily assigned to (nemesis) Kim Minji, he lies to Yoon Seo – to avoid hurting her – by telling her that he got hurt. Instead of being worried about how she is to travel around for the next few days, she’s immediately more worried about Hyuk Joon.

Later, when the truth is revealed, Yoon Seo only jokingly warns him to not lie to her again. Yoon Seo handles it all more maturely than you’d expect from her, and this all highlights how much she treasures Hyuk Joon.

Last week, I highlighted Yoo In Na’s comedic skills, and they’re still as present as ever this week. Again, major props should be given to her natural charm and talent for making what could very possibly be a grating character into someone likable.

This week, however, one of Yoo In Na’s more memorable scenes is dramatic instead of comedic. After Yoon Seo discovers Hyuk Joon together with Minji and overhears her badmouthing her, the two women get into a fight. The shot later cuts to a disheveled Yoon Seo with the most pained expression on her face. It’s a look of quiet sadness mixed with helplessness, and with Yoon Seo trying to stay in control and not break down, it makes it all the more heartbreaking to watch than if she did actually break down. It’s a raw scene to witness and a testament to Yoo In Na’s acting range.

3. Hated: Not enough room for Lee Dong Wook to stretch

Sadly, the amount of fun material Yoo In Na has to work with is contrasted with how little Lee Dong Wook has had. For the past four episodes, Jung Rok has mostly been in “lawyer” mode, which is just him spouting off long lines of jargon. The character itself is just slightly one-note at the moment, which doesn’t give Lee Dong Wook much to do. Which is sad, because we know how superbly he can pull off both the comedic and the dramatic, and frankly, I want to see more!

I loved the silly, self-aware (and oft times self-deprecating) moments from the get-go, and I’m happy those are still going strong. When Yoon Seo suggests drawing a mole on her cheek as a disguise à la “Temptation of Wife,” Jung Rok astutely points out that’s hardly a disguise!

The mole is the Korean equivalent of Clark Kent’s glasses.

Or when Moon Hee (Park Kyung Hye) wallows in despair at having been rejected and claims that she’ll never love again, in walks a handsome delivery man (2PM’s Chansung), and she’s immediately smitten and runs off after him. Yes, it’s cliché, but it’s all funnily executed enough for it to work.

Ladies and gentleman, the power of Chansung’s visuals.

For a relatable moment on the silly end of the spectrum, I give you this:

Jung Rok’s opposition lawyer is a huge, huge fan of Yoon Seo, so much so that he nearly recognizes her just from her finger. I was guffawing at this scene, especially when thinking about all the silly quizzes we have on Soompi, where Soompiers are to identify their favorite idols from a smile, an ear, or some other random body part. It all rings very true, which makes it all the more hilarious.

The other relatable moment that’s noteworthy comes when Yoon Seo says to Yoon Ha, “It’s tiring isn’t it?” Those are such powerful words to hear, especially for someone like Yoon Ha who has been struggling and tumbling along for so long. Sometimes, all we want is for someone else to acknowledge what we’re going through. Yoon Seo too sees part of herself in Yoon Ha. They both share the same insecure feelings of loneliness and wanting to be loved, which easily speaks to every one of us. It is a beautiful moment, wonderfully written and executed.

Are you enjoying “Touch Your Heart” so far? And were you surprised by Chansung’s cameo? Share your thoughts with us below!

Catch the latest episodes of “Touch Your Heart”:

Belinda_C is really enjoying this drama! It’s been a while since she’s watched a fun rom-com! She’s also really proud of SEVENTEEN’s achievements this comeback. Come celebrate their wins with her on Twitter!