4 Times “Familiar Wife” Gave Us All The Feels

tvN’s “Familiar Wife” is drawing in viewers with its captivating storyline and expressive acting.

Last week, Woo Jin (played by Han Ji Min) finally confessed her feelings for Joo Hyuk (played by Ji Sung). After her candid confession, many viewers are wondering what will happen to the storyline as it progresses.

The August 30 episode helped the drama achieve its highest viewership ratings yet with an average of 8.2 percent and a peak of 9.9 percent. It was also the No. 1 watched TV program in its timeslot.

Let’s revisit some of the moments when “Familiar Wife” touched our hearts.

Joo Hyuk and Woo Jin still met one another despite being different in the changed present-day. Woo Jin felt favorable and familiar feelings towards him the moment she saw a photo of him on a random cell phone that she found. Joo Hyuk, however, was surprised at reuniting with Woo Jin in their “reset” lives.

He tried to thwart her advances by badmouthing her and acting immature. Despite these attempts, Woo Jin stated, “I’m still lacking, but I’ll try my best to pursue you, so please look forward to it.” She also said, “Manager, your first impression was really good. You were friendly and somehow felt like someone I knew.”

Despite the changed present, Woo Jin was honest and confident in front of Joo Hyuk like the first time when they met.

Joo Hyuk came to the training institute where Woo Jin and Jong Hoo (played by Jang Seung Jo) were. He subconsciously pat her head and confused Woo Jin even more when she felt like his touch was familiar.

Even though the memories were gone, the feelings were still there. The warmth yet strange feelings of déjà vu startled Woo Jin and made her even more aware of her feelings. Despite her attempts to stop her feelings from growing deeper, their fate became even more intertwined. 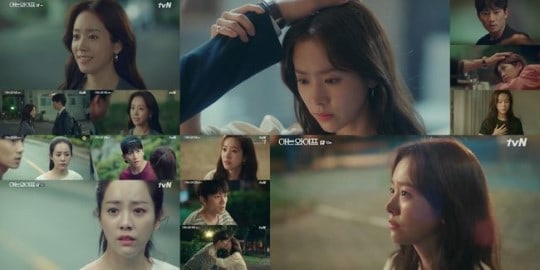 Woo Jin began to figure out that she had feelings towards Joo Hyuk, who knew about her fever reducer which was something that no one knew about. However, she tried to stop her feelings from growing in face of reality. This was put to the test when she heard that someone fainted at the company marathon and ran to the event thinking of Joo Hyuk.

After checking that the man on the ambulance was not Joo Hyuk, she became relieved. Once the initial shock wore off, she realized that her feelings for him were love, and she cried showing the weight of her emotions that had built up inside of her.

A confession and a kiss

Once she came to the realization, Woo Jin’s feelings could no longer be contained. After she got drunk, Woo Jin confessed to Joo Hyuk, “I know it’s wrong, and I know I’m not supposed to, but it didn’t work out to my heart’s desire from the beginning. My eyes keep looking at you, and I feel comfortable with you and could lean on you as if you weren’t a stranger.”

Because he knew it was his fault for changing the past and the reality they faced, Joo Hyuk had to turn away. However, Woo Jin stepped towards him and kissed him. Han Ji Min’s detailed, emotional acting drew sympathy from viewers and made them curious about how Joo Hyuk will react from here on out in light of his divorce with Hye Won (played by Kang Han Na) and Woo Jin’s confession.

A source from the drama said, “Woo Jin, who was honest about her feelings at every moment, is expressing the change of emotions in a Woo Jin-like way. Her awakened feelings for Joo Hyuk and her independent actions towards their fate will bring about another butterfly effect.” 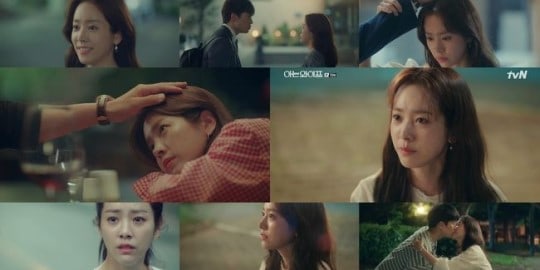 “Familiar Wife” airs on Wednesdays and Thursdays at 9:30 pm. KST. Watch the latest episode below!