It’s a great time to be an Lee Seung Gi fan, Soompiers. Tap into your dose of cute, sweet, and romantic fun with director/writer Park Jin Pyo’s 2015 rom-com “Love Forecast,” which stars Lee Seung Gi and his “Shining Inheritance” co-star Moon Chae Won. Puppy dog Lee Seung Gi doesn’t disappoint as a devoted young man in love and makes us more than anxious for his October return from the military. Luckily, you can watch this film multiple times on Viki if you’re missing him. I know I will. Let’s check out five reasons why this movie needs to be on your watch list. 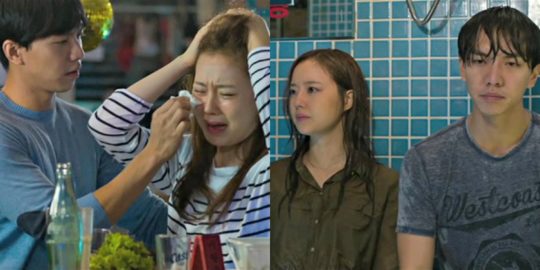 If you’re like me, you’ve seen more than your fair share of rom-coms. You know, those movies with a pretty girl and a handsome guy who fall in love over a set of wacky circumstances. They travel through highs and lows together, and you with them. “Love Forecast” fits into that category and snuggles right in with the best of its comrades.

It is the story of an elementary school teacher, Kang Joon Soo (Lee Seung Gi), who is as clean cut as his profession. Women dump him mercilessly despite his unwavering devotion to them and his uncommon thoughtfulness toward them and their needs. His best friend, weather goddess Kim Hyun Woo (played by Moon Chae Won), is also a recipient of his kindness. Although a popular, sexy weather reporter at work, she lets herself go when with Joon Soo, her friend of 18 years. With him, she is a foul-mouthed, junk-food eating slob who relies on Joon Soo to take care of her. Her eyes are set on a married colleague, Dong Jin (Lee Seo Jin), which leaves Joon Soo to comfort her in her times of woe as the other woman. She regards Joon Soo in no other light but platonic. The question is, how will he win his impulsive friend over?

Moon Chae Won and Lee Seung Gi had great chemistry back in 2009’s “Shining Inheritance,” even though they weren’t the main couple. That chemistry is reignited in “Love Forecast.” It is the heart of the intrigue that centers around friends who turn into lovers. The two are charming as Hyun Woo and Joon Soo, who, for most of the movie, fight, drink, play, cry, whine, curse, and complain together — things you can only do with the closest of friends. An air of complete ease and comfort lingers around them, making them easy to watch and even easier to root for.

An appropriate ongoing metaphor, Hyun Woo’s weather reports are the indicators of emotions and situations to come upon our hero and heroine. When the going gets tough, hail pelts the kind-hearted but downtrodden Joon Soo. When the friends commiserate over broken hearts, it pours outside while they drown their sorrows in drinks (she soju, he soda.) Weather has always been an indicator of emotion in film and television and to use it much more purposefully in “Love Forecast” is quite clever indeed.

Perfect characters are fine for a time, but they become incredibly dull if on air for more than a few minutes. Such is not true of Hyun Woo, Joon Soo, their friends, and their family. Hyun Woo is a woman guided (and misguided) by the beatings of her heart. It is why she doesn’t go for Joon Soo during their years of friendship — he doesn’t make her heart pound. Instead, she follows it and goes after a married man. When that ends, she dates a younger man who she finds intriguing. Sadness begets drinking and fits of cursing. Happiness begets skipping in the sunshine. While she is rather imperfect, she is charming in her whimsical flaws. Her character’s goal is to learn to be less selfish.

Joon Soo is an all around good guy. He treats women right. He doesn’t treat them like pieces of meat. He is respectful. But, he is also naive and that allows him to be used by his girlfriends and, ultimately, by Hyun Woo. While she does understand him best and knows how to comfort him, his unrequited feelings for her make him a total pushover. His end goal is to toughen up and go after what he wants.

While the main pairing gets most of the screen time, there are some other interesting characters. Yeom Hyo Bong (Jung Joon Young) is the young photographer who chases after Hyun Woo. He is charming and outgoing, unlike Joon Soo, and he oozes confidence, which fascinates her. Joon Soo’s family, who took Hyun Woo in while she lived in Seoul, is a lovely foil for the couple, serving as expositional commentary in a loving Korean family format. Go Yoon as Jae Joong and Lizzy as Min Ah play the main couple’s friends who nurse a burgeoning romance of their own. Unfortunately, none of these characters really get their own story lines, but they are still engaging. Only Lee Seo Jin as the cheating Lee Dong Jin isn’t quite as winning, which is the nature of his character.

Above all the film critic analyses come “the feels.” You guys know what I mean by those. That warm sensation in the bottom of your stomach that develops into butterflies when you watch a perfect couple together. The happiness that bubbles within when they have fun together, cry together, and finally kiss.

“Love Forecast” delivers on all the juicy goodness that is requisite of a film. It isn’t meant to be a think piece, but a movie that carries you along for a satisfying emotional journey. Lee Seung Gi is adorably charming as Joon Soo, who struggles to find a love that will accept him as he is, a kind-hearted man who wants to do right by his woman. Moon Chae Won is winning as the free-spirited Hyun Woo, who, like Joon Soo, needs someone who accepts both her beauty and poise along with her potty mouth and raucous drinking habits. Seeing these two very compatible opposites together is a delight that should not be missed.

“Love Forecast” is now available on Viki. Watch and let me know what you thought in the comments below!

Check out the trailer:

Raine0211 is a lover of all things Korean, especially K-pop, K-drama, and Korean food. When she’s not writing for Soompi, she’s playing the cello and singing. She happily indulges in all kinds of K-pop, but her biases are SHINee, Infinite, and VIXX. She lives with her sister, her roommate Elsa, and her two cats, Timmy and Momo, all of whom also love K-pop and K-drama.