There’s always been the age old question of, can guys and girls be friends? Well, these 6 female stars absolutely think so! Here are 6 female stars who have been publicly dating but they’re still cool with their guy friends.

Former Girls Day member Hyeri revealed that she’s been dating fellow Reply 1988 co-star and actor, Ryu Joon Yeol since August of 2017. However, she proves that just because she’s been in a happy relationship doesn’t mean she can’t maintain her guy friendships!

Hyeri was on the panel for variety program Amazing Saturday for the past three years but recently left the position to concentrate on her acting. During her last episode, people were quick to notice that a noticeably sad Hyeri was seen hugging SHINee member Key. Netizens commented on the embrace, “wow her boyfriend must be cool with her embracing another man” or “she’s chill to have skinship like that with someone who’s not her boyfriend”.

This relationship is known all across the K-Pop world as Girls’ Generation member Sooyoung has been dating for the past 8 years! That is unheard of as a K-Pop idol, but fans love the commitment that the girl group member has had for her actor boyfriend, Jung Kyung Ho.

As global as Sooyoung is known to be, her guy friendships aren’t any different. She was photographed with French singer and songwriter Vianney, which sparked a lot of interest. It’s been revealed that the French singer has always looked up to the Girls’ Generation member. With that confession, the friendship and photograph seem that much cuter.

Actress Park Shin Hye has been publicly dating fellow actor Choi Tae Joon since 2018 and the couple is still going strong. While he is currently serving in the military, the actor couple have been looked upon by netizens with high favor.

Park Shin Hye is famous in the entertainment world for having numerous friends, including male friends. While she may have a multitude, the most famous male friendship that she has is with F.T. Island member Lee Hong Ki. The two met back in 2009 during the filming of their drama, You’re Beautiful and ever since then, they have been inseparable.

HyunA is another fellow K-Pop lady who has been publicly dating for some time now! HyunA and former Pentagon member E’Dawn have already been dating for 4 years. This relationship news created quite a stir in the K-Pop world in the beginning, but now everyone has embraced the couple due to their sweet and affectionate nature for one another. 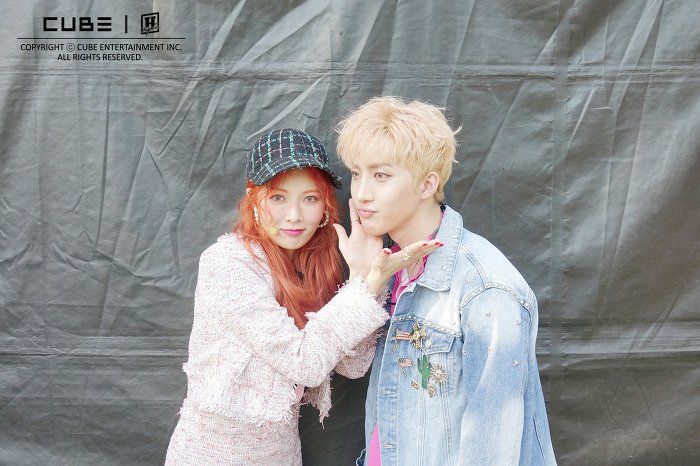 During their Triple H promotions, it seems that HyunA and Pentagon member Hui developed a close friendship as they were frequently photographed together. HyunA was really living the dream promoting with her boyfriend and a close guy friend in one group!

Actress Lee Sun Bin made headlines when it was announced that she was dating actor Lee Kwang Soo! It had been revealed that the two started dating after they met on Running Man. The two actors have been dating for the past 2 years, exciting all their fans.

Lee Sun Bin is known for having a chill personality, making her easy to get along with. With that said, she also has many male friendships and is famous for her chemistry with her male co-stars. She recently took a selfie with fellow Team Bulldog: Off Duty Investigation co-star Ji Seung Hyun showing off their close friendship.

Last but not least is former Nine Muses’ member Kyungri! Kyungri made headlines back in 2019 when she revealed that she was dating former 2AM member Jeong Jinwoon! They admitted that they had been dating since late 2017, revealing their 3 year relationship status.