For those who don’t know, Asians (especially Asian-Americans) and Pacific Islanders have been receiving immense hate ever since the COVID-19 virus began. Much of the hate has turned violent, with more than 2,100 incidents reported in America between March and June of 2020 alone (with hundreds still happening every day). It has now reached about 3,700 incidents (that have been reported) and is growing more and more violent, such as slashings, beatings, and verbal abuse.

While there were many incidents, and all were equally terrifying, the most recent incident truly spurred on a strong reaction for justice. Yesterday, Tuesday, March 16, it was reported that 8 people (including 6 Asian women) were shot and killed at three different massage parlors in Atlanta, Georgia. This caused people to further push movements and hashtags such as #StopAsianHate, #AsiansAreHuman, #RacismIsNotComedy, #StopAAPIHate, and more, with even many celebrities chiming in.

One of the celebrities happens to be the music company 88rising. It is an American mass media company that primarily helps Asian-Americans and Asians promote in the United States. Artists under them or have worked with them include Joji, Rich Brian, GOT7‘s Jackson Wang, Chungha, Kris Wu, and more.

They recently posted on Instagram a yellow square and a message of support for the movement against Asian hate. 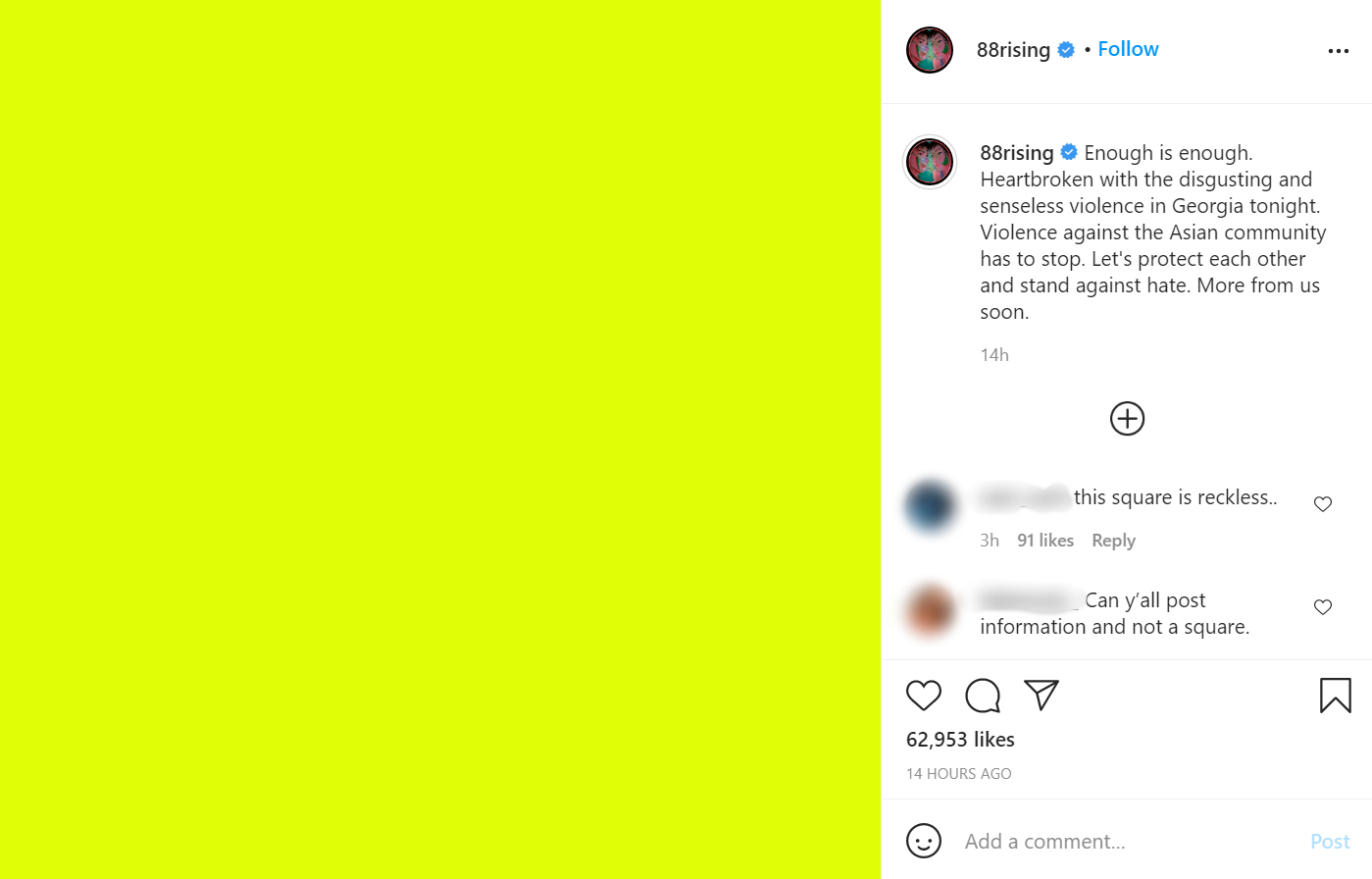 After this was posted, the phrases “Yellow” and “88rising” began briefly trending on Twitter. It is apparent that they are attempting a similar thing to the #BlackOutTuesday movement that posted black squares to start a discussion on African-American violence. However, African-Americans discussed that that was a “performative act” and that people should have been posting information rather than black squares.

88rising is receiving the same criticism for not using their platform to share information and using the color yellow. Using “yellow” in the context of Asians has long been a racist term used to discriminate against and demean them. So, using a yellow square for a pro-Asian movement seemed extremely odd, almost like going backward.

Fans are hoping that the trend stops early and people post helpful information instead of a “performative” yellow square. To support the movement, you can: educate yourself about the situation and Asian struggles, donate to recovery funds and other charities, speak up and report incidents that you witness, and overall help amplify Asian voices for justice.