More Accusations Against Former Stray Kids’ Woojin Revealed, Including Drugging And Getting A Fansite Pregnant

More people are sharing their accounts of events that happened with former Stray Kids member Woojin, including a person claiming to be his ex, and there was even an accusation that he got a fansite pregnant. Following the initial reveal, others have come forward and claimed Woojin also sexually assaulted them as well.

First, a netizen who claimed to be his ex-girlfriend shared how she was also a victim of Woojin’s actions.

Hello!! I am Kim Jinwoo’s ex-girlfriend. My friends told me that people on Twitter were saying they were sexually assaulted by him, and that gave me the confidence [to speak out]. I thought I should mention to everyone that I was also a victim.

Some people believed this netizen was fake, but she later clarified that she was Chinese, She also mentioned that Woojin had multiple other ex-girlfriends, and she was afraid about Woojin finding out who she was. 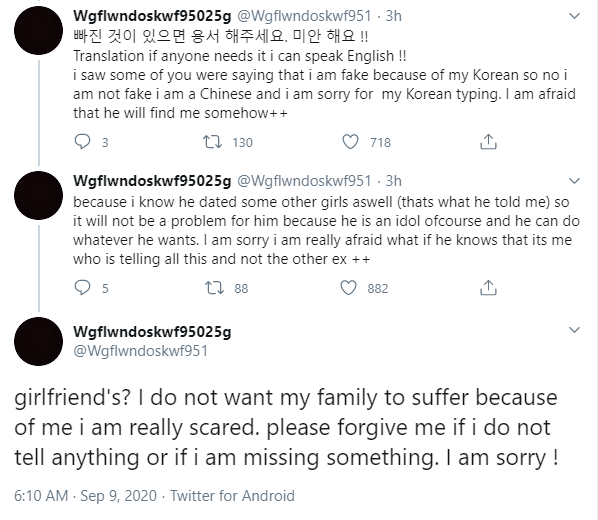 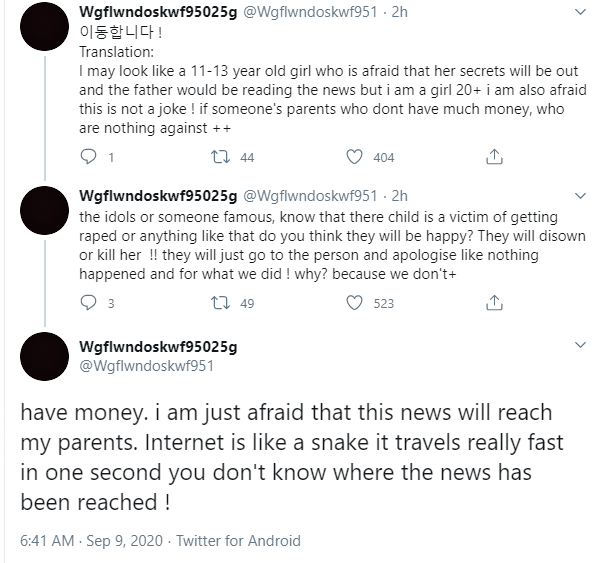 A rumor about Woojin getting a fansite pregnant surfaced, and the netizens’ explained that this was in connection with his sudden departure from Stray Kids, as an agency must have some special or serious reason to allow their group’s main vocalist to leave right before a comeback. 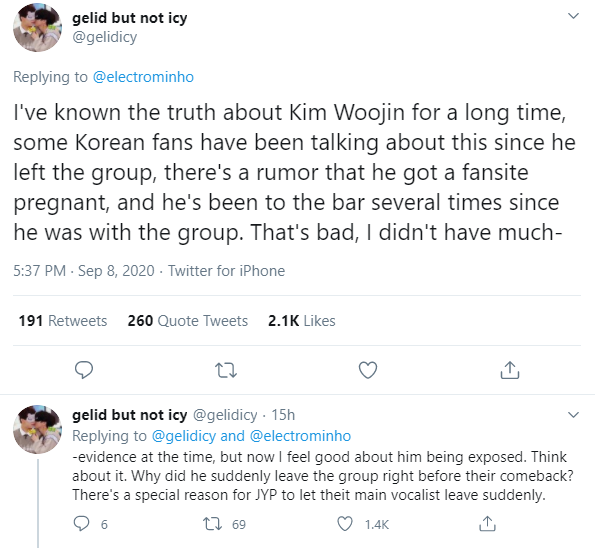 After some more speculation, one Chinese netizen’s accusations towards Woojin was revealed, and it was here that the accusation of Woojin drugging and getting a fansite master pregnant started. 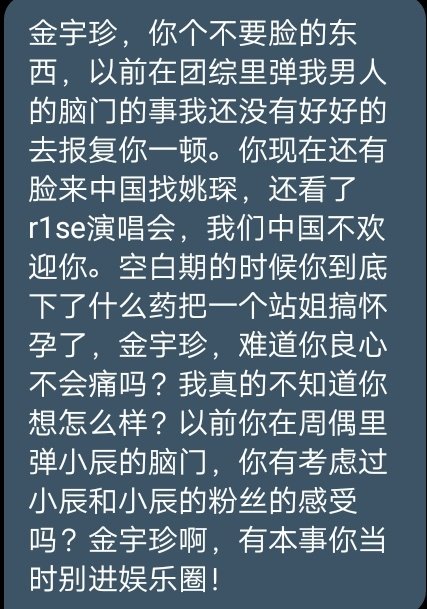 Kim Woojin, you are so shameless. I didn’t hold anything against you when you did that on the variety show, but now what. You have the audacity to come to China and find Yao Chen and watch R1SE’s concert? China won’t welcome you.

When you were on hiatus, I don’t know what drug you used, but you drugged a fansite master and got her pregnant. Kim Woojin, doesn’t this hurt your conscience? I don’t know what you want to do, Woojin. Have you ever thought of Yao Chen’s feelings? If you have the guts, don’t ever step foot into the entertainment industry again.

In this post, Yao Chen is a member of R1SE, a Chinese boy group formed through survival show Produce Camp 2019. Yao Chen was also a trainee at JYP Entertainment, and even trained with some of the Stray Kids members, so it’s natural they would remain close.

Finally, another netizen spoke out on the sexual assault she experienced one night at a bar where Woojin was also at. 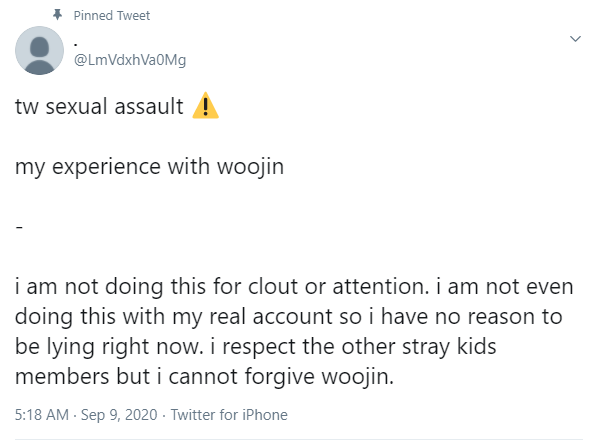 She stated how she was in Seoul during a break, and just turned 19 so she was of legal drinking age in Korea. Because of this, she went to a bar with some friends, and Woojin was there. She got drunk, and Woojin started to make his advances towards her. 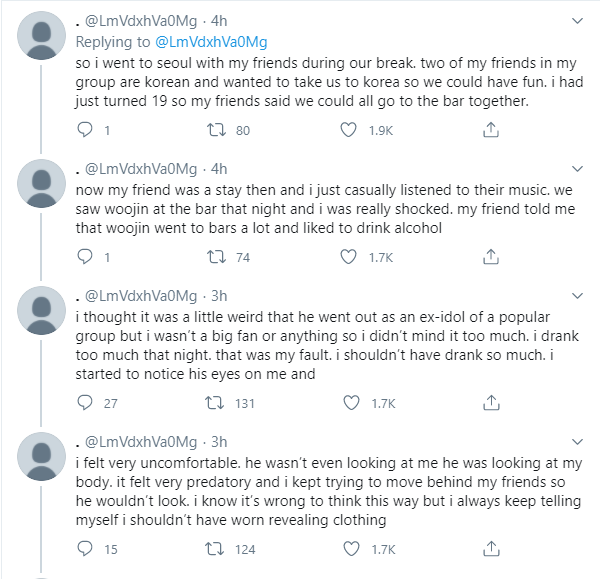 She states that she fits the ideal western woman body type, and because of that, Woojin became attracted to her. She wanted to leave, but didn’t, and that was her mistake. She was trying to go to the bathroom when Woojin grabbed her. 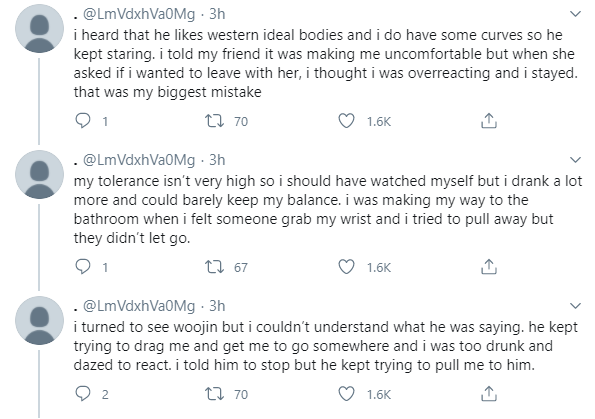 She tried to get him to stop, but in the end, she claims Woojin was touching her on her chest and butt. She didn’t know what to do until the next morning, where she broke down.

She tried to defend what he did, but in the end, came to the conclusion that Woojin didn’t make a mistake. 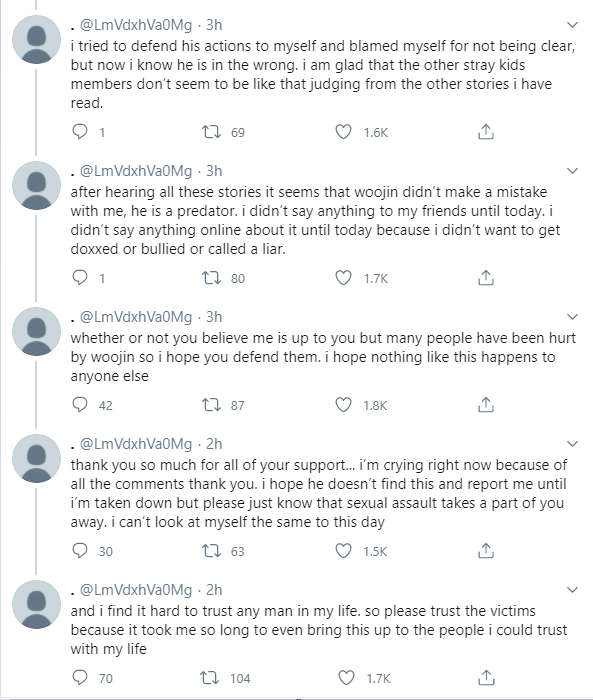 Former Stray Kids member Woojin recently had his agency, 10X Entertainment, make a statement regarding the sexual assault accusations made against him, but some netizens think it’s a bogus agency, one he even made up himself.