Actor Kim Jung Hyun also reportedly refused all forms of skinship during his promotional photoshoot with Seohyun for their MBC K-Drama Time.

According to an exclusive report from Hankyung, Kim Jung Hyun refused all forms of skinship during his couple photoshoot with Seohyun for Marie Claire to promote Time. 10 days before Time‘s press conference, Marie Claire was scheduled to shoot a melodramatic pictorial with both Kim Jung Hyun and Seohyun together. However, the only photo containing both actors was one where they were sitting over 30 cm apart, refusing any contact. 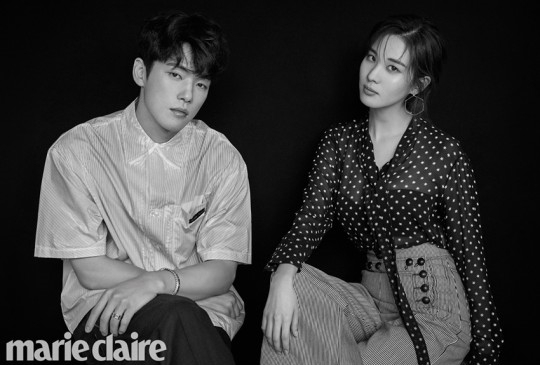 When there are couple pictorials, the staff shooting the pictorial will send the models a set of poses and the desired atmosphere in advance. The whole purpose of promotional couple pictorials is to showcase the chemistry between the two subjects, especially to show off emotional characteristics that may not be fully evident in the actual drama or movie.

All the suggestions we made were delivered in advance, such as the poses to make and the atmosphere of the photoshoot. It’s not common for someone to refuse skinship in a couple photo shoot, which made the editor in charge feel embarrassed.

From my understanding, Kim Jung Hyun even refused a request for a picture where Seohyun’s hand is on his shoulder.

Hankyung was able to obtain copies of the poses and atmosphere Kim Jung Hyun and Seohyun were supposed to convey during the photoshoot, and they showed the natural skinship of lovers, giving backhugs, touching foreheads, and leaning on each other’s shoulders. They were supposed to have 2 or 3 couple cuts as well as solo cuts, and give off an atmosphere of coolness.

In the end, he refused all skinship poses during the actual filming, and everyone on set must have felt embarrassed.

Promotional schedules such as interviews, photoshoots, and variety show appearances are all optional. If you say you don’t want to do it, you don’t have to. But when you said you will do it, and you already checked the draft proposal, but then you refused the skinship on set, there were many people saying it was weird, more than the people who said it was unprofessional or his true self.