Park Bo Mi, who played Do Bong Soon’s best friend in “Strong Woman Do Bong Soon,” had nothing but love for her co-star Park Bo Young.

During an interview on April 17, Park Bo Mi revealed how she was able to successfully film her very first drama. “Park Bo Young gave me so much strength. If it wasn’t for her, it would’ve been really hard for me. She consistently helped me with my acting even though she was probably exhausted from filming all her scenes. There was one scene where I had to cry, but the tears just wouldn’t come out. Park Bo Young then came over and gave me a hug, and I started bawling. She somehow has the ability to bring out my emotions,” Park Bo Mi expressed. 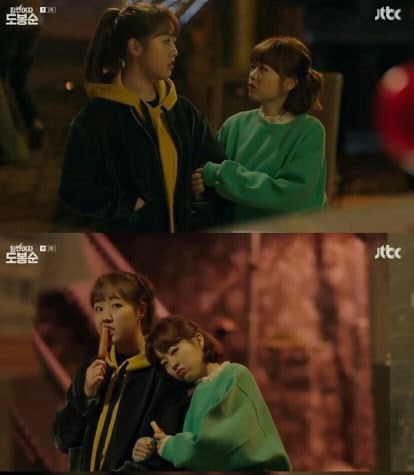 The actress further explained how Park Bo Young had helped her. “I was only used to acting in musicals and plays, so I had no idea where to look when I was in front of a camera. Whenever I had a hard time, Park Bo Young went over to a spot and just stood there so I could look at her while acting. I thanked her every single day. In one of the later episodes, there was a scene where my character thanked Do Bong Soon, and I was seriously about to cry because I was so grateful,” she shared.

Park Bo Mi concluded the interview by saying that Park Bo Young was a great friend and an amazing actress who never made it obvious that she was tired.

Meanwhile, you can watch the first episode of “Strong Woman Do Bong Soon” on Viki!