Actress Seo Shin Ae, who rose to stardom with her role in High Kick Through The Roof and her iconic nickname “bbanggu ddonggu,” uploaded a cryptic Instagram story…

…which is now being thought to be in response to CUBE Entertainment‘s statement about (G)I-DLE Soojin‘s school bullying allegation. Seo Shin Ae and (G)I-DLE’s Soojin went to the same Waw Middle School in Hwaseong city in Gyeonggi Province, Korea.

Fans made the connection when the anonymous person who initially accused (G)I-DLE’s Soojin of being a school bully briefly mentioned a “Miss Seo” in the allegation. The post read, “You used to bully Miss Seo on the way to school, by screaming and cursing at her every day.” 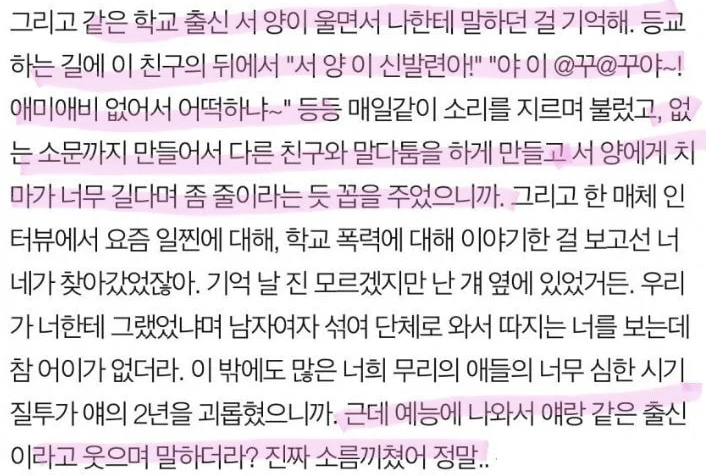 I remember talking to Miss Seo about you. Everyday, on the way to school, you’d call scream behind her. You’d say things like, “You little b*tch” and “You bbang– ddong–.” You’d even mock her like, “What are you going to do without your parents?” You also made her get into fights by spreading rumors about her. You kept pressuring her to tailor her skirt shorter, saying that it’s too long.

When she talked about school bullying in one interview, you actually confronted her with a group of your friends. I don’t know if you’ll remember, but I was there with her. You kept asking if that is how she treated you. I remember feeling completely baffled by your audacity — because you and your group of friends did put her through hell for two years. But it was by far the worst when you later appeared on some TV show and talked about how you and her go way back.

In fact, back in 2012 — during an interview about her bully role on the show SOS, Seo Shin Ae did talk about how she fell victim to school bullying as a middle school student. She emotionally claimed, “The bully called me bbanggu ddonggu and kept mocking my acting career.”

Interviewer: Do you have any personal experience with school bullying?

Seo Shin Ae: Yeah, back when I appeared on High Kick, I was bullied about the role. The kids at school made fun of me, calling me by the nickname “bbanggu ddonggu.” They mocked by acting career and poked fun at how I’m a “celebrity.” I was in 6th grade when I appeared on High Kick. The bullying continued into middle school. Because of the role, I got teased about being dirt poor, even though I wasn’t.

Seo Shin Ae’s Instagram story reads, “None of your excuse.” Though the message itself is cryptic, Seo Shin Ae fans believe it is the actress “finally confronting her bully.”

Actress Seo Shin Ae has always been praised for her active involvement and promotion of school bullying prevention campaigns. In August 2013, she became the Korean National Police Agency’s “School Bullying Prevention Ambassador.” She also took on several roles in K-Dramas that shed light on bullying problems, such as Solomon’s Perjury and Nalaola (Soar Up).

Seo Shin Ae fans are rallying for the actress.