Box office hit “Along With the Gods: The Two Worlds” has hit the 4 million mark!

The cast and director released photos to commemorate this milestone, in which they smile and hold balloons that say 400. (In Korean, numbers are expressed in tens and ten thousands. In this case, 4 million would be read as 400 ten thousand in Korean). 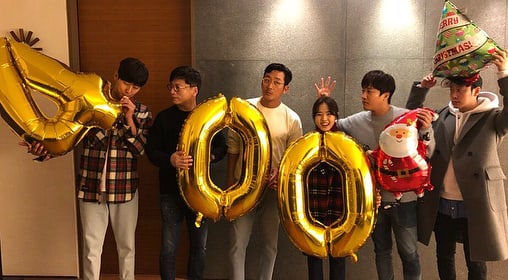 The film is the first in a two-part release about a deceased man who is aided by grim reapers as he takes on seven trials in the underworld over 49 days. Six days after its premiere, at around 7 a.m. KST on December 25, the film surpassed 4 million moviegoers. It has beaten the records of films “Assassination” and “Avengers: Age of Ultron” by one day, as well as that of “Ode to My Father,” which achieved 4 million moviegoers in 12 days.

It has also broken the daily record of moviegoers with a total of 1,252,910 tickets sold on December 24. The record was previously held by “A Taxi Driver,” with 1,123,910 tickets sold in a single day. “Along With the Gods: The Two Worlds” achieved 1 million moviegoers within three days of its premiere, 2 million within four days, and 3 million within five days, and now 4 million in six days, breaking many records not even a full week since its premiere.