On August 23, the upcoming film “Memoir of a Murderer” held a V Live broadcast with the director, Won Shin Yeon, and the cast, including Sol Kyung Gu, AOA’s Seolhyun, and Oh Dal Soo. 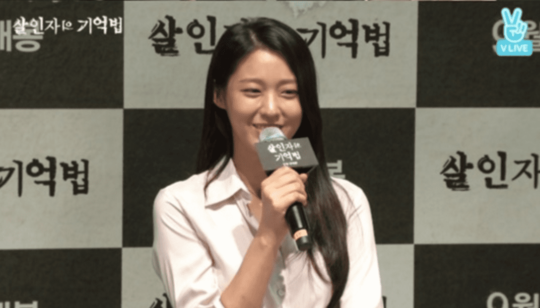 In the film, Seolhyun and Kim Nam Gil, who have previously talked about their age difference, play a couple. During the broadcast, Seolhyun said, “Even right before we went into filming, he would joke around and the atmosphere would be happy.”

She continued, “But as soon as the cameras started rolling, the look in his eyes went through a 180-degree change. After seeing the scary side of him once, even his laughter was scary. It was still scary after filming ended. When he smiled while talking, it was scary,” she added with a laugh.

“Memoir of a Murderer” is a thriller based on a novel by Kim Young Ha. It is scheduled to be released in September.