ASTRO has finally made their long-awaited comeback!

On January 16 at the COEX Art Hall, ASTRO held a comeback showcase for their first full-length album “All Light,” which  is an album that contains ASTRO’s hope to shine forever in the garden of eternity where lights never fade while they dream with their fans AROHA.

To show how they’ve transformed, ASTRO members introduced themselves with keywords like Rocky “who wants to become a werewolf boy,” JinJin, “the root of the gardeners,” Cha Eun Woo, “a cool person that’s tried ear clips for the first time,” Moonbin “who wants to be in charge of sexiness,” MJ “who’s trying on color lenses for the first time,” and Sanha “who’s just come of age.” 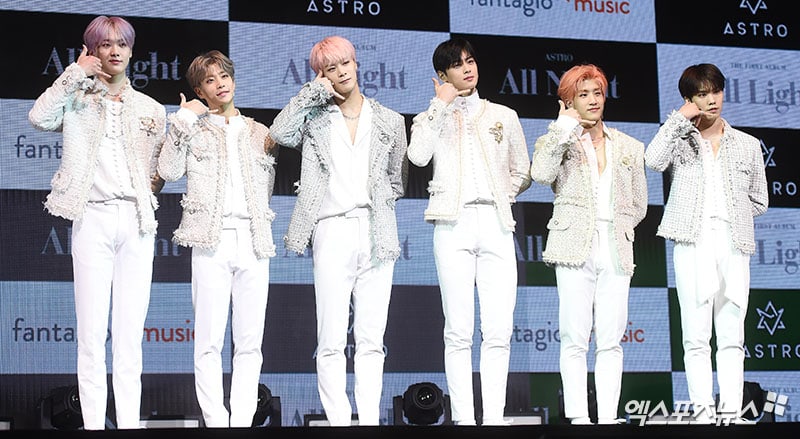 At the showcase, Sanha said, “Since it’s our first full-length album, I’m excited and nervous at the same time. We’ve prepared very hard. I hope you support us a lot,” while MJ shared, “Our resting period was long. We’ll show our cool side that will express how much we’ve missed the stage.” Cha Eun Woo said, “We worked hard on all 10 songs. I hope you all like it and show a lot of interest,” while Rocky added, “I’m looking forward to this because I’ve always wanted to do a dreamy and sexy concept. Please show lots of interest.”

To introduce their album, Moonbin shared, “We put our sincerity into all 10 songs, and there is even a song that our members composed. Many events occurred before this album’s release. After looking for advice and talking with the members, I realized that the most important thing is to enjoy the current moment. Since we are also human, there are times when our conditions aren’t the greatest, but I think even then we should enjoy the moment. I’ve gained more strength thanks to the support of our fans.” 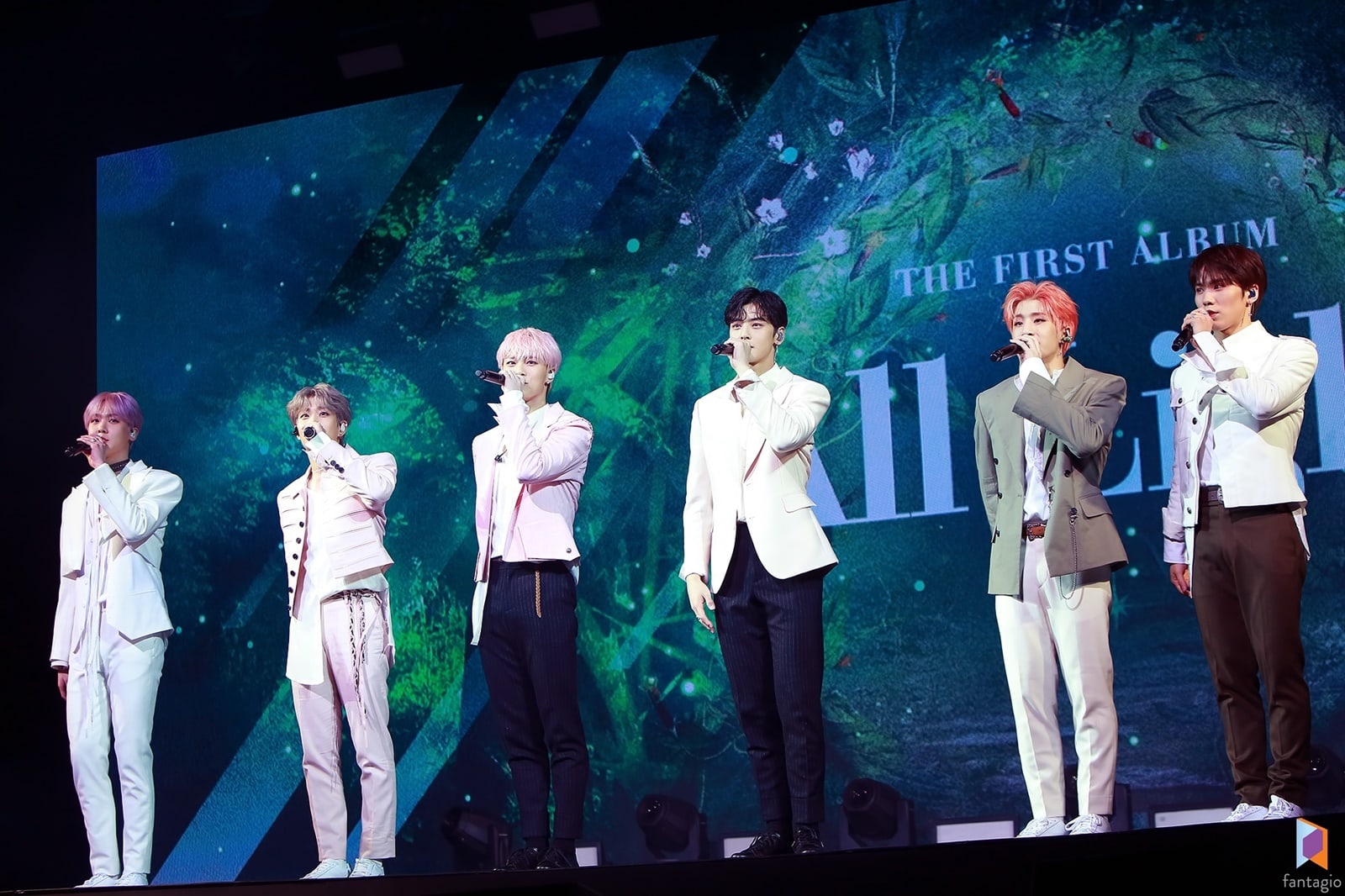 Last year, ASTRO experienced many ups and downs. While ASTRO made headway when Cha Eun Woo started a “face genius syndrome” after starring in JTBC’s “My ID Is Gangnam Beauty,” the members went through a lot of pain when issues arose within their agency and Fantagio Music CEO Woo Young Seung was fired.

JinJin said, “We’ve become faster in team-related aspects. We’re faster at working on choreography and recording songs. As the members increased their individual skills during the resting period, I feel like we now approach team-related aspects with more detail.” Moonbin also shared, “I’ve started to think a little deeper, and I can think from others’ perspectives. I shouldn’t think about multiple things at once, but there are so many things to think about. I think I’ve matured after talking with the members, and I’ve especially realized the importance of the older members. In the case with JinJin, I’ve always talked to him a lot. He’s great at listening, and it always feels like I’m getting a solution. MJ is the oldest, but I feel comfortable with him because he talks to me honestly.”

Sanha shared, “Now that I’m 20, I’ve reached the age in which I have to start taking on responsibilities. It’s somewhat sad, and I want to go back to being a minor. “Since the last album, we’ve shown that we’re growing. I think I came out with the sexy concept as well because we’ve grown with this album too.”

About their past, Cha Eun Woo said, “At the time of our end-of-year concert, I had a hard time and suffered a lot. But I always told myself that if I want to keep growing, there has to be pain. I think that because those events occurred, we will be able to grow more wonderfully after our comeback. We’ve gained the strength to rise. Now, it’s not hard at all, and I’m fine.” 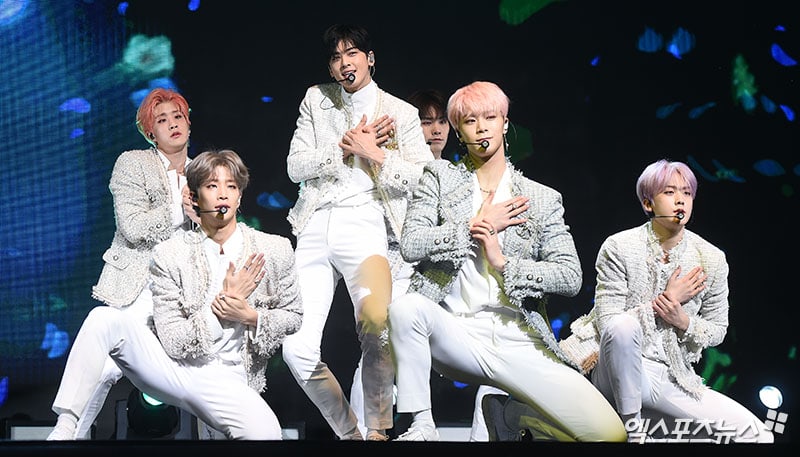 ASTRO’s title song “All Night” is a well-made pop song that honestly expresses one man’s desire to call his lover as he waits for a call deep into the night. LDN Noise, who also wrote “Crazy Sexy Cool,” participated in producing the song, helping to showcase ASTRO’s refreshing and matured vocals.

The music video was filmed by producer Dawittgold, who perfectly captured ASTRO’s dreamy and mysterious charms. He visualized the feelings of love from a significant other as a flower that has bloomed beautifully in the fantastic dream-like garden. The video contains various meanings, including the idea that gardeners ASTRO are protecting the flowers that represent love and feelings.

Cha Eun Woo also shared, “I’m of the feeling that I should do my best with the tasks that I’m given. Since we’ve returned as ASTRO, I want to show many people that our team is cool, fun, sexy, and has great teamwork. We’re trying to do our best to work hard. Also, it’s nice to promote as six because it’s fun. We chose the songs among many demo songs after each person shared their opinions. All six of us are highly satisfied.”

JinJin also confidently said, “We showed our slightly matured sexiness through ‘Rise Up,’ and with this album, we want to share our relaxed, dreamy sexiness. It’s an album that our members actively participated in. We talked to the company about various aspects of the album ranging from the choreography to the album concept, and a lot of our opinions were included. We’re highly satisfied. I think it’s the best.”

Moonbin explained the choreography, saying, “It portrays angels that came down from heaven. At first, we thought about dancing bare-feet. While it’s difficult because the choreography involves a lot of sitting, I think it came out well. Personally, I wanted to show the image of different colors being added to water and becoming integrated. We’ve always had something in addition to our ‘refreshing’ concept, and this time, it’s ‘refreshing, dreamy, and sexy.’” JinJin added, “We’re going for the concept of shining brighter when light is shone on us. The point choreography is the ‘soft soft dance.’” 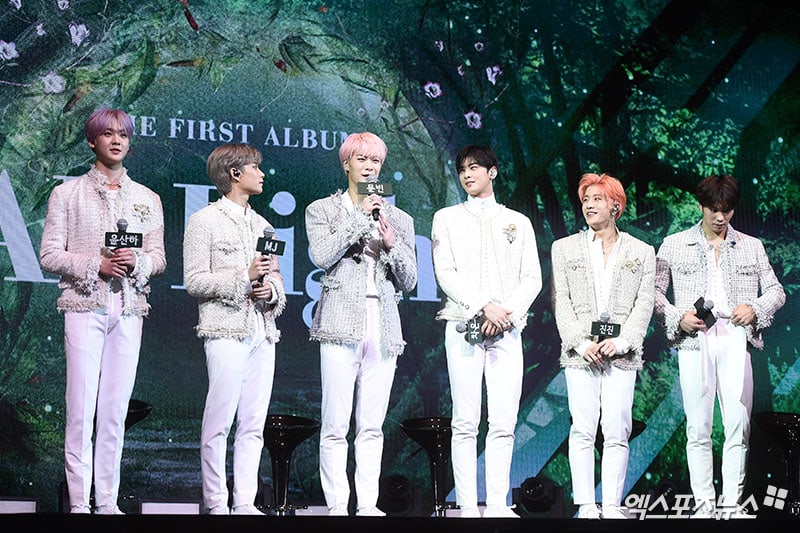 On the topic of their first self-composed song, JinJin shared, “It’s a ballad song that’s different from the songs ASTRO has sung in the past,” and MJ said, “It’s meaningful that a song we made was added to our album for the first time. It’s an honor since it’s our first full-length album and because our members did so well.”

With the release of “All Light,” ASTRO will promote actively with their title song “All Night.” Regarding their hopes for the comeback, MJ shared, “I hope ASTRO earns the title of ‘fantasy boyfriend’ and ‘idol I want to call’ through this promotion.” Rocky added, “Since you should always aim high, my goal is to get first place, but it’s hard. It’s 2019, so I hope ASTRO can rank 19th on music charts. I hope we look more luxurious to the general public.” JinJin said, “If we achieve our goal, my dream is to perform with an angel concept,” and Moonbin and Cha Eun Woo shared their hopes to make 2019 ASTRO’s year. Finally, JinJin said, “We came out to make this year shine. I hope we gain good results.”