Let’s be real, we have all come to know and love BTS‘s Jimin due to his many charms. An extra charm that we can add onto the list is the fact that he is a baby whisperer. No, but like really. Netizens found a baby who only smiles for Jimin’s part in their song “Dynamite” and let’s just say, we are completely obsessed!

Originally uploaded on TikTok, the user posted the adorable video with the caption, “my nephew falling in love with Jimin over and over again.” The user plays “Dynamite” for the adorable little baby to which he initially has no response to…

…that is until Jimin’s part comes on and his glorious voice is blasting through the speakers! Do you see his little itty bitty smile? Do you? It’s okay if you don’t because the user came through and showed her nephew falling in love with Jimin multiple times. Get ready because this is just a warmup.

Here we go again with round two. The baby is sporting a pretty cool spaceship bib while being completely mesmerized by the group’s “Dynamite” music video. We feel you little one, it’s a funky video. Again, you see the baby watching the video with a pretty neutral facial expression.

That is, until Jimin’s voice comes back on. Look at that massive smile! We literally cannot with how adorable this baby is. Just look at that toothless smile and super squish-able cheeks! Not to mention that this tiny human has literal hearts in his eyes. He loves Jimin and he just can’t deny it!

Okay last one, but only because this kiddo is so freaking cute. This time our friend is sporting a very fun, very red holiday friendly onesie. You know the drill at this point. His neutral facial expression tells us everything we need to know. Where is Jimin’s part, gosh dang it?

Ah, there it is! His entire face just lights up as soon as he hears Jimin’s voice. Seriously, how could you not fall in love with this little guy’s bright smile? He could light up an entire stadium with it!

This wouldn’t be the first time Jimin proved his title as a baby whisperer. After his song “Serendipity” dropped, many Twitter users came forward sharing their stories about Jimin’s voice soothing their upset children!

Jimin is also known to be amazing with children overall and he showed it on stage at the 2019 SBS Gayo Daejun when the group performed with a special little girl. During their performance, Jimin was captured holding the girl and the amount of cuteness in one photo made everyone go wild for the BTS member. Look at his fatherly smile!

Honestly, we totally get it. BTS is a pretty phenomenal group overall, but something about Jimin and his voice just hits different. 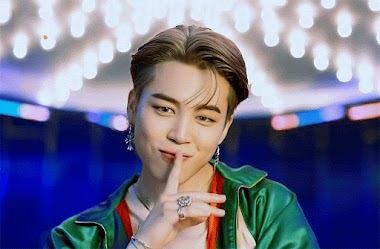 If you want to see the entire video of this mini Army in the making, check out the Twitter post down below!

[VIDEO] Watch this adorable baby being mesmerized by Jimin. He has such a good aura that people of all ages are captivated by him. pic.twitter.com/KwYcAqiTzH