“Happy If You Died” revealed a new poster of Baek Jin Hee carrying around her evil boss Kang Ji Hwan!

KBS 2TV released a new poster for its upcoming drama “Happy If You Died” on October 29. The drama will tell the story of an evil boss Baek Jin Sang (played by Kang Ji Hwan) and an outspoken assistant manager Lee Luda, (played by Baek Jin Hee) who tries to change him into a better person.

The revealed poster raise viewers’ curiosity as there are no traces of anger or sensitivity in Baek Jin Sang’s face. He looks comfortable and purely happy while being carried by Lee Luda. On the other hand, Lee Luda is dressed nicely and has a heroic look on her face. Her determined expression and posture remind viewers of Wonder Woman and her extraordinary powers.

The tagline also captures viewers’ attention. Lee Luda is saying, “I will protect you without mercy… Chief.” Lee Luda used to hate her boss, but her tagline allows viewers to guess that a situation where only Lee Luda can handle had happened to Baek Jin Sang, raising the anticipation towards the show. 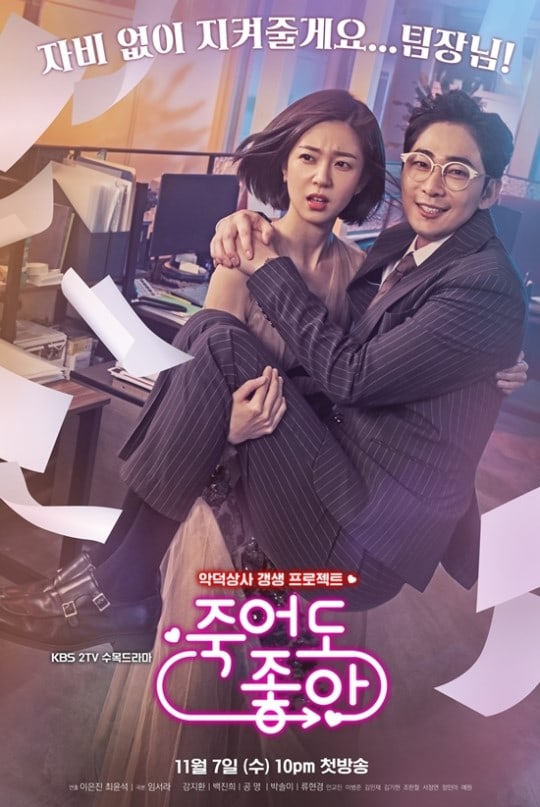 “Happy If You Died” will premiere after the finale of “The Ghost Detective.” It will air on November 7, 10 p.m. KST. You can check out Baek Jin Hee’s latest drama, “Let’s Eat 3” on Viki below. You can also check out Kang Ji Hwan’s current variety show, “Real Men 300” on Viki too.