The identity of “Gameboy” was finally revealed on MBC’s “King of Masked Singer”!

On the April 8 episode, “Gameboy” appeared for the second round of the singing competition. Unlike the sweet vocals he showcased during the first round, “Gameboy” surprised the audience by perfecting the difficulty melody and high notes of M.C. The Max’s “Goodbye for a Moment.”

After defeating “Moulin Rouge,” he continued onto the third round where he sang K2’s “To Her Lover” against “Scallop.” Although “Gameboy” won the round to challenge the king, he was unable to beat the currently-reigning champion and revealed his identity.

The identity of “Gameboy” was none other than N.Flying member Yoo Hwe Seung!

As soon as he turned around, the celebrity panelists recognized him from when he previously appeared as a panelist on the show. They commented, “Wow he’s so good at singing,” “He’s so good,” and “When he was sitting here, I had no idea that he sang that well.”

Yoo Hwe Seung introduced himself as the youngest vocalist of N.Flying and told the story of how his parents were against his dream of becoming a singer. 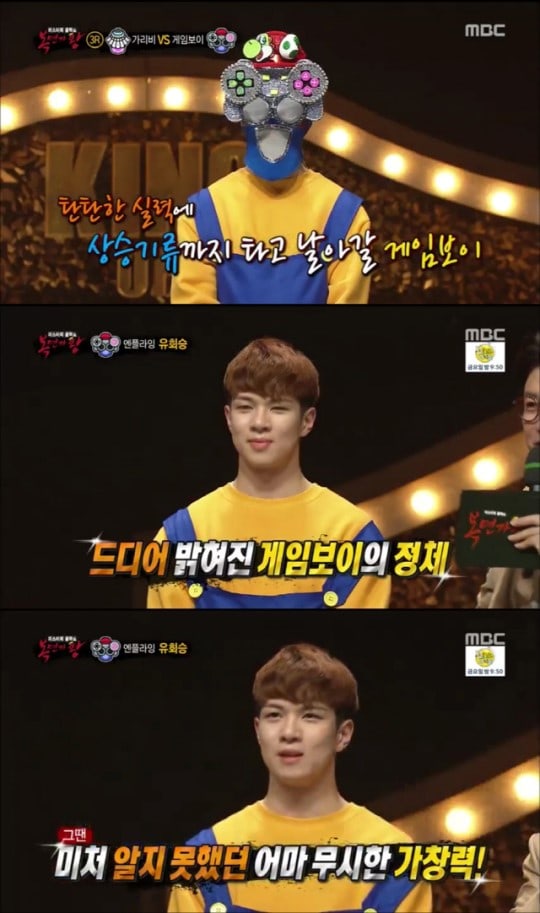 He said, “Since I was young, my parents owned a karaoke room and since I came into contact with music, I naturally dreamed of becoming a singer. My parents were so strongly opposed to it that after I went to school and completed my military service, I begged my parents to let me live my life.”

He concluded, “That year, I joined an idol survival program,” and referred to his appearance on Mnet’s “Produce 101 Season 2” that led to him becoming the newest addition to N.Flying.

Watch the latest episode of “King of Masked Singer” now!