Producer Bang Shi Hyuk and BTS held a press conference on the day of the last concert for “2017 BTS Live Trilogy Episode III The Wings Tour The Final.”

When asked about what the distinct characteristic about BTS’s music is, Bang Shi Hyuk answered, “In terms of music, Black music is the base. Even when doing many genres like house, urban, and PBR&B there’s no change to the fact that it is Black music. The boundaries of music genres are being broken globally. We are also embracing this and making it BTS style.”

Bang Shi Hyuk explained BTS’ success and said, “We never targeted the overseas market consciously. A variety of causes gathered. It might be tiring for analysts but I can’t say there is one success strategy.” 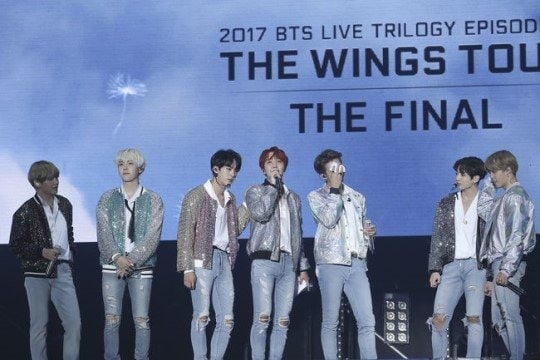 Bang Shi Hyuk further commented, “Please view Billboard, the AMAs, and appearances on talk shows from the big three U.S. broadcasting stations as invitations rather than entering [the U.S. market]. Targeting the U.S. market as a business model, signing contracts with U.S. companies, and making members sing in English is already not K-pop. That is an American artist and how singers debut in the U.S. market; it’s not done with K-pop. There’s no rule that they have to use English. Even though they sing in Korean, foreign fans like it.”

Lastly, Bang Shi Hyuk stated, “One of the words that defends BTS is talk about how [people] can sing along when they don’t even understand the language. I cannot prejudge about singing in Korean, but I think the meaning and sincerity is more important to global ARMYs. They receive comfort and encouragement from BTS’ songs. Many people listen to BTS’s songs with diverse languages being translated in real time. There are people who listen to the performance and music and those who want to understand the lyrics can see translations through YouTube easily.”