The streets of Seoul were incredibly alive last week as the 2017 F/W Hera Seoul Fashion Week was held at the iconic Dongdaemun Design Plaza on March 27 to April 1. The venue was filled with sounds of excitement from fashion squads who trooped to the venue all dressed to kill, while the clicks of the cameras were directed not only to the trends, but also to K-pop idols who filled the front rows. Here are this season’s standout style stars:

Tiffany is probably South Korea’s answer to Gigi Hadid, except that she’s a pop star, model, social media sensation, and guest magazine editor all rolled into one. The Girls’ Generation member was a style fixture the whole week as she attended several shows as a trend spotter and to support her favorite designers.

Her signature style is always ladylike, but with a hint of edginess that shows the world that she can do both cute and chic at the same time. For the Push Button show, she wore a classic black dress; for KYE, feminine hip hop wear with a pink skirt and jacket combo. At the FleaMadonna show, Tiffany wore a sheer dark printed dress with ruffled butterfly sleeves that made it seem like she had wings. 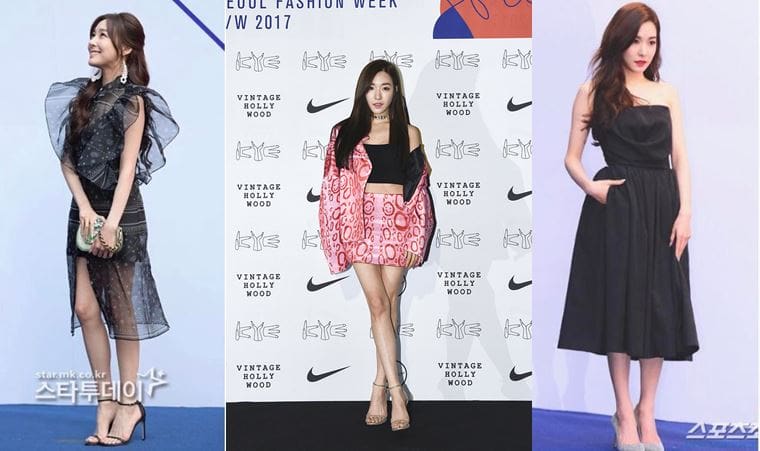 Hyomin is making a name as quite the style icon. Even previously, she was known for her multi-tasking role as T-ara’s costume concept designer, showing off her quirky and innovative taste for style.

She watched quite a lot of shows, including Yohanix, YCH, Resurrection, and Studio K with fellow member Eunjung. Her choice of look had a common theme: ultramodern and cool. She keeps it understated with one standout point, whether it’s a striped suit, a cool skirt, suit jacket with side strings paired with a tee, or a stunning emerald green outfit with ruffles.

Seohyun didn’t need to get all glammed up to show off her best look. All she needed were classic white and black outfits and bright red lipstick, and she’s done. While she’s still the maknae (youngest) of Girls’ Generation, she’s coming into her own as a solo artist and an actress, and she’s choosing looks that are more grown-up with a touch of sexy, while still keeping her trademark innocent charm. 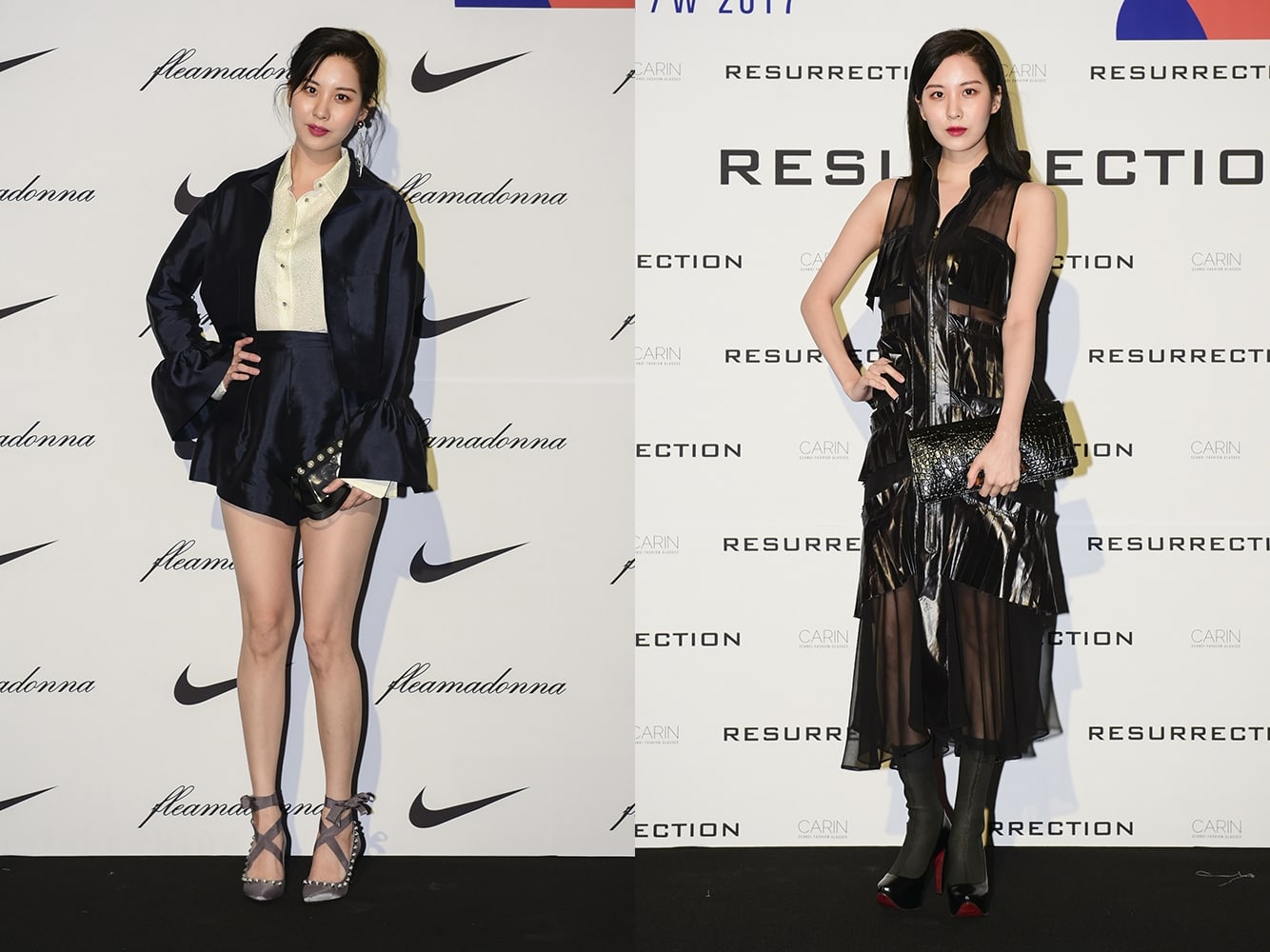 It’s great to see Nicole out and about in Seoul Fashion Week, as many fans are missing her and the members of what was once the nation’s girl group, KARA. Nicole is still as cute as a button, rocking her red hairstyle and the off-shoulder trend. 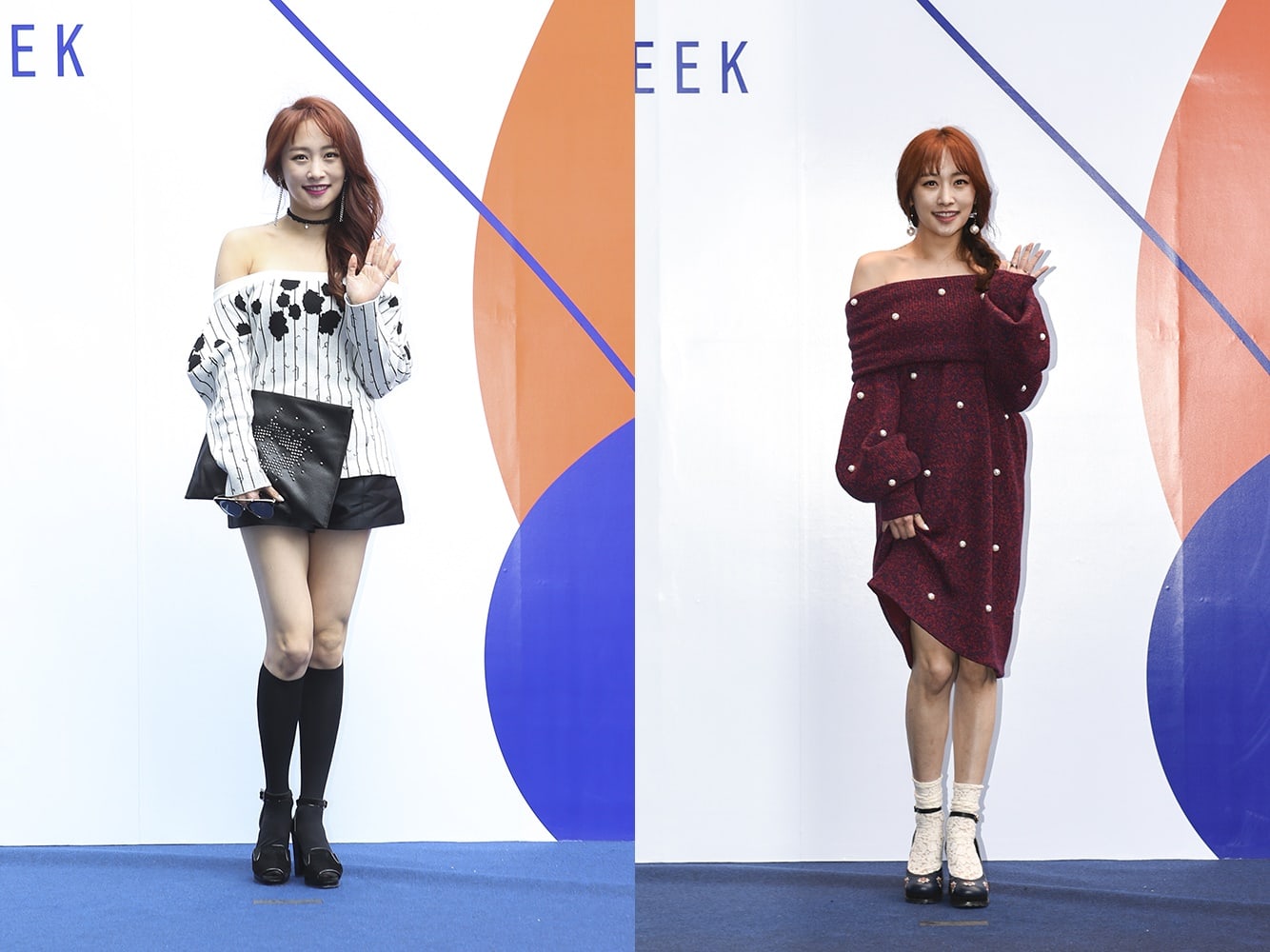 Gong Minzy is expressing herself more in terms of style, veering away from her usual hip-hop, oversized streetwear looks to more sleek, form-fitting outfits. She went out to support her designer friend Jain Song in matching black pieces, with slit pants and a textured jacket. 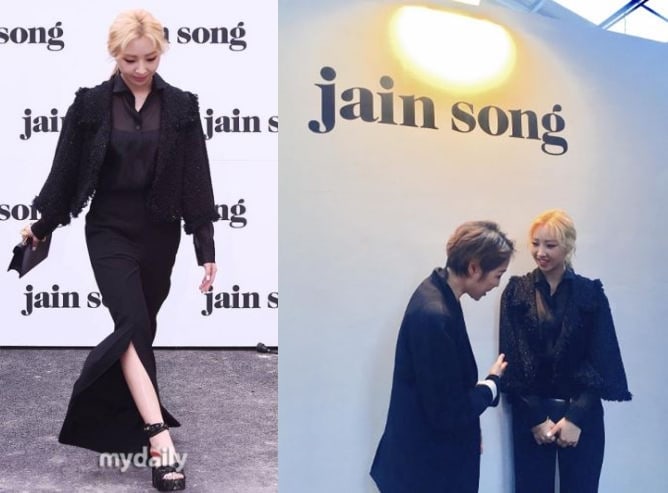 If there’s anyone who redefines what it means to have effortless style, it has to be SISTAR’s Bora. The sexy idol chose a variety of outfits for her Seoul Fashion Week appearances, but it’s always simple, sporty, and easy to wear. With all the runway shows she attended, she chose comfort while still not scrimping on style. 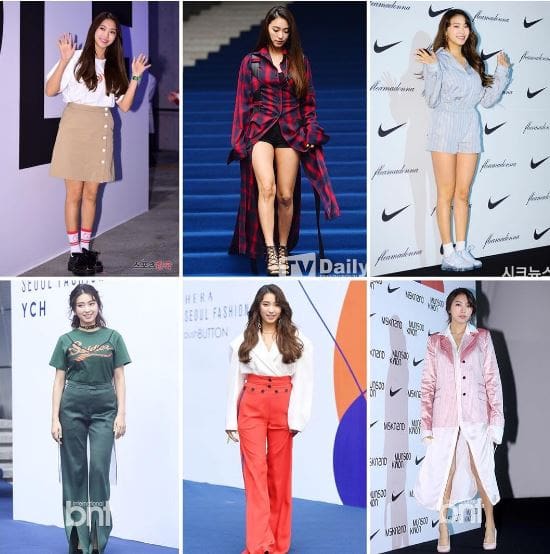 The best accessory is your beauty, as they say, and the beauty award goes to Seulgi of Red Velvet. For the KYE show, she wore an all-black sophisticated look with a lace turtle-neck and wide-legged pants, but what stood out was her natural, flushed makeup look that almost seemed like she just woke up all fresh and pretty. Her hair was styled in the trendy curly side bangs often seen in magazine fashion editorials. 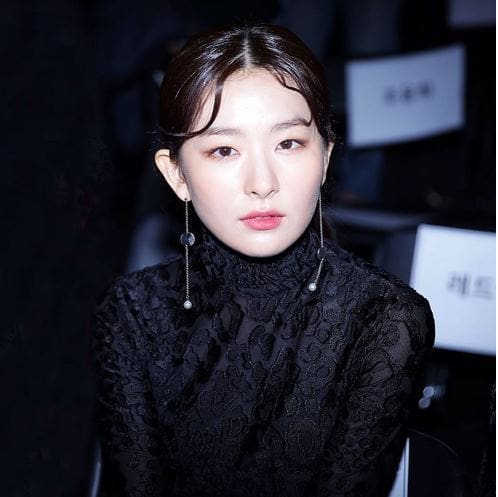 makinochan is an English magazine writer and fashion fan whose goal in life is to wear heels and find the best OOTD locations while living in the farm outside of Jeonju, South Korea.