“Black Knight” tells the story of one romanticist man who accepts a dangerous fate for the woman he loves. At the press conference, PD Han Sang Woo introduced “Black Knight,” saying, “It’s a drama that incorporates stories from past lives, and explores how the character gets to experience new things after encountering a fateful power after a tragedy, and ends up regaining his fateful love. It’s a story I’m quite confident in.”

He highlighted certain things to watch for, stating, “A mystical figure isn’t the main character, so it’ll be easy to relate to even as though it’s a fantasy melodrama. Rather than focusing on a person with super powers, viewers will be able to relate more to the emotions portrayed by the male and female leads. I ask that the viewers focus on these emotions.” 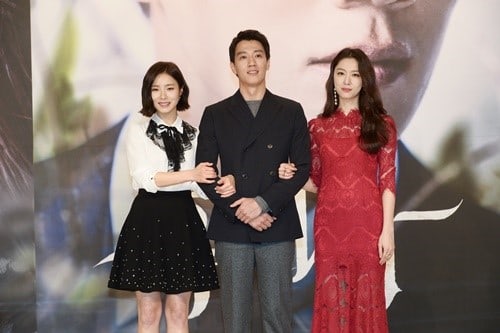 Regarding possible similarities to other fantasy romance dramas, like “Goblin” and “The Legend of the Blue Sea,” PD Han Sang Woo explained, “One may think its similar because they’re all considered the same genre. A differentiating point is that every character has a profession. There is a variety of genres [and tropes] that are focused on, not just romance, such as melodrama, slice of life, revenge, suspense, and more. I feel like I’m shooting a different genre every week.” He also reiterated, “While [fantasy romance] was a genre that was famous for awhile, with productions made by famous directors, I can say that another difference is that [the characters] do not have transcendental powers.”

The producing director further raised expectations for the drama by assuring that they tried to create multi-faceted characters.

“Black Knight” will air its first episode on Wednesday, December 6 at 10 p.m. KST.