On November 29, Gaon Chart released its latest weekly chart rankings, with strong showings from Wanna One, BLACKPINK’s Jennie, and TWICE!

Jennie maintained her top spots on the digital and streaming charts for the second consecutive week with her solo track “Solo.” Wanna One’s new album also excelled, earning the top spot on the album and download charts. TWICE has also continued to excel on the charts with “Yes or Yes,” maintaining top positions on both the digital and streaming charts, as well as topping the social charts for another week.

New releases that had strong showings this week also included Highlight’s “Outro,” which placed fourth on the weekly album chart, and EXID’s “I Love You,” which entered the weekly social charts in second place.

Here are the top five for each of this week’s charts:

For the latest physical album chart, Wanna One’s new album “1¹¹=1(POWER OF DESTINY)” came out on top, with the Kihno version of their album ranking third. Second place went to BTS’s “Love Yourself: Answer,” while Highlight’s “Outro” entered the charts in fourth place. Maintaining their spot in fifth place was MONSTA X’s album “Take. 1 Are You There?” 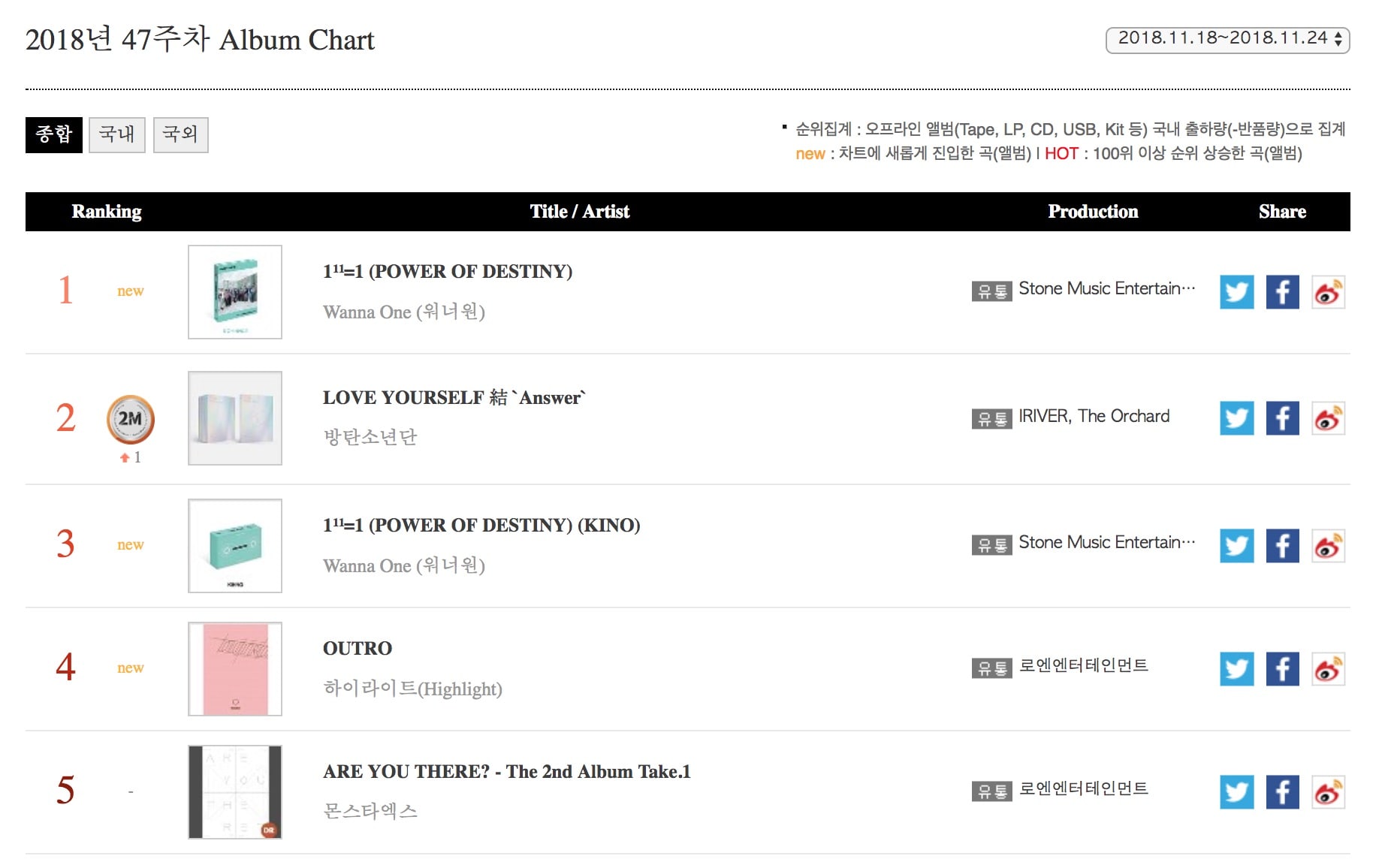 The overall digital chart showed Jennie’s “Solo” holding on to its top spot for another week, with TWICE’s “Yes or Yes” following in second place. New on the charts was Wanna One’s “Spring Breeze” in third place, with Paul Kim’s “Me After You” falling to fourth place. IU kept her fifth place position with “BBIBBI.” 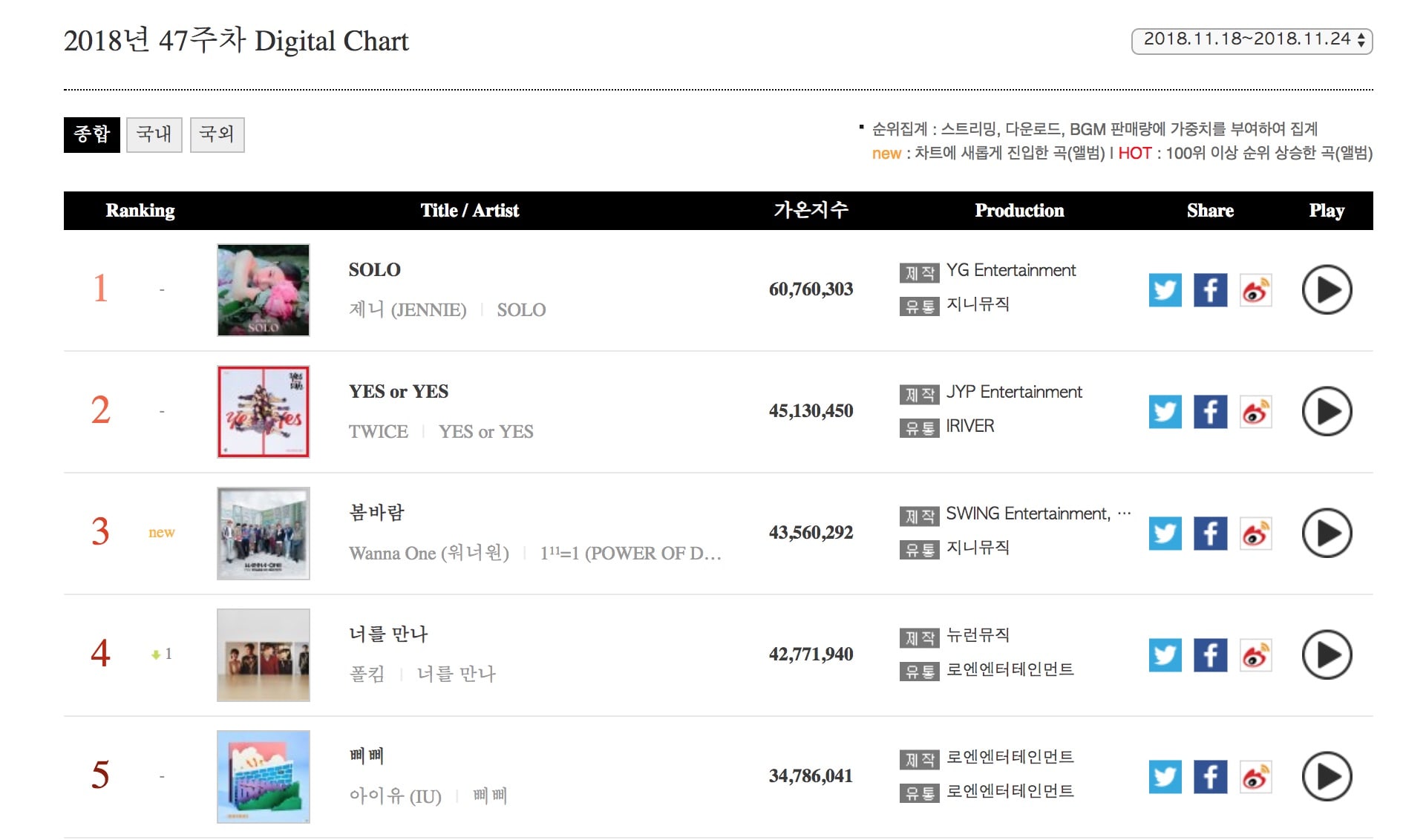 Wanna One had a strong showing as they entered this week’s download chart. They took four of the top five spots, with their title track “Spring Breeze” coming in at first place. “Flowerbomb,” “One’s Place,” and “One Love,” all tracks from Wanna One’s new album, placed in third to fifth place respectively. Jennie’s “Solo” ranked in second place this week. 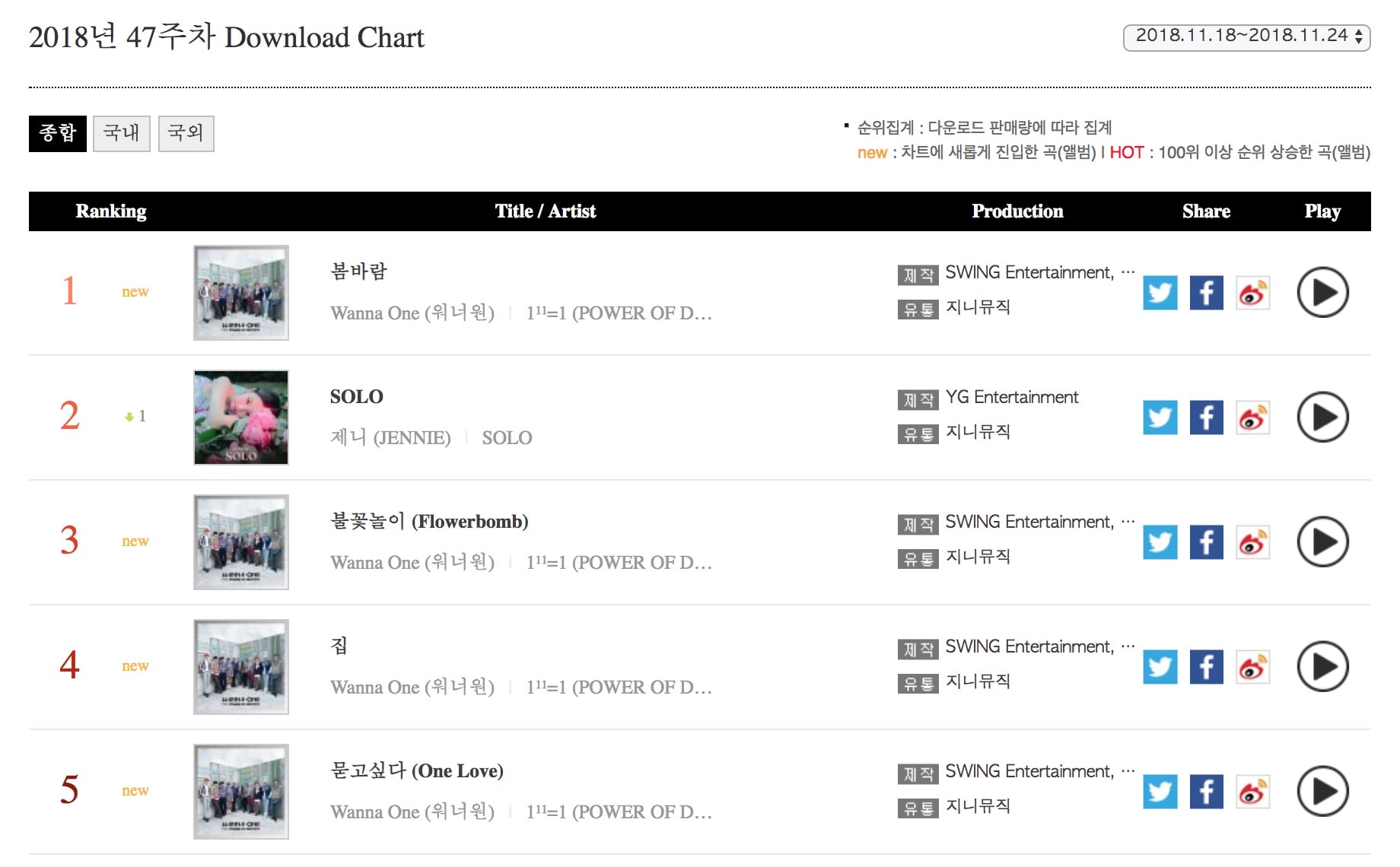 The top five ranks in the streaming chart for the week were the same as last week, with Jennie maintaining her top spot with “Solo.” TWICE came in second with “Yes or Yes,” and they were followed by Paul Kim’s “Me After You” in third place. IU’s “BBIBBI” kept its fourth place position and were joined by Vibe’s “Fall in Fall” in fifth place. 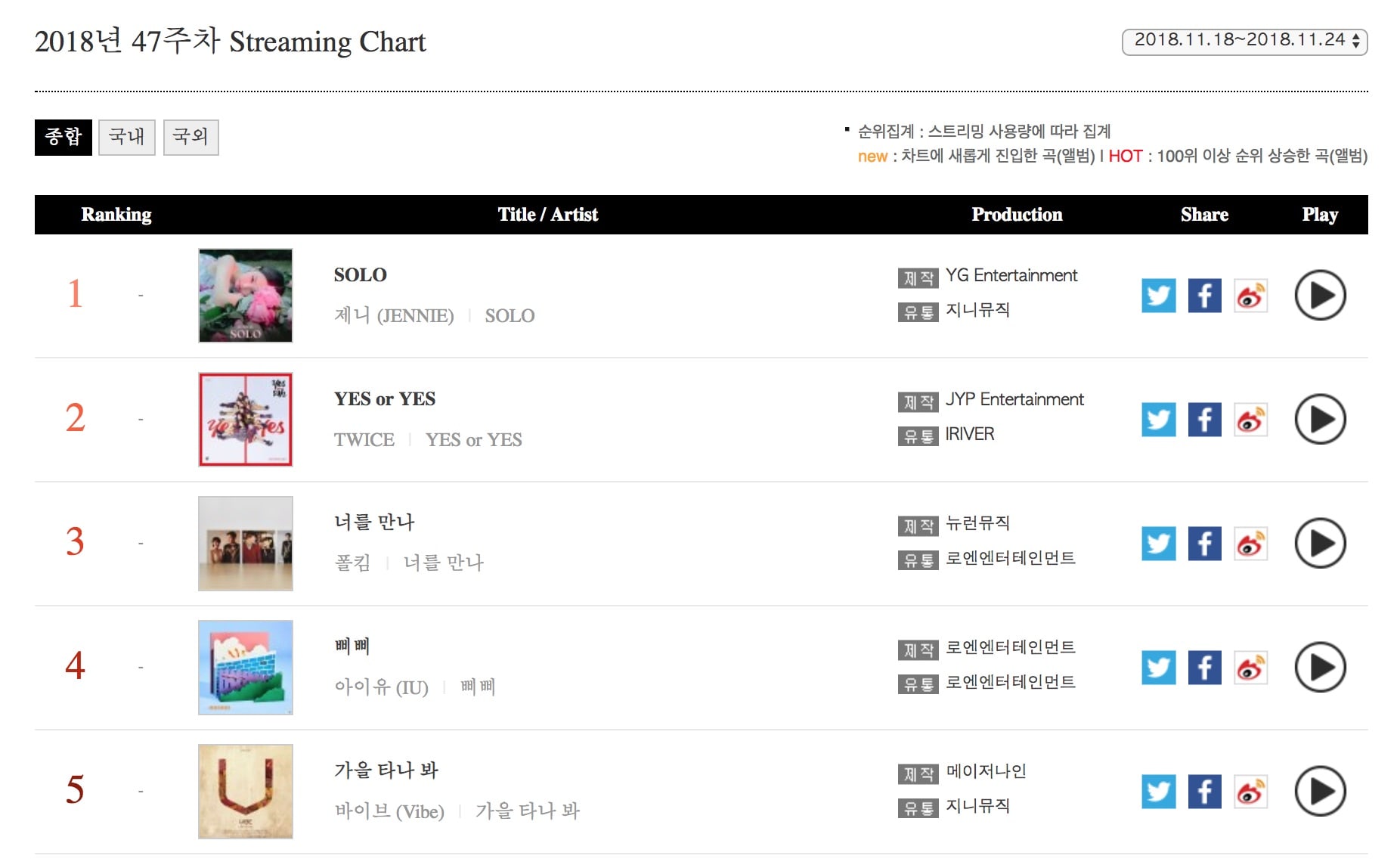 Lastly, TWICE scored another week on top of the social chart with “Yes or Yes.” EXID’s new song “I Love You” had a strong first showing, coming in second on the charts. They were followed by BTS’s “Idol,” and Wanna One’s “Spring Breeze” also entered the charts for the first week in fourth place. In fifth place is BTS’s “Fake Love.” 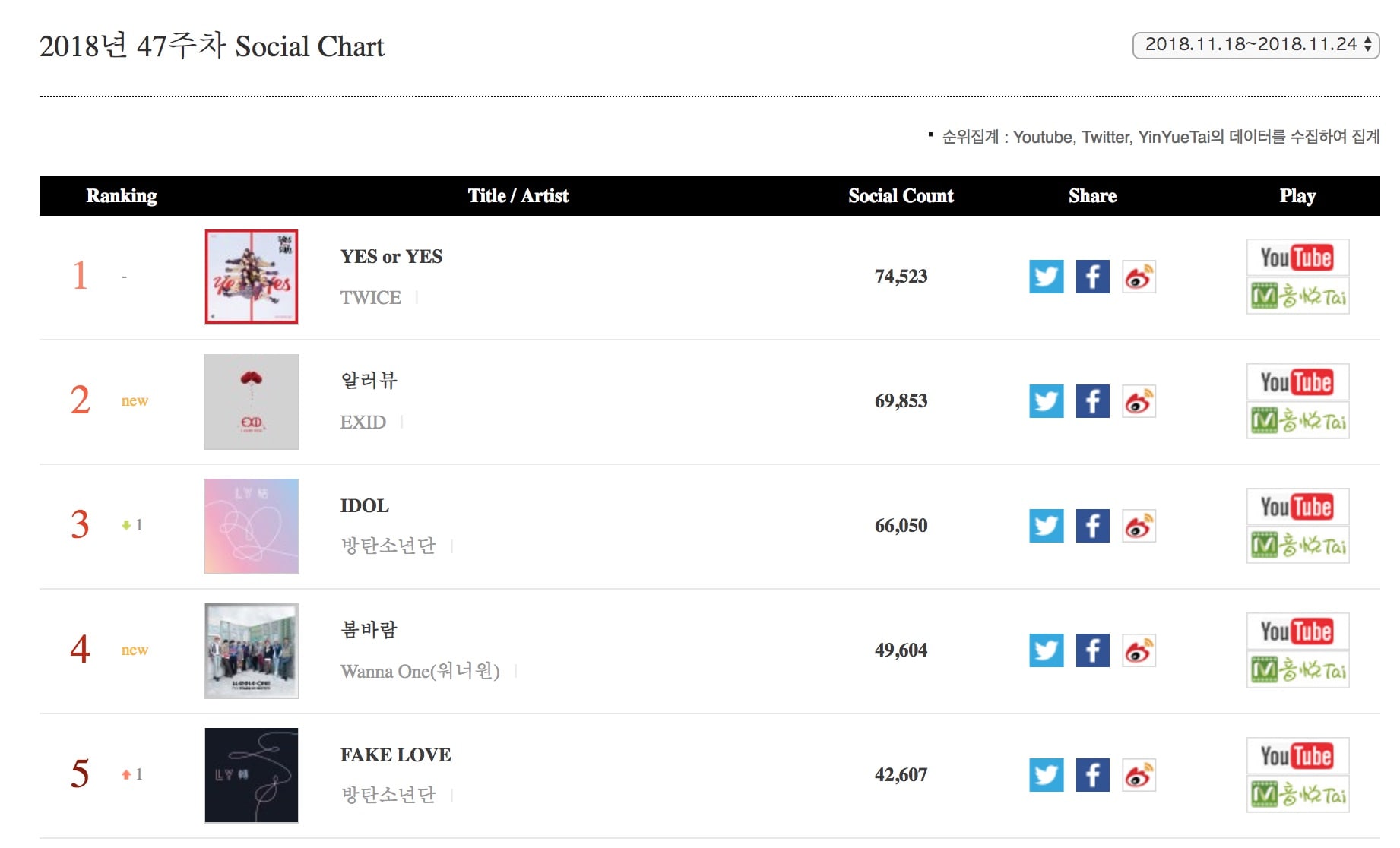