Block B’s Park Kyung has been receiving much attention online for his bold statement about artists that manipulate the music charts for their benefit.

On November 24, he posted a message on Twitter that read, “I wish I could manipulate the charts like group Vibe, Song Hayea, Lim Jae Hyun, Jeon Sang Keun, Jang Deok Chul, Hwang In Wook.”

Park Kyung openly criticized artists and revealed the names of artists who supposedly used the sajaegi method to improve their ranks on charts.

The term ‘sajaegi’ means chart manipulation, and is usually defined by a company bulk buying copies of their own albums in order to get higher on the charts or to have a better chance at winning first place on music programs.”

Although many other artists have criticized this method, it is very rare for someone to reveal the actual names of the artists.

In particular, group Vibe is a senior group compared to Block B, but Park Kyung does not seem to take that into mind when he posted the comment online.

The artists mentioned by Park Kyung are currently at the top of the music charts. However, because the sajaegi suspicions haven’t been formally cleared up, they are not sure what Park Kyung’s fate will be for showing actual names of the artists.

Fans responded with support and respected his confidence in posting a very open comment about the music industry.

“I support your decision to openly talk about this topic. This is something that everyone knows about but is hard to say openly to the public. Love you Kyung!”

I feel like everyone’s hard work goes to waste when musician’s use the sajaegi method to manipulate the charts. I can’t imagine how frustrated you must be about this if I am already this upset over it. I know that no matter what I saw won’t be able to comfort you. But I think you did the right thing to post about it. I trust you and am always on your side! Love you!

Park kyung, please know that these things don’t matter to us anymore and I hope they fix it soon because talent should be recognized and supported not through cheating, we love you so much are so grateful for your talent and music♥️

Park Kyung is not the only one openly talking about sajaegi though. Rapper Din Din, who recently released his first official album, posted on his Instagram, “The music chart is called ‘concrete’ because there is too much sajaegi going on. But I was somehow able to make it into the charts this time. I’ll probably be out on the charts soon.” He added that he wished to do music until there are no more machine manipulations. 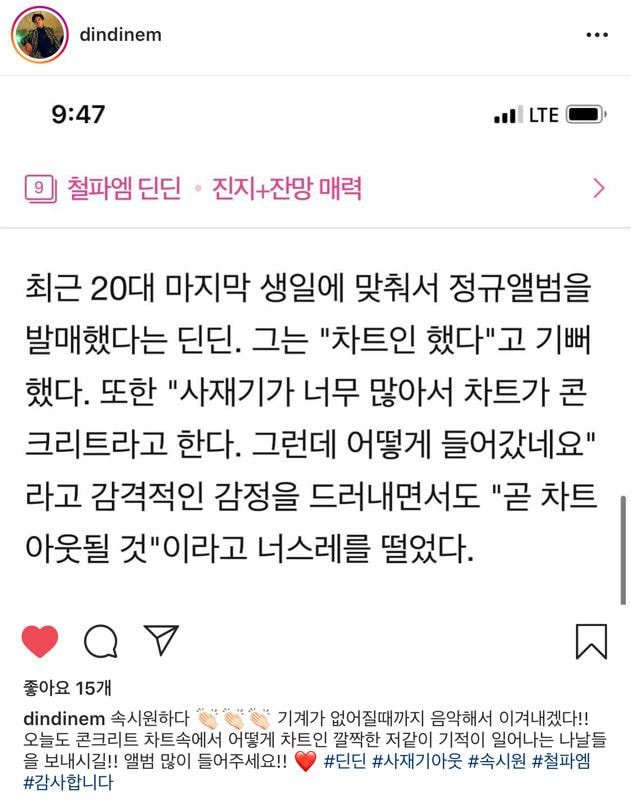 Park Kyung is a rapper and producer and a member of the group Block B. He is known for his appearance on tVN’s Problematic Men where he revealed his problem solving skills. Park Kyung is also a member of Mensa International, an organization for people who score at the 98th percentile or higher on a supervised IQ test.