Kwon Soon Wook is a music video director and one of three siblings in the Kwon family. Through his Instagram, he shared his current cancer diagnosis, and stated that he only has 2-3 months left to live if the prognosis is bad.

Ever since last year, I haven’t been feeling well, so I went on a cycle of taking a break from working and returning to work, disappearing and reappearing.

But now I know that I really am in poor condition and in medical terms, I don’t have much time left.

I have peritoneal cancer and it has metastasized into stage 4. In late December last year when I was suffering from peritonitis, a stent that was placed in my body broke, punctured my intestine which caused enteric perforation and enormous amounts of pain that required emergency surgery.

The hospitals I visit are telling me that my life expectancy is only 2-3 months if the prognosis is poor. In addition to Asan Hospital, which performed the surgery, Seoul National University Bundang Hospital and the Bundang CHA Medical Center judged that there were no errors [during the surgery].

How something like this happened to me, why I am living this kind of nightmare, I can’t believe it all. But when I wake up, it’s reality. As of now, I haven’t been able to eat normally for over two months due to intestinal obstruction, my weight has dropped to 36 kg (79 pounds). The thirst and pain I feel can’t be expressed in words, as my body can’t even absorb an ounce of water. If there are any fluids in my body, it makes it extremely difficult to move.

In the meantime, my mother says I’ll get better but… medically speaking, I’ve lost a lot of hope after seeing my own body dying and the hospital and doctors’ deeming me near death. Even still, I am continuing the treatment that I can receive right to the end and even though I cry everyday with no promise that this pain will end, I am trying hard not to lose hope. This is the first time I’ve cried due to not being able to eat a spoonful of rice…

I was fine up until just a few months ago. I was at the age where I couldn’t work hard enough. But I have realized that cancer at a young age can happen so fast, and it was so scary.

I will let you know from time to time if I get more energy. I recently found out that writing a post on social media takes so much energy. I hope you all take good care of your health and don’t experience this type of pain. That’s all for now.

#Friends, I’m sorry but I’m turning down your phone calls

#Please text or comment only because I am exhausted

#I’ll try my best to respond

Shortly after his post, BoA posted a message of support for her older brother. 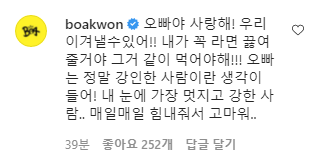 Bro, I love you! We can overcome this!! I will definitely make you ramyun, and we can eat it together!!! You are such a strong person, remember that! You’re the coolest and strongest person in my eyes.. Thank you for cheering me up every day..

In the past, Kwon Soon Wook has worked on the webdrama Bong Soon – a Cyborg in Love, which starred Super Junior‘s Kyuhyun and Yoon So Hee. He is also the founder of Metaoloz, a video production company that has worked with Red Velvet, D-CRUNCH, Baek Ji Young, and of course, BoA.