On April 15, viewers were introduced to Bong Tae Gyu’s family for the first time. Si Ha woke up by himself and greeted the cameramen and cameras that were installed in his living room before waking up his parents.

In his interview, Bong Tae Gyu revealed his reason for why he joined the show. He said, “While filming the drama [SBS’s ‘Return‘], I couldn’t come home a lot so I think Si Ha got upset. When I used to hug and tickle him, he used to like it, but one day he started to say, ‘Stop it.’”

He continued, “It upset me and made me think that I want to repair our relationship. In order to do that, we need to be together for a long time. I decided [to appear on the show] to make him feel better and to apologize.”

Bong Tae Gyu was not only a loving father but also a doting husband. As soon as he opened his eyes, he gave a sweet morning kiss to his wife Hasisi Park, which Si Ha also joined in on. Si Ha then proceeded to give morning kisses to plants in their home. 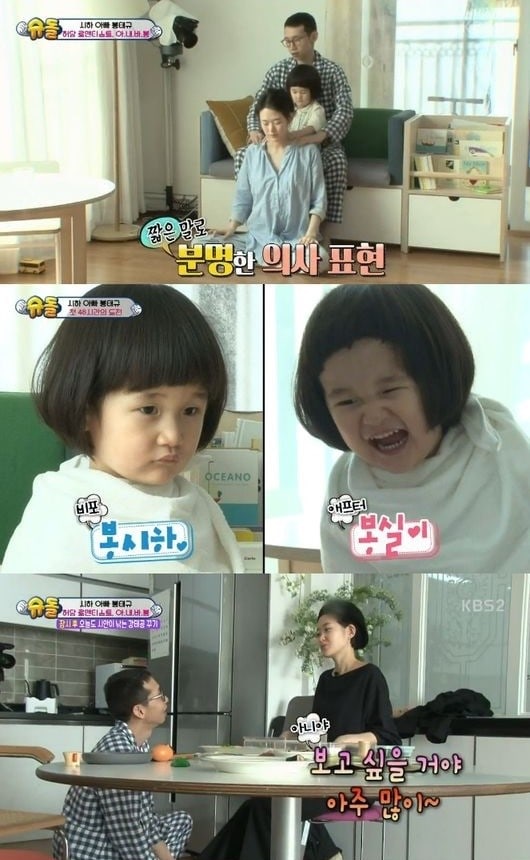 The actor then prepared breakfast for his family on behalf of his wife, who is currently pregnant with their second child. The baby is due at the end of May.

He packed her lunch and put on her socks before saying goodbye. “It won’t be easy to do things with Si Ha, but more than that, it’s going to be difficult not seeing my wife,” said Bong Tae Gyu.

After hearing her husband’s worries, Hasisi Park replied, “I’m also worried about that. I’m mostly worried that my husband finished filming the drama not too long ago, so it might be difficult for him endurance-wise.”

When his 48 hours with Si Ha officially began, Bong Tae Gyu gave him a haircut and trimmed his bangs. They also went to a rice cake store, but had to take a detour when they found out Si Ha lost his shoe on their way there. They distributed rice cakes and introduced themselves to their neighbors as well as the viewers.