On the May 27 episode, Lee Sun Hee appeared on the show as the 10th master.

As always, a mystery informant called into the show to give the members a hint about their master. When the members received the phone from the staff, it turned out to be none other than their first master and singer Jeon In Kwon.

Happy to hear his voice again, the members said, “Master, we miss you” over the phone. He then surprised them by appearing on the set and the members happily cheered.

Yang Se Hyung asked, “Did you bring honey powder?” and Jeon In Kwon made the members laugh when he took some out and gave it to them. Eating the honey powder, Lee Seung Gi commented, “This feels like some sort of deja vu.”

In order to give the members a hint, Jeon In Kwon began, “When singing…” and Lee Seung Gi replied, “I didn’t know you’d tell us this much.” The singer continued to tell them that their newest master was a woman with a small figure, and surprised the cast and crew with very obvious hints. Yang Se Hyung joked, “I knew this would happen. Did the staff not know?”

After listening to the hints, Lee Seung Gi was certain that their newest master was Lee Sun Hee. When it was time to go to the master’s home, Yang Se Hyung asked, “Don’t we need to put in [the address] in the GPS?” and Lee Seung Gi replied, “I know the way perfectly. It will take exactly 50 minutes.” He added, “I’ve stayed before [with the master], but today’s going to be a hard day.”

Their newest master was revealed as Lee Sun Hee and Lee Seung Gi became lost in his old memories. Lee Seung Gi explained, “When I debuted, I stayed and practiced singing in this room,” and asked Lee Sun Hee if she remembered. 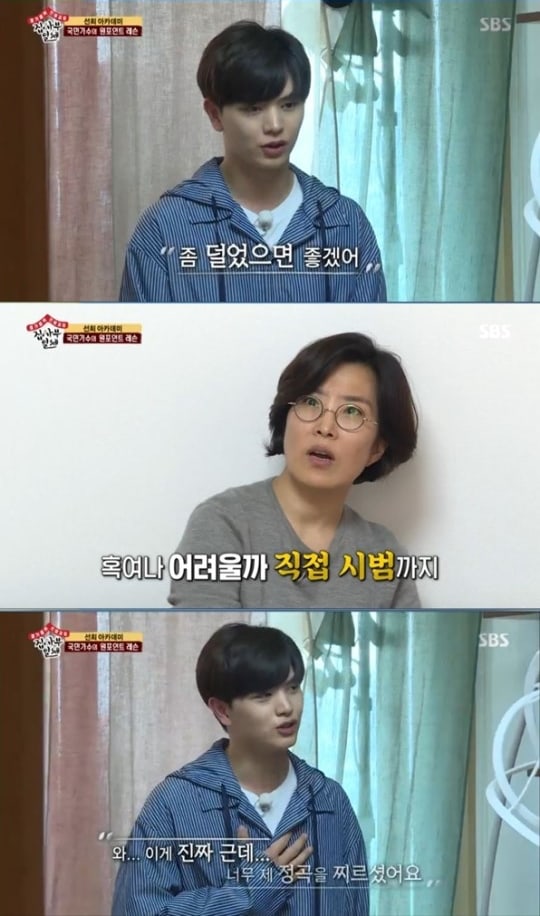 Lee Sun Hee, however, seemed nervous and wasn’t very talkative. When the members asked her questions, she spoke so quietly that they had to lean forward to hear her voice. She finally said to Lee Seung Gi, “I’m so nervous. I trust you.”

When Yang Se Hyung asked, “Do you usually speak this quietly?” she told them about the importance of taking care of her voice. She answered, “In order to work in one field for a long time, you have to normally preserve it.”  After listening to her explanation, Lee Sang Yoon confessed, “You’re really my type. I ask for many of your lessons today.”

Hints of Lee Sun Hee’s lifestyle could be seen throughout her home. Looking around her bedroom, Yang Se Hyung commented, “I think there’s a notebook and pen in every room.” She explained, “In order to save my voice, I usually don’t speak very much.” She also stated that as the reason why she doesn’t use pillows.

The master then gave the members a vocal lesson. Lee Seung Gi, Yang Se Hyung, and Yook Sungjae played the piano in front of her. Yook Sungjae said, “I like Kim Dong Ryul very much and I only know how to play the accompaniment,” and played the beginning of Kim Dong Ryul’s “Old Song.”

Lee Sun Hee then asked the BTOB member to sing and he nervously sang in front of her. Praising him, she said, “Good job, Sungjae.” She then added, “I think Sungjae has many thoughts. Just sing without thinking too much.” Hearing this, Yook Sungjae revealed, “She hit the spot” and listened to her advice.

After listening to all of the members sing, Lee Sun Hee taught them a secret training exercise. About Lee Sang Yoon’s voice, she said, “I don’t think there’s vocalization” and to Lee Seung Gi, she suggested, “Let’s do the training you did in the past.”

The training she was referring to was singing children’s songs with emotion. When the members looked puzzled, Lee Seung Gi sang a rock version of “School Bells are Ringing” (literal title) and said, “I think my style is definitely screaming.”

“Master in the House” airs on Sundays at 6:30 p.m. KST. Watch the latest episode below!