BTS has set a new record with their latest album “Love Yourself: Tear“!

On June 8, Gaon Chart revealed that BTS had sold a record-breaking 1,664,041 copies of the album in just 14 days after its release on May 18. Not only did the figure mark the highest monthly sales of any album in Gaon Chart history, but it also marked the highest monthly sales of any one album (not including repackaged albums) released in Korea since 2000, when ballad singer Jo Sung Mo sold 1,705,127 copies of his third album in a single month.

In addition to topping Gaon’s monthly album chart for May, BTS also took No. 1 on the monthly download chart with their title track “Fake Love.” Furthermore, the group maintained its spot at the top of the social chart for the third consecutive week.

Following BTS’s “Love Yourself: Tear” at second place on the monthly album chart was SHINee’s “The Story of Light EP.1,” with Highlight’s Yong Junhyung’s “Goodbye 20’s” trailing in third. GFRIEND’s “Time for the Moon Night” rose six spots on the chart to claim No. 4 for May, while Teen Top’s “Seoul Night” debuted at No. 5. 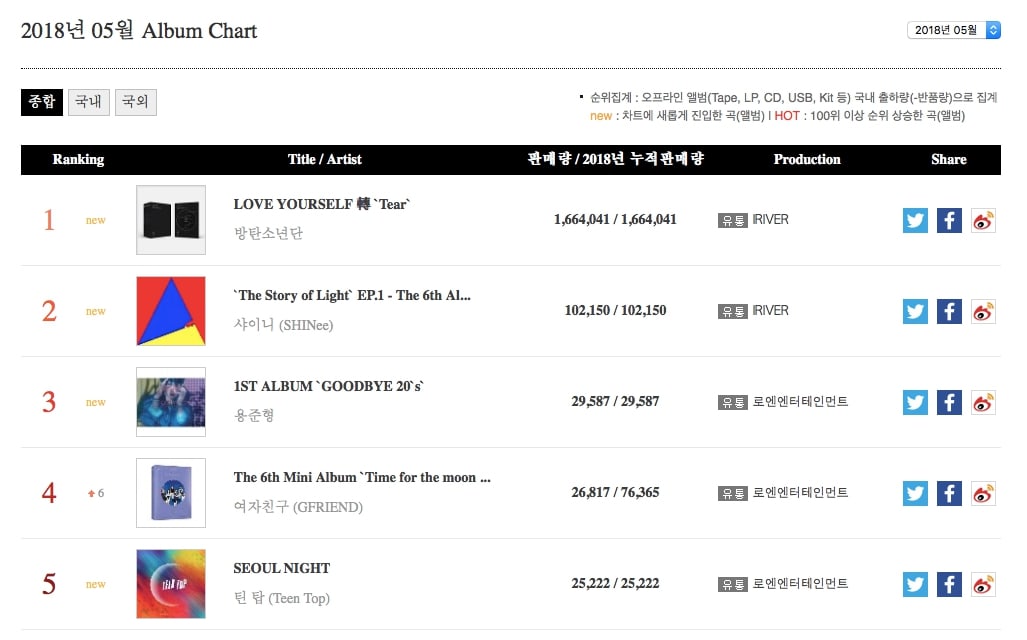 BTS’s “Fake Love” topped the download chart for May, followed by GFRIEND’s “Time for the Moon Night” at second place and Bolbbalgan4’s “Travel” at third. Loco and MAMAMOO’s Hwasa came in at fourth with their hit collaboration “Don’t,” while Crush’s “Bittersweet” took fifth place for the month. 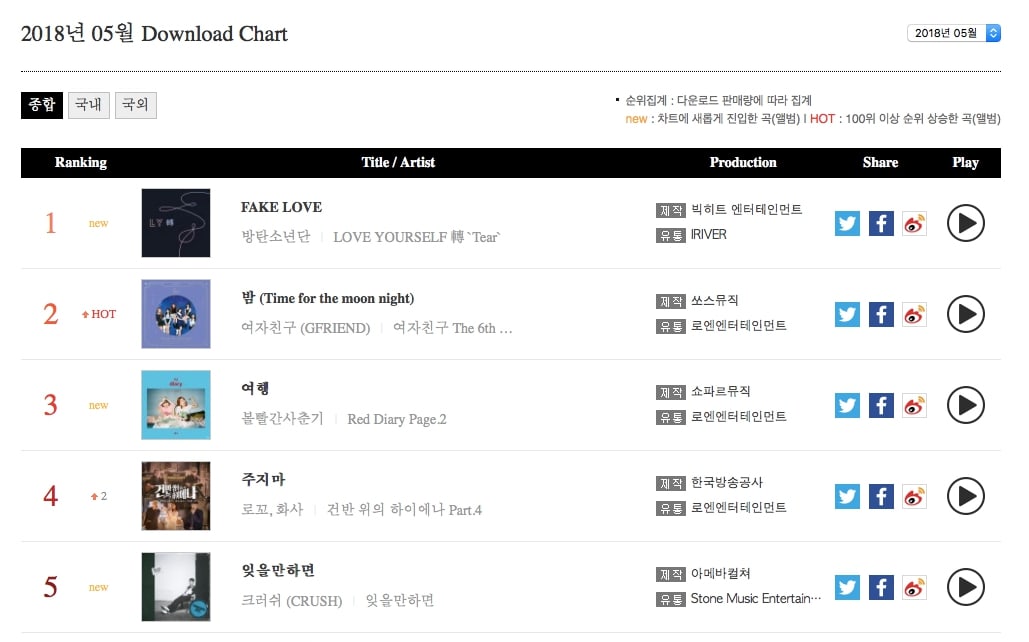 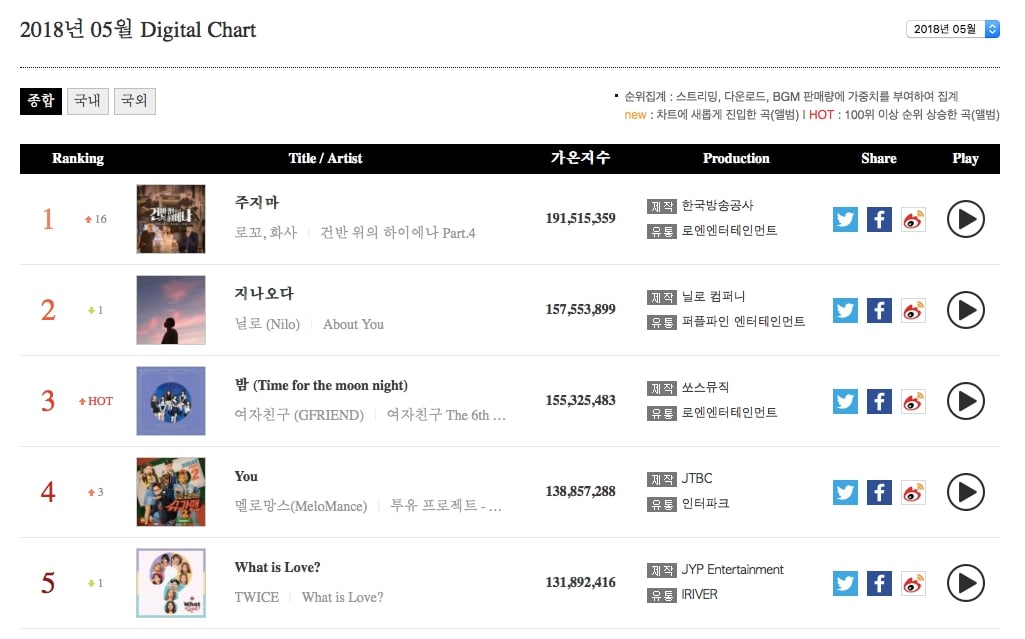 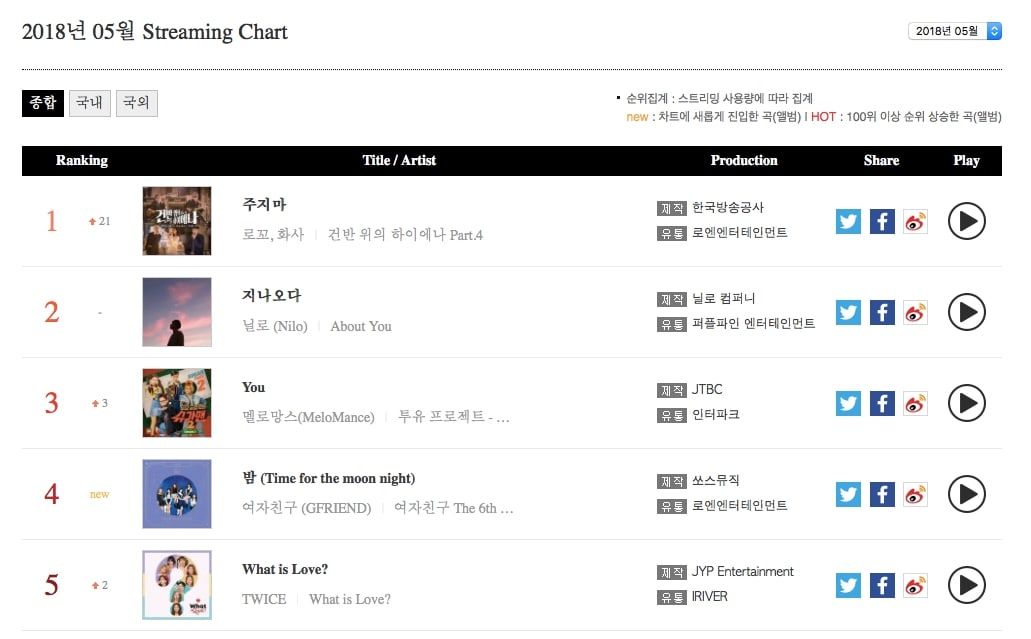 SHINee’s “The Story of Light EP. 1” topped the album chart for the week of May 27 to June 2. BTS’s “Love Yourself: Tear” fell one spot to claim second place, while three new girl group releases rounded out the top five: AOA’s “Bingle Bangle,” LOONA yyxy’s “beauty&thebeat,” and PRISTIN V’s “Like a V” came in at third, fourth, and fifth places respectively. 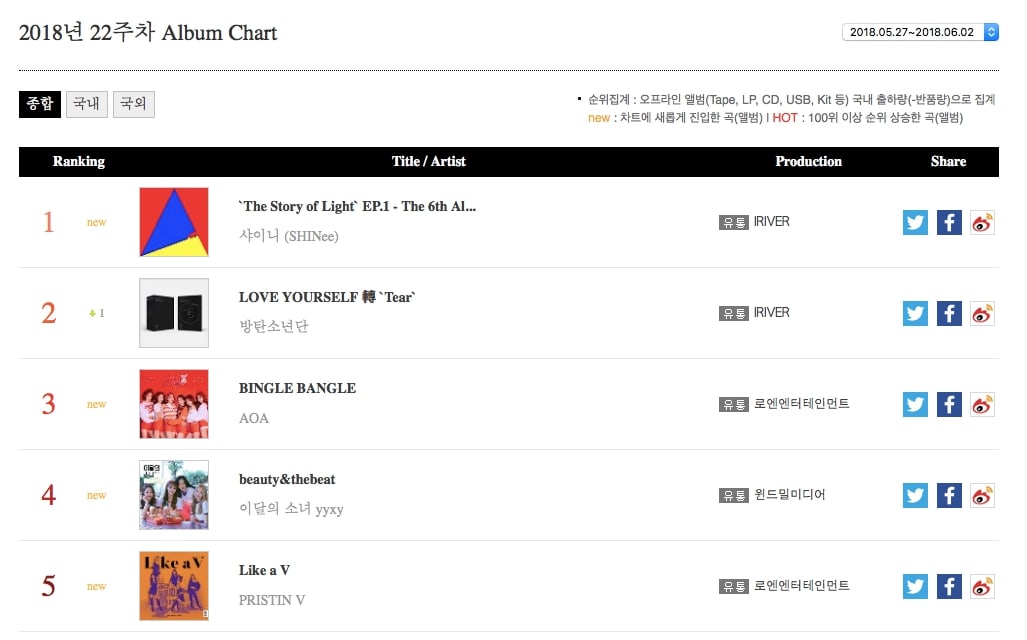 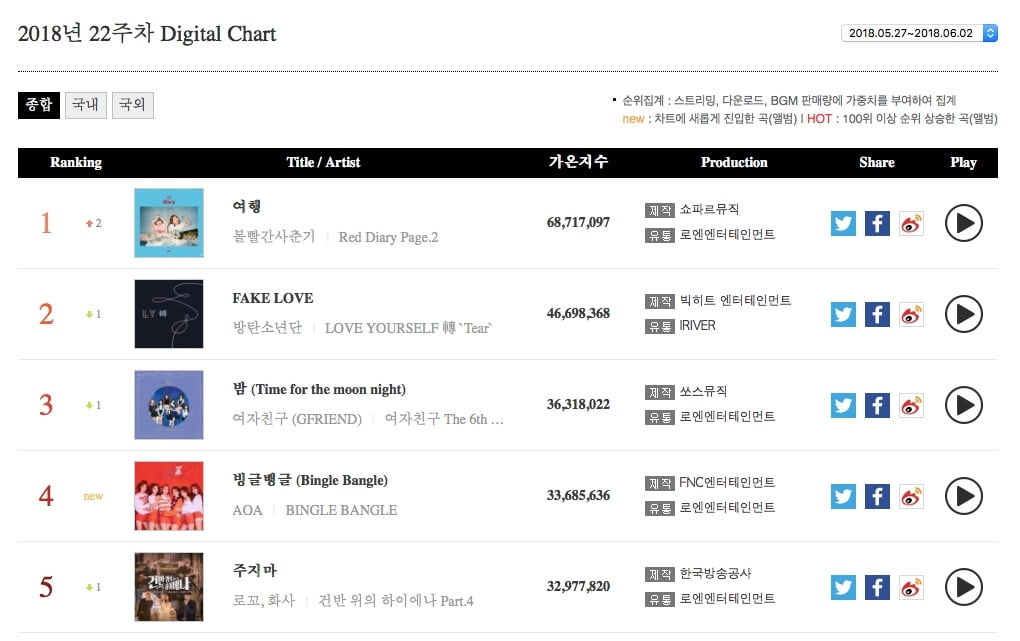 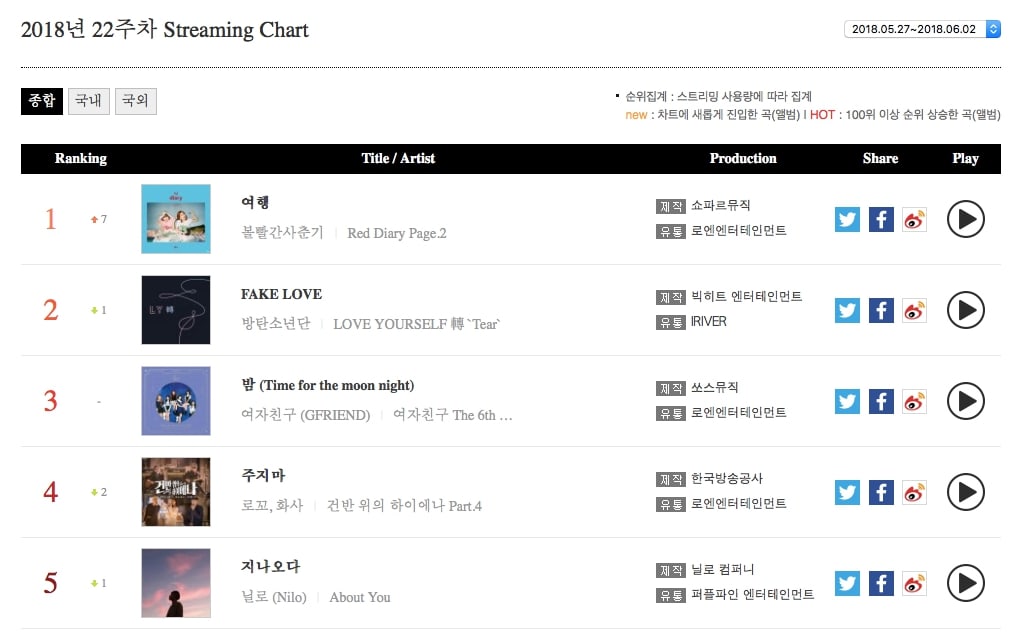 Second place on the weekly download chart went to AOA’s “Bingle Bangle,” with SHINee’s new title track “Good Evening” debuting on the chart at third. BTS’s “Fake Love” took No. 4 for the week, while GFRIEND’s “Time for the Moon Night” maintained its spot at No. 5. 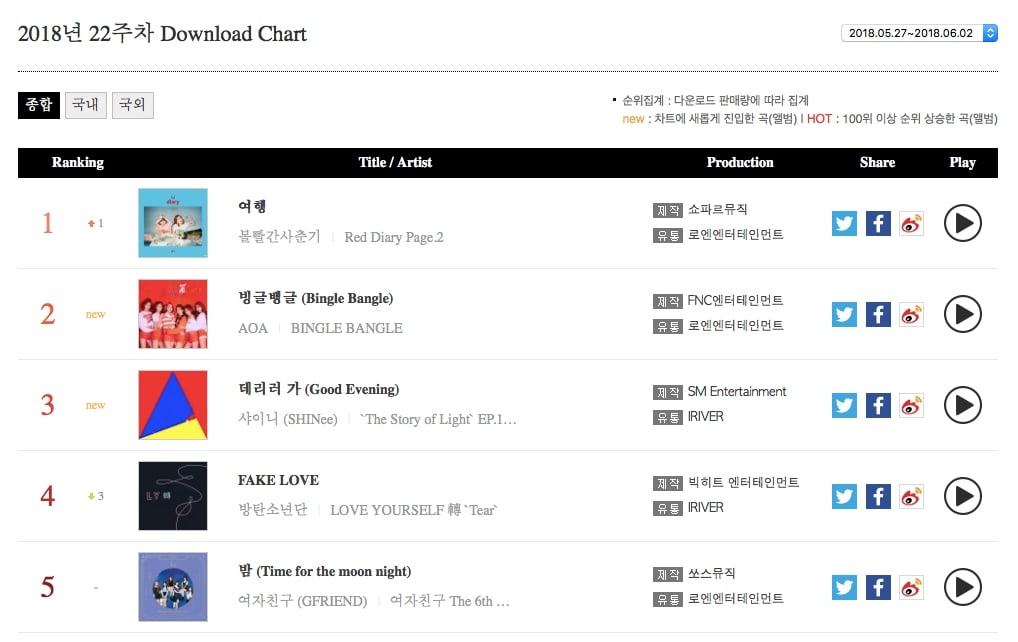 Finally, BTS’s “Fake Love” remained at first place on the social chart for the third straight week, while WOODZ (UNIQ’s Seungyoun)’s “Pool” and MOMOLAND’s “BBoom BBoom” also maintained their positions at No. 2 and No. 3 respectively. AOA’s “Bingle Bangle” claimed No. 4 on the chart, followed by TWICE’s “What is Love?” at No. 5. 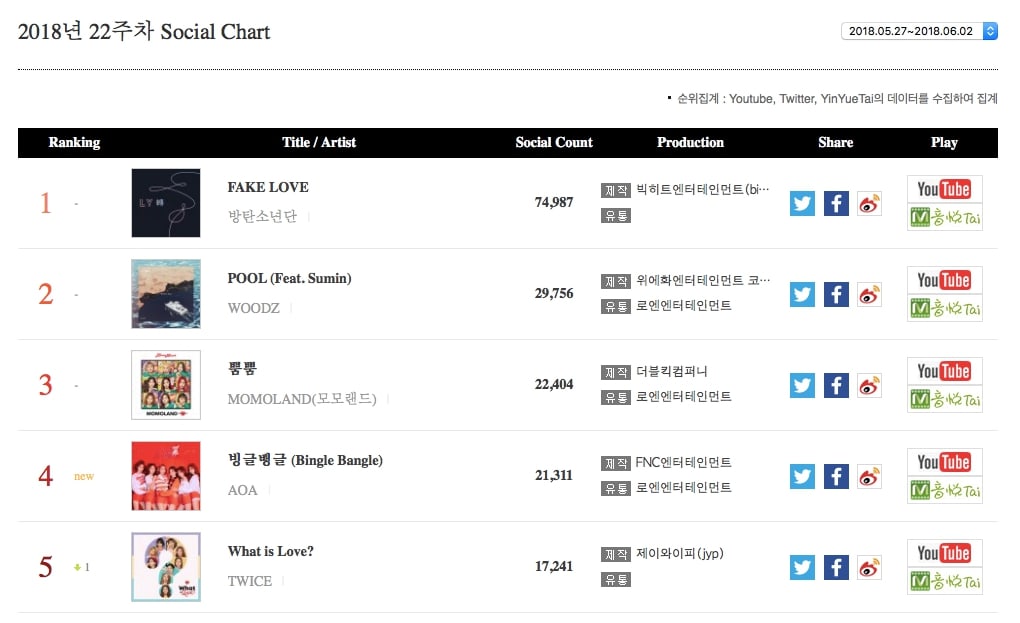