On September 12 at midnight KST, BTS’s official Twitter shared a poster for RM’s birthday with lots of fun photos. 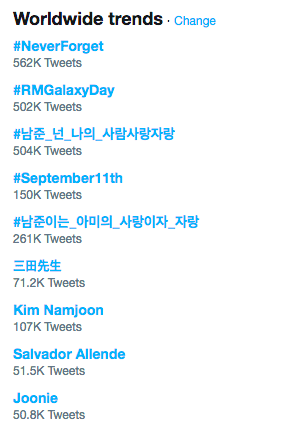 BTS is currently in the United States for their sold-out world tour, but RM’s fellow members have already begun wishing him a great birthday! Jimin posted on Twitter, “Since it’s past midnight in Korea, happy birthday Namjoons.”

He also shared some lovely shots of himself with RM.

Another photo was shared on BTS’s twitter of RM, Jimin, and Jungkook, with the caption including the first letters in each syllable of “Happy birthday, Namjoon hyung.”

Jimin added a quick clip he took of RM, with him zooming in close on the leader’s face. RM comments that Jimin’s planning to use this for his birthday, and Jimin laughs and replies, “How did you know?!”

BTS recently wrapped up their four nights of shows at the Staples Center in Los Angeles, and will be performing at the Oracle Arena in Oakland on September 12.

Have a wonderful birthday, RM!