BTS Reveals How They Feel About Being Compared To The Beatles

In the western world, BTS‘s incredible success and massive popularity are frequently compared to that of another famous group.

The Beatles, an English 1960s rock band, is considered one of the most influential music acts of all time. They produced dozens of addictive, countercultural songs and took over the world with “Beatlemania”, a craze born from the love of their intensely devoted fans.

Like The Beatles, BTS has legions of loyal fans (ARMY) and have earned their place in music’s illustrious hall of fame. That said, BTS and The Beatles are two very different groups, each with their own type of music, messages, and performance style.

In a new interview with TIME for “2020 Entertainer of the Year”, V said it was an honor to be compared to The Beatles, and it makes BTS happy, but he also pointed out a few key differences. 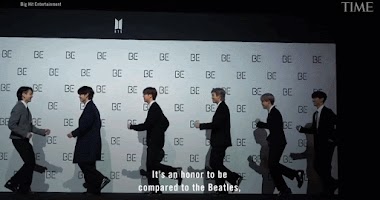 “What’s different is that we’re seven,” he said, taking the words right out of Jimin‘s mouth. “We also dance, sing, and appear on entertainment shows. We show our chemistry a lot, and we live life to the fullest in various ways. Life goes on.”

“I think that’s just kinda like a cliche of after The Beatles,” RM added. “and we’re just some boys from Korea who love music and performance. That’s it.”

BTS Chosen As TIME’s “2020 Entertainer Of The Year”