BTS makes history once again as they enter the Top 40 of the United Kingdom’s Official Singles Chart!

The group’s latest track “IDOL” has debuted on the August 31 Official Singles Chart at No. 21. Their previous highest ranking on the chart was No. 42 with “Fake Love” earlier this year.

“IDOL” achieved No. 21 with 4,000 digital downloads and 2.5 million streams, which include both the original song and the version featuring Nicki Minaj.

This is the first time that a Korean group has ever entered the Top 40 of the United Kingdom’s Official Singles Chart. Taking a spot in the “Top 40” of a music chart is regarded as an important event within the music industry, following the history of radio formats where the “Top 40” songs were played frequently as they were the most popular songs at the current time.

The only other Korean artists who have charted on the Official Singles Chart Top 100 are PSY (who took No. 1 with “Gangnam Style” in 2012) and BLACKPINK, who entered the chart for the first time at No. 78 with “DDU-DU DDU-DU.”

Meanwhile, “Love Yourself: Answer” enters the United Kingdom’s Official Albums Chart at No. 14. This is the third time that a BTS album has ranked in the Top 20 of the chart. It also comes in at No. 7 on the Official Independent Albums Chart. 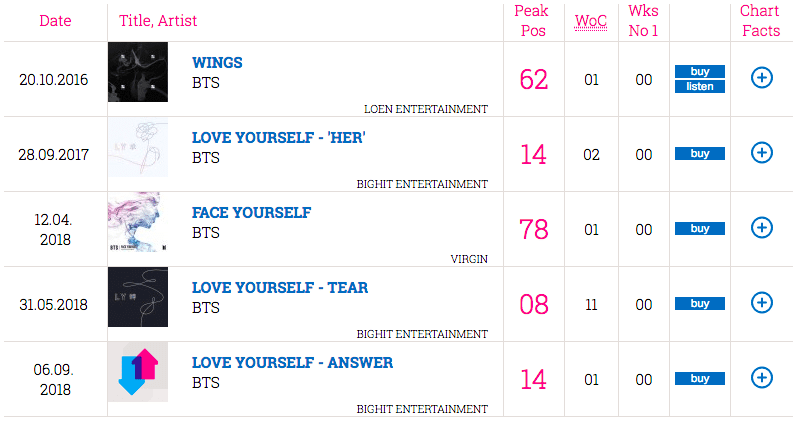