For three stressful days, BTS fans have been counting down to a surprise, and the surprise is this: there is no surprise.

On July 27, Columbia Records kicked off a countdown to BTS’s August 21 release, plus six other mysterious events.

Fans predicted that the first scheduled event (July 31, 12AM KST) would be a teaser for BTS’s comeback, but when the clock struck twelve, this popped up instead.

Have you joined the BTS Party yet? Be sure to connect with Spotify so you can get access to the new BTS song on August 21st!https://t.co/6t6KRIfp46 //  @bts_bighit // #BTS pic.twitter.com/qGcy9WJD67

Needless to say, fans were disappointed. For one thing, following BTS on music platforms, including Spotify, is already a given.

For another, WTF? The tweet’s comment section is being flooded by confused ARMYs, and they’re demanding to know the reason for this next-level clownery. 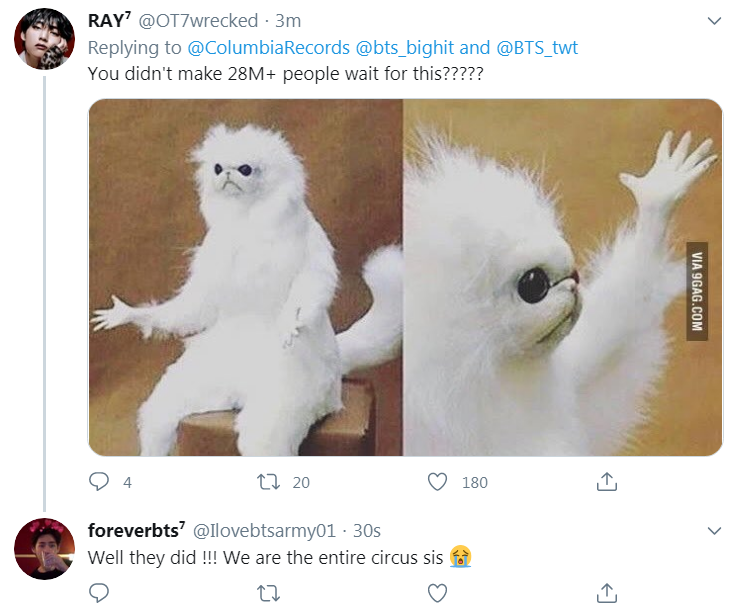 LIKE YOU ARE MAKING A COUTNDOWN WITH SO MUCH HYPE ONLY TO REMIND US TO CONNECT WITH BTS THROUGH SOCIAL MEDIA PLATFORMS THAT WE ALL ALREADY HAVE??? CMON GIVE US CONCEPT PICS, TEASERS AND THE FCKING N A M E OF THE SINGLE

Well, at least it isn’t another headache-inducing countdown like the one for Agust D‘s D-2…right?

In case you missed it, here are the rest of the countdown dates. Nobody knows what to expect from them now, but here’s hoping that the next surprise will be, well, a surprise.