BTS just accepted their Van Fleet Award and gave a speech that is sure to inspire many, but Chinese netizens think that BTS was being disrespectful to their own people.

RM‘s part of the speech referred to 2020 being the 70 year anniversary of the Korean War, and honored those who sacrificed their lives to help South Korea separate from North Korea. 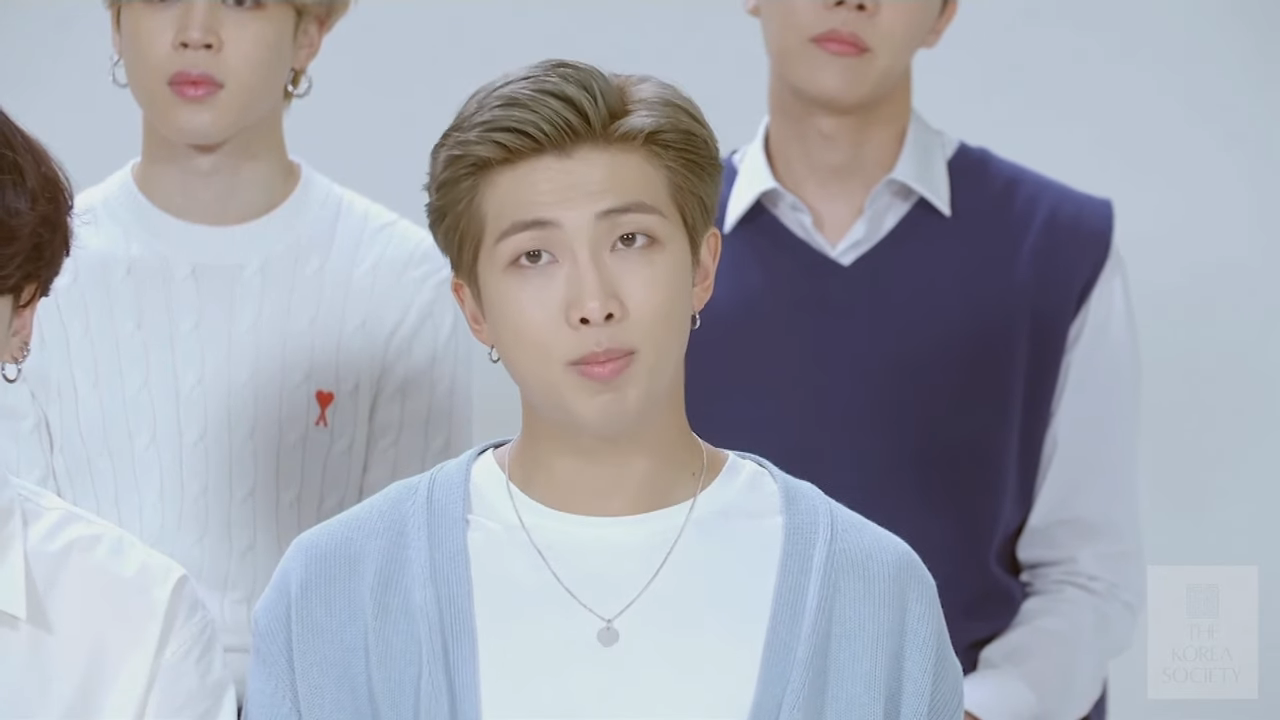 This year’s Korea Society 2020 Annual Gala is especially meaningful as this year marks the 70th Anniversary of the Korean War. We will always remember the history of pain that our two nations shared together, and the sacrifices of countless men and women. After seventy years, the world we are living in is much closer than before, and boundaries and many aspects are getting more blurry than before.

As members of the global community, we should build deeper understanding and solidarity to be happier together. In pursuit of this cause, BTS will always remind ourselves of the meaning of the Van Fleet Award and keep doing our best in all that we do. Thank you very much.

However, Chinese netizens have an issue with this statement, as the Chinese were on the side of communism backed North Korea, along with the Soviet Union. Hundreds of thousands of Chinese lives were also lost in the Korean War.

We CHINESE lost 200,000 of our compatriots in that war

When you were 28 years old, you were making Chinese money

When Chairman MAO's son was 28 years old, he stayed in that war forever
If you don’t know about the history, please SHUT UP @BTS_twt pic.twitter.com/4qgI9EMlOW

Chinese ARMY are now being targeted by Chinese netizens for RM’s portion of BTS’s speech, given how sensitive of a topic the Korean War is within China. While it is not censorship level, it is still strongly frowned upon as a discussion point.

Big hit, did you see it? C-ARMYs are now being scolded to death. Just because of your big hit, can the award speech prepared for artists go over your head? Whose heart do you think you are breaking?#MapOfTheSoulOne_D2

@bts_bighit Are you giving up the Chinese market? The Korean War is a very sensitive topic for us,Chinese army is having a hard time now.????????

Other Chinese ARMY are upset as RM’s portion of the speech is affecting the entire group, with other members being affected by the speech for which they didn’t have a say in the script.

#BTS #KIMTAEHYUNG #KimNamjoon As for RM being involved in political issues, I can't stand being a Chinese. Now many Chinese fans have taken BTS off the fan list.This involved Taehyung,who clearly said nothing and did nothing. I want your company to give an apology

Currently on Weibo, China’s largest social media platform, one of the popular realtime search terms is “BTS insults the Chinese”.

Netizens are expressing their displeasure towards BTS in the comments section of BTS posts as well, with many comments receiving tens of thousands of likes. 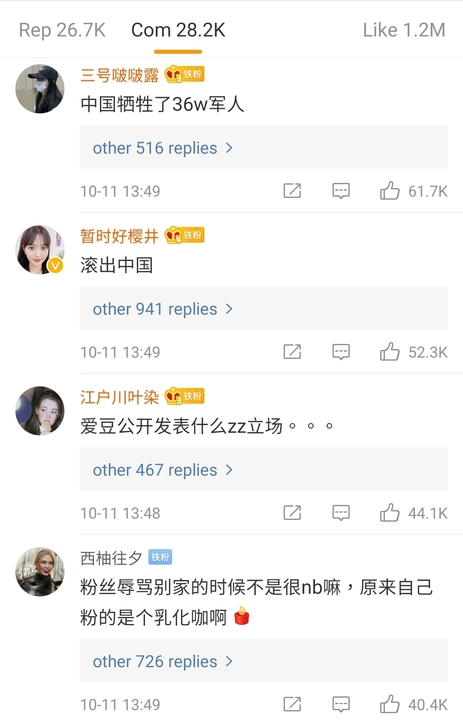 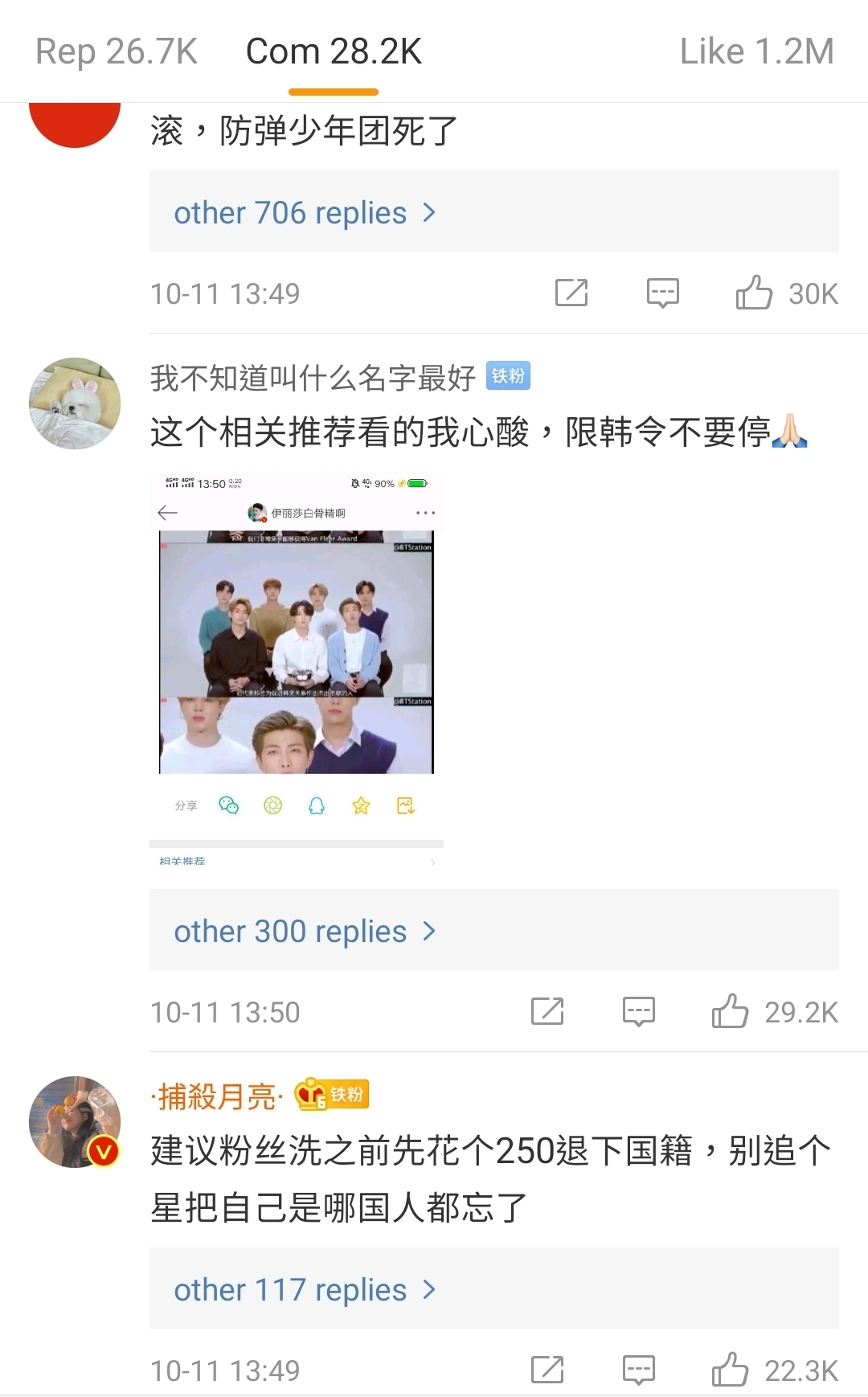 Big Hit Entertainment has yet to make an official statement on the matter.