Legends Supporting Legends: 10+ Times BTS And Epik High Cheered Each Other On

Some may not be aware that BTS and Epik High are one of the closest friends in the Korean music scene. They’re never shy when it comes to publicly supporting each other. As a pioneer of K-Hip Hop, Epik High was the role model that BTS looked up to since pre-debut, and they’ve interacted numerous times since then.

1. When they wrote together

Suga collaborated with Epik High for their EP Sleepless In__________, writing the song “Eternal Sunshine”.

Before it was released, the boys of Epik High teased the collaboration with a photo of Suga visiting their studio on October 30, 2018.

2. When Tablo only had good things to say about Suga

Tablo gushed about Suga’s songwriting skills and their own chemistry together on his own podcast.

It’s like working with any other artist that is very talented and passionate. And also, me and him, we vibe really well creative-wise and music-wise. It was a very simple process. We finished the song in a matter of days, but the actual creation part didn’t take a few hours even.

3. When RM shared how much he loves Epik High

RM was inspired by Epik High in his early school years, sharing, “I decided to rap my story when I was in my first year of middle school. I was impressed by ‘Fly’ of Epik High”. 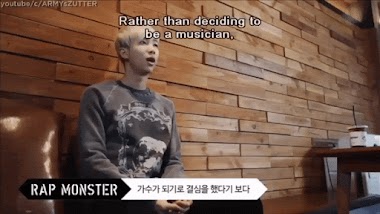 4. When BTS was super excited to see Epik High perform

After saying that “Korean Hip Hop is Epik High sunbaenims“, the boys rushed to watch their ongoing stage on MCountdown. 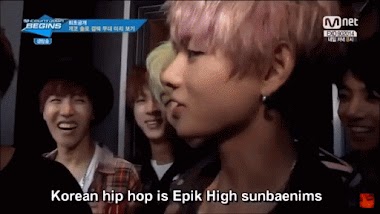 5. When they took a photo together

After one performance, the two artists got together backstage and took photos, showing how comfortable they are in each other’s presence.

Epik High performed their hit “Born Hater” in the 4th Gaon Chart K-Pop Awards last 2015. BTS was seen jamming away the entire time, even standing up to dance!

7. When Tablo gave RM a signed copy of his book

Tablo gave a signed copy of his book, “Blonote”, to RM in 2016. The BTS leader excitedly posted a photo of him hugging it on their Twitter page.

Next up, Tablo posted Suga’s message to him on Instagram that showed their friendship. The younger rapper shared a photo of his Billboard Music Awards badge, to which Tablo replied, “Proud of you ^^”.

Tablo’s definitely not stingy with his support! He often listens to their songs and posts them online such as with BTS’s 2017 hit “DNA”.

Out of all the songs available, RM chose to sing “Umbrella” from Epik High’s Pieces, Part 1 with a fan on Duet Song Festival.

11. When Epik High was listed as one of RM’s influences

He even included Epik High in his own song’s lyrics! In the track “Hip Hop Lover”, RM named the group as one of the artists that made him love the genre.

Why you love that HIPHOP s***?
Then I tell them, I don’t have a reason
It’s cause it’s hip hop
Nothing special, Epik High

And finally, the most recent interaction between the two artists was when RM posted a photo of him listening to “Leica”, a track from Epik High’s 2021 album Epik High Is Here 上.

Listen to it for yourself below!