Fans of BTS know that Jin, although the oldest member, is not the leader of the group. Host Shin Dong Yeop asked, “Since you’re the oldest, you could have held a grip on the members. How did you come to create the atmosphere now? 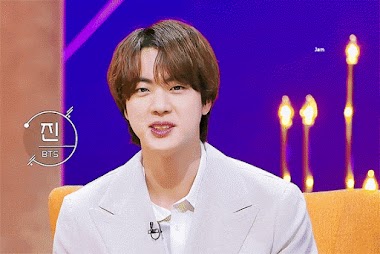 Jin revealed that he would have but couldn’t because the members were all so talented and good people.

The members are all talented and good people and I couldn’t find anything that I was better at than them. Honestly, I could have held a grip on them if they weren’t all that, but I couldn’t.

After hearing his answer, V couldn’t help but think that this was a compliment to the rest of the members.

This kind of sounds like a compliment meant for everyone?

The back story of why this question came about was from J-Hope’s comment about what kind of person Jin was.

We don’t need words to describe our Jin hyung. He is amazing just as he is. His handsome face, wide shoulders, beautiful voice….and his age. The last one was a joke but he is the oldest out of us all. Because he is the oldest, we thought that he would think the order of age was important, but he was actually the opposite of that. He is the one that creates the atmosphere for our group. If you think about it, there was a role he had as the oldest, and he was able to play that role of being a pillar while creating a soft atmosphere.