BTS‘s Jungkook is known for breaking records and is often called the “SNS King” by fans for his skill in destroying the internet. Despite the year only just beginning, he has already broken 21 records! Let’s take a look at all of his achievements so far! Who knows what record he will break next later on…

1. Most Real-time Viewers in VLIVE History

Jungkook’s recent live broadcast with his blue hair reached over 13.5 Million real-time viewers! The most in the platform’s history!

2. Most Real-time Comments in VLIVE History

The blue hair broadcast also achieved the most real-time comments in the platform’s history! The number was about 10.2 million comments!

His infamous blue hair broadcast also reached 10 million views in 32 minutes! This is the fastest time to achieve this number in VLIVE history.

4. Only Individual Hashtag On TikTok to Have Over 36 Billion Views

Jungkook continues to hold this record; however, BTS’s Jimin is coming close with his record-breaking 30 Billion views!

5. Only Person With 5 Tweets With Over 1 Million Retweets

Jungkook is the king of Twitter, but his blue hair reveal absolutely destroyed most of Twitter’s records. This tweet made his previous record of 4 bump up one when it hit 1 million retweets!

6. Only Person Besides Former President Barack Obama and Current President Joe Biden to Have More Than One Tweet With Over 3 Million Likes

Jeon Jungkook joins former and current president of the United States Barack Obama and Joe Biden as the only people in the world to have more than one tweet with over 3.000.000 likes. pic.twitter.com/65QYMbPQIs

U.S. Presidents often easily get likes on Twitter due to their influence. However, Jungkook has now joined them in having multiple tweets with over 3 million likes!

Jungkook is the only individual to have two of his personal Tweets surpass 700K comments on Twitter (no voting related Tweets).@BTS_twt #JUNGKOOK #정국 #JK pic.twitter.com/Q6QmuHNT46

His blue hair launched him into being the first person on Twitter with over 700,000 comments on two personal tweets!

Jungkook is the first individual to have 3 of his personal Tweets surpass 500K replies on Twitter.@BTS_twt #JUNGKOOK #정국 #JK pic.twitter.com/gE3JswR2KV

Jungkook breaks his own record and has surpassed 1 million of retweets in just 12 hours, his previous record was with his blonde hair selca in 16 hours. pic.twitter.com/uzRAoPWrn2

Who didn’t love his blue hair?! The tweet made him break his own record of reaching 1 million retweets in the fastest time (previously 16 hours). He broke this new record in 12 hours!

11. Fastest Tweet By An Artist To Reach 2 Million Likes

[Info] #Jungkook's selca breaks Twitter's record of being the fastest tweet to reach 600K comments in just 9 Hours and 46 Minutes. ????

[Info] #Jungkook's selca breaks the record of being the fastest tweet to reach 200K, 300K, 400K comments in Twitter. (He held the old records)

Since his blonde tweet reached 600,000 comments in record time, this also made him break the record for every step in between!

14. First and Only Korean Idol To Have 2 Solos Chart For 50 Weeks on Billboard World Digital Song Sales

My Time by Jungkook spends its 50th week charting on Billboard World Digital Song Sales, making Jungkook the first and only Korean Idol to have 2 solos with 50 weeks on the chart. (My Time and Euphoria).@BTS_twt #JUNGKOOK #정국 #JK pic.twitter.com/blaGJkq2mT

Jungkook’s “My Time” broke several records, including being his second solo song to chart for 50 weeks on Billboard! “Euphoria” was the first. This made him the first and only Korean soloist to do so.

15. First K-Pop Idol To Have A Solo Chart for a Full Year on Billboard World Digital Song Sales

Jungkook is now the first K-Pop Idol to have one of his solos spend a full year charting on Billboard World Digital Song Sales with Euphoria at 52 weeks.
@BTS_twt #Jungkook #방탄소년단정국 pic.twitter.com/6tBg3SiF4h

“Euphoria” continued its hold on the chart for another few weeks, making it the first solo song to chart for an entire year.

“Euphoria,” although being a solo by Jungkook, was a B-Side Track on BTS’s Love Yourself: Answer album. This allowed it to become the first Korean B-side to be streamed 200 million times on Spotify. 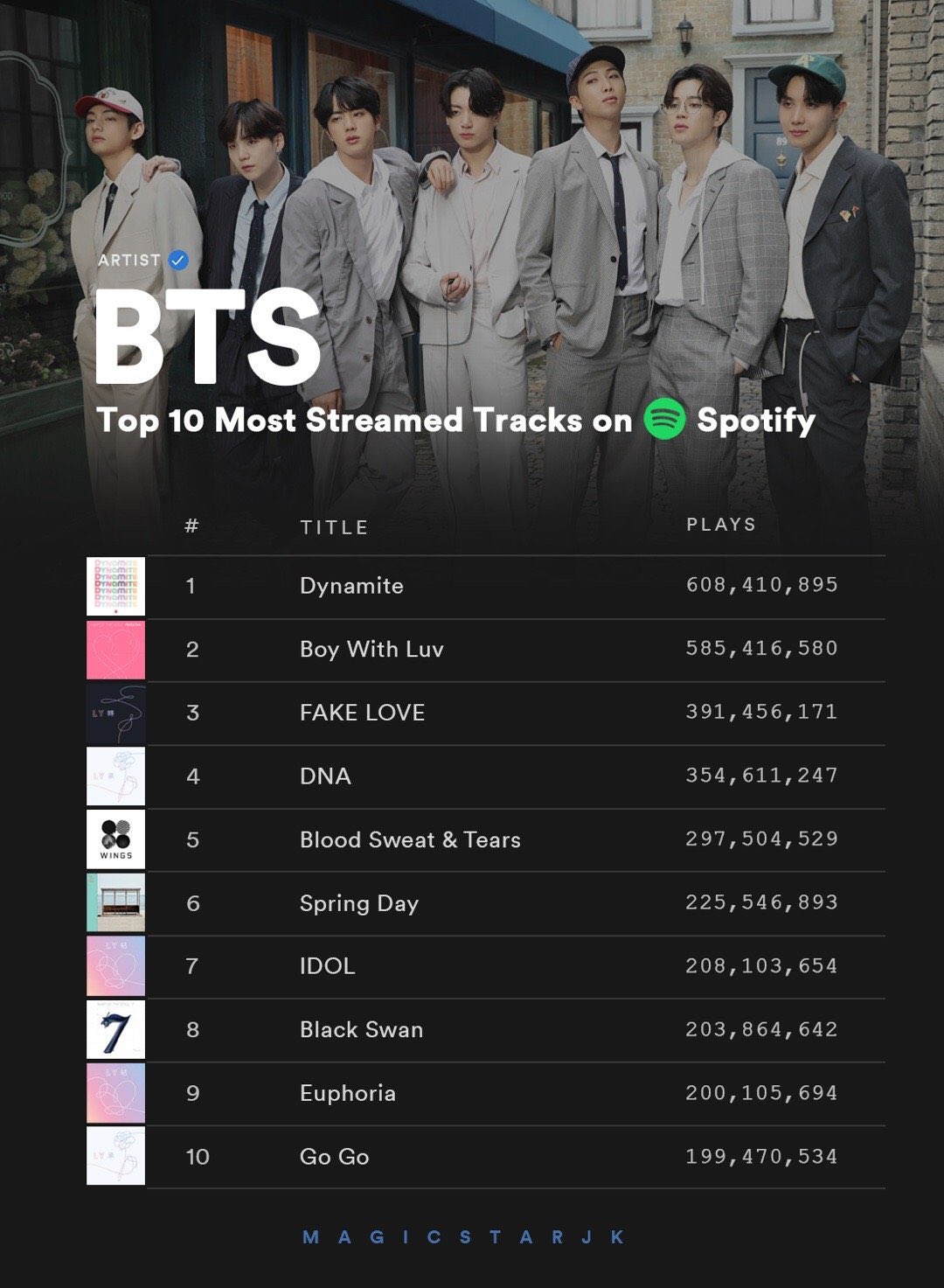 BTS has made several solo tracks over the years, but “Euphoria” was the first to earn a spot on BTS’s 10 Most Streamed Songs.

[Info] 'Stay' composed by #Jungkook has reached #1 on this week's Billboard World Digital Song Sales Chart, the First B-side Song from 'BE' to reach #1.

Together with 'My Time' and “Your Eyes Tell', Jungkook now owns 3 #1 Songs in the chart, the first member to reach this record pic.twitter.com/1BPm5doQ3T

Jungkook was the first member to earn 3 #1 spots on Billboard’s Digital Song Sales. The songs were “Stay,” “My Time,” and “Your Eyes Tell.”

Along with charting on Billboard, “Stay” also went on to top the charts of Amazon’s best-selling songs!

Euphoria by Jungkook is now the first solo song by a Korean male Idol and the first Korean b-side track to reach 200 Million streams on Spotify!

“Euphoria” was also able to become the first Korean Solo song to be streamed 200 million times on Spotify.

Each member has a solo track; however, Jungkook’s “Euphoria” was the first to be streamed 200 million times on Spotify.