Fans are calling for Jo Se Ho to apologize to Jungkook following news that BTS will be making an appearance on Yoo Quiz On The Block.

BTS will appear as guests in the variety show’s 99th episode with hosts Yoo Jae Suk and Jo Se Ho.

We will be working with BTS for the 99th episode of the show. You will be able to see the great chemistry between Yoo Jae Suk and Jo Seho on top of the fun and genuine plans for this BTS special.

It has been years since BTS appeared on any Korean variety show except their own, Run BTS!, and ARMYs are excited to see what Yoo Quiz On The Block has planned. For some, however, the announcement has also brought back unpleasant memories.

In 2016, Jungkook appeared on the variety show Flower Crew with Jo Se Ho. When he personally brought burgers for the cast to enjoy, Jo Se Ho refused to eat them, and his castmates followed suit. 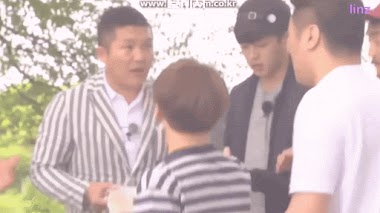 At the time, fans claimed the cast treated Jungkook poorly because of his popularity. During viewer voting, which determined who would be receiving benefits, ARMYs flooded the programs’ polls to vote for Jungkook. He allegedly felt pressured to ask ARMY to stop voting for him because of how negatively his fellow cast members reacted.

Five years later, fans have not forgotten what happened on Flower Crew. On February 23, “jo seho” became a trending topic on Twitter, as fans tweeted about the burger incident and called for an apology.

JO SEHO BETTER APOLOGIZE OR ELSE

Jungkook bought you burgers and sprite and you said it looks like left overs and you were forced to take it. I want an apology letter with tears. BTS forgives but I don’t. Jo Seho, apologize properly or buy a whole mf burger factory pic.twitter.com/PAsQGvcjXd

Jungkook is the kindest and humble person in the world and of course he won't say anything against and will act normal in that variety show but putting him in that uncomfortable place and situation is unforgivable, wtf Bighit thinking, Jungkook deserves better, away from Jo Seho. pic.twitter.com/xrSPmI9oXF