K-Pop fandoms are all about the memes, but have you seen the Korean side of things? Here are 10 hilarious memes from K-Fans that you’ve might not seen before.

1.  Something doesn’t match up…

With the size and image of SHINee‘s Taemin and MONSTA X‘s Shownu, this meme was inevitable with the caption, “Who’s the person that bullied him when he has such as huge build? Mr Taemin, I’m fwine…”

He looked too cute with that bag of snacks to not do this one with “Okay, Renjun can live at the mart. Mom will go home! Noo, I’m ready too, let’s go home now.”

3. Bulletproof they are not

This hilarious fan-taken shot of BTS‘s Jin and Jimin stole the limelight with the caption, “Jimin dodged the bullet but Jin got hit.”

SEVENTEEN‘s Boo Seungkwan somehow looks exactly like this shoe when he makes that expression! 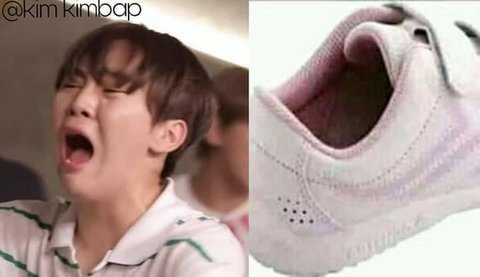 A hilarious caption, “it seems like the hoola hoop is spinning Dokyum“.

6. Jeno’s the only one that can control Chenle (NCT)

Chenle is known to be very strong-willed! It seems like Jeno is the only one that can “make him silent“!

Would you accept this humble drink of water if, “that gentleman over there sent this over“?

8. Just another day with EXO

When Chanyeol asks Kai “do you see that? From here to there…the land is all yours…” and Kai is touched by the gesture, the “real estate agent Mr Byun” can only go “they’re acting up…”

Literally! Although Jimin is the one singing, can you spot the little mood light RM at the corner?

This caption does it for us when they say NCT‘s Taeil looks like your crush’s friend that found out you like his friend!

Aren’t K-Fans’ humor one of a kind?