BTS Reveals Nicki Minaj Will Feature On Track In “Love Yourself: Answer”

Nicki Minaj has confirmed through a comment on her Instagram that on top of the digital track that has now been released, she will be featuring in a new version of BTS’s “IDOL” music video that is due out in a couple days!

She shared the news in a reply to a fan on her post about her new collaboration with BTS. 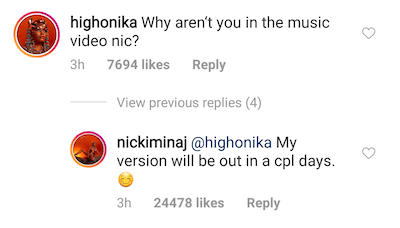 BTS has prepared an amazing collaboration with rapper Nicki Minaj!

On August 24, BigHit Entertainment announced, “Nicki Minaj will be featuring on ‘IDOL (feat. Nicki Minaj),’ the last track of BTS’s upcoming repackage album ‘Love Yourself: Answer,’ which will be released today at 6 p.m. KST.” The song is not included in the physical copy of the album as it will be a special digital track. Nicki Minaj’s signature rapping style is set to reimagine BTS’s new title track “IDOL” in an interesting way.

The agency explained that after finishing their work on the new album, BTS sent Nicki Minaj a request to feature on the album as they felt that her rapping would fit the song well, and the rapper happily took up the offer. Anticipation was already soaring for the conclusion to BTS’s “Love Yourself” series, and the news that Nicki Minaj will be joining the album is only raising people’s excitement for the release.

BTS’s “Love Yourself: Answer” is set to be released at 6 p.m. KST on August 24. The group will also be holding their solo concerts on August 25 and 26 in Seoul, where they will perform their new title track for the first time for fans.

Are you excited for the collaboration between BTS and Nicki Minaj?