Why does Agust D have a scar? ARMY asked and BTS‘s Suga answered!

Ever since the music video for “Daechwita” dropped, fans have been brainstorming theories about Agust D’s scar. Some believe that it’s the Joseon equivalent to shooting society the middle finger.

Yoongi’s a descendent of a royal clan so he is technically a “descendant to the throne” but you weren’t allowed to be King or Queen if you had a scar, so Yoongi’s showing that he beat the system and became a King despite all the odds against him pic.twitter.com/vCA9tjY16k

Others saw it as a hint that the blonde Agust D is a false king.

K ARMY said, the real king was the black haired Yoongi, since his scar was completely healed. while the blonde yoongi is just pretending to be him. (seems he got the scar recently) reason why the guy (who almost beheaded him), gave the gun to kill the fake king. pic.twitter.com/xzelEDjC3a

On May 22, Suga answered a question about his scar and more in a new interview on BTS’s YouTube channel, BangtanTV.

Which the theories about Suga’s scar are true? Apparently, none of them. It turns out that the scar was simply an aesthetic choice to add an element of shock to the video! 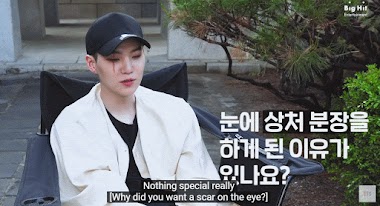