ARMY are headed on a worldwide scavenger hunt!

On February 21, fans discovered a new website called ARMYPEDIA that is described as “the digital archive of all things BTS, made by ARMY!”

The website states, “From their debut on June 13, 2013 to today, BTS has been together with ARMY for almost 2,100 days. ARMYPEDIA is a special chronicle of the memories of ARMY’s journey together with BTS over each and every one of those unforgettable days.” 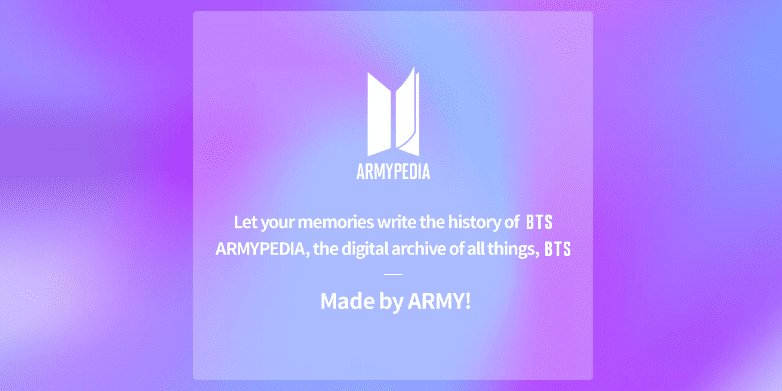 ARMYPEDIA tells fans that 2,080 puzzle pieces have been hidden in cities around the world and throughout the internet. Each puzzle piece corresponds to a date in BTS and ARMY’s shared history, with a QR code for each piece. Once fans scan the QR code and successfully answer a quiz question about BTS, that date will be unlocked. Any ARMY can then upload something about BTS on the date card that’s related to that day in history.

ARMY will be able to read other fans’ postings and give them a “purple heart” if they like them, with the entry with the most purple hearts named the “Top Memory” for that day. Once ARMY has unlocked all 2,080 dates, ARMYPEDIA will be completed and special rewards will be given to fans depending on their level of participation.

The campaign will officially launch on February 25, and runs until March 24.

Big Hit Entertainment has not announced a connection to this website, however the company has reportedly applied for a copyright for the ARMYPEDIA logo.

Whoever is in charge, they know ARMY well.

Alright so they KNEW we would find out about this TODAY… that’s not freaky at all BH… O____O #ARMYPEDIA pic.twitter.com/s9ans7XCQi

Naturally, #ARMYPEDIA is trending worldwide as fans react to this discovery and get ready to start the adventure.

A QR code has already been found in Korea.

The barcode was on the Korea's Yogurt lady cart that sells BTS cold brew coffee hhhh. So most clues probably in Korea, Japan, US? #ARMYPEDIA #barcode #hunt #bts #army pic.twitter.com/vbHUQWUSXL

Suddenly it feels like summer 2016, when Pokémon Go was launched.

This is going to take some strategy and teamwork.

And of course, the idea of having to go out and look for clues is getting some mixed reactions.

We're about to get all this sunshine and fresh air. #ARMYPEDIA pic.twitter.com/hpIhUmyYeo

Oh my god,, Bighit actually want me to go outside into the real world to look for clues and shit?! Bruh,,im a hermit, i never go outside..??‍♀️ #ARMYPEDIA

#ARMYPEDIA
me being outside after months just to collect these puzzle pieces
pic.twitter.com/bC5ozl3h2i

But ARMY wouldn’t back down from a challenge.

BH: all your training has lead to this… you’re ready…
#ARMYPEDIA pic.twitter.com/4wNBBlMk0s

Fans are ready to leave no stone unturned.

once #ARMYPEDIA is available you best believe imma be scanning any code i see. “oh, look. this shampoo bottle has a code. this might be it.”

Are you planning to take part in ARMYPEDIA?