Melon Magazine has now removed the categorization of “grand prize” from all of the first four awards listed in its article, making it unclear which awards the 2017 Melon Music Awards considers to be grand prizes. 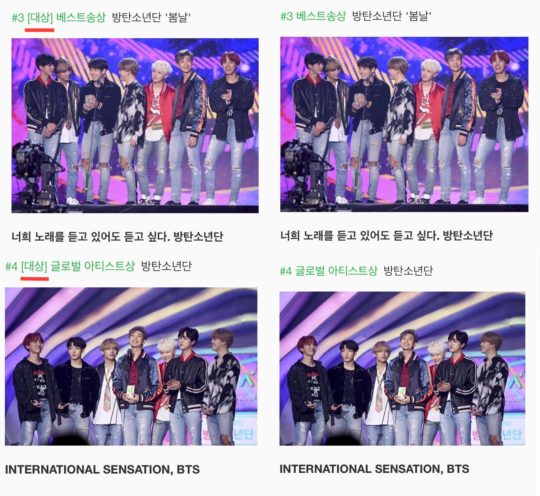 It has been belatedly revealed that BTS won an additional grand prize (daesang) at the 2017 Melon Music Awards, as the Global Artist Award they received at the ceremony is also categorized as a grand prize.

BTS took home the Best Song of the Year award for “Spring Day” at the December 2 ceremony, with IU’s “Palette” named as Best Album of the Year and EXO winning Best Artist of the Year. These were assumed by many to be the three awards categorized as the “grand prizes” of the year’s ceremony.

However, Melon Magazine posted an article on December 14 that looks back on the awards of the night and includes BTS’s Global Artist Award as a fourth grand prize.

The article mentions that the award had not been given out since PSY won in 2013. It describes BTS as an “International Sensation” and lists BTS’s achievements this year including having two songs chart on the Billboard Hot 100, their mini album’s rise to No. 7 on the Billboard 200 chart, and their performance at the American Music Awards.

Including their two grand prizes, BTS won four awards in total that night as a group, including a Top 10 Artist award and the Best Music Video Award for “DNA.” BTS’ Suga was also awarded the Hot Trend Award along with singer Suran for her song he produced entitled “Wine.”