On November 9, BTS posted an episode of Bangtan Bomb on their YouTube channel and revealed a scene of V playing the piano with his feet.

This scene is part of a clip of the group visiting the BTS pop-up store that has a large piano installed on the floor that seemed to also be seen in their “Boy with Luv” music video as well. 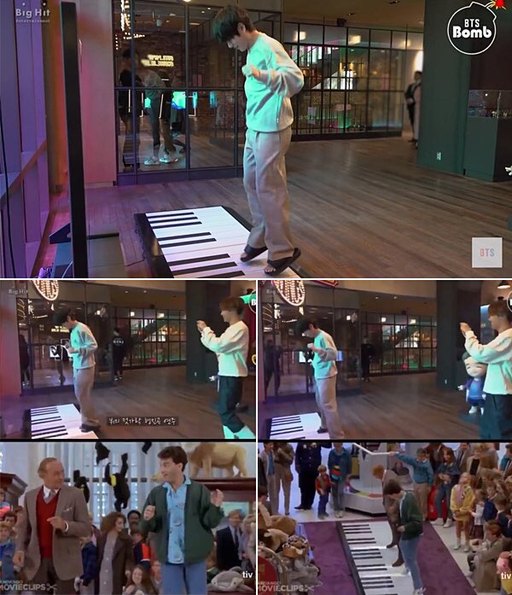 Fans even posted a side by side video to show how talented he was at playing the song.

i’m putting it side by side so you’ll be aware how talented taehyung is, he perfectly played it with his FEET pic.twitter.com/9caNjAHIFr

V is seen wearing a comfy sweatshirt and slippers while playing this classical number with his feet by jumping around with his fists together. This short 1 minute scene had fans swooning over his piano performance.

V seemed to really enjoy this piano piece in particular and could be seen playing it on several occasions.

they weren't kidding when they said that taehyung was good at celebrated chop waltz. during this fansign he already played a bit of it and he really masterized it. pic.twitter.com/dqe6TLjI0f

This piano clip also seemed to be a movie reference to the 1988 movie “BIG” featuring Tom Hanks.

taehyung and his movie reference ???? pic.twitter.com/JHWKeVBKj4

Although V did not officially learn piano, he spent his younger days learning the saxophone.

His dream in middle school was to become a saxophonist and won an award at competitions. He is known to be an artist that enjoys all ranges of music from classical to hip-hop.

Take a look at the full video below!