BTS’s V has hinted at dropping a mix tape and fans are totally losing it! The hash tag #KTH1ISCOMING began trending worldwide with over 156K Tweets after he revealed that he has been working on several songs in the chat of a game room.

The message V left in the chat reads:

Taehyung just left a message in the game room that he wrote several songs and will produce his mixtape and ask us to look forward to it shshshshs we ain't ready!!!! #KTH1ISCOMING @BTS_twt
Credit: apple1230g (instiz) pic.twitter.com/Ww0vmgjEf7

Fans were ecstatic to hear that V would be releasing new music soon.

locals getting blown away by Taehyung's voice and visual, Kim Taehyung worldwide IT boy, the ultimate Stan attractor face of kpop. No one is doing it like kim Taehyung#KTH1ISCOMING pic.twitter.com/7clgyMTtoB

still couldnt process how he said “of course there’s gonna be a mixtape” ???? #KTH1ISCOMING pic.twitter.com/LHK1JTK1A1

taehyung has been telling us about how he’s been writing songs until late at night, he’s shown us snippet of the songs, he told us to wait because /of course/ he’s gonna release his own mixtape. he is so hardworking and i love him so much ????#KTH1ISCOMING pic.twitter.com/vuJyZBJwDG

over the years tae faced prejudice as a singer yet he strived & acquired his own sound, he redefined himself as an artist thats globally hailed for his exceptional music & the pride we're feelin at the knowledge of his mixtape is testament to his growth as an artist #KTH1iscoming

This isn’t the first time V has hinted at new music as he’s continued to give previews and hints through live streams and social media. In his last live stream session he even gave fans a brief preview of a song he had been working on.

no but speaking on the music…. if this is what kth1 is gonna sound like i’m about to fucking ascend pic.twitter.com/6S2DwOi8E2

Fans speculated new music from V starting way back in March as it seemed like the members were all working on something. 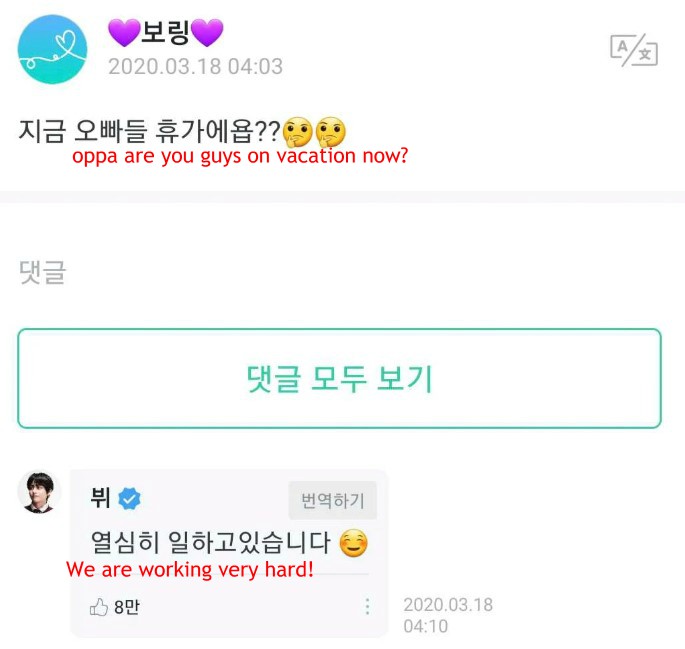 He then surprised fans with his track “Sweet Night” that was a part of the soundtrack for the drama Itaewon Class, which featured V’s best friend Park Seo Jun.

Are you ready for KTH1!