The CEO of Burning Sun, the club that has been swept up in various controversies in recent days, has issued his own official statement and apologized to BIGBANG’s Seungri for getting him involved.

CEO Lee Moon Ho took to his Instagram account to release his statement, and it reads as follows:

Hello. This is Burning Sun CEO Lee Moon Ho. Though I am late, I am releasing this statement as the CEO to respond to the doubts and disappointment that many people have.

I sincerely apologize for posting this statement so late as I was consistently checking the facts to be as accurate and detailed as possible, given how serious the issue is.

The reason I had privated my personal Instagram account is because I wanted to focus all of my attention on resolving the situation and finding a solution, rather than on social media. I had no plans to avoid or hide behind anyone regarding this situation.

Regardless of the reason, our former employee Director Jang’s actions of physically assaulting a customer was undeniably his fault, and it is a crime that must be met with a deserving punishment. After becoming aware of the severity of the situation, I immediately called for the firing of Director Jang, and he will have to deeply repent and receive the necessary punishment. I also believe I am responsible as I was the one who hired him.

I am deeply repenting that my inability to oversee my employees has caused so many to feel angered about Burning Sun. We will do our best to make sure this does not happen again, and we are fully complying with all relevant investigations. And I wish to speak on my relationship with Seungri, who has received the most damages from this situation.

Seungri and I have been long-time friends, and I asked if he’d be willing to be a consultant when I was preparing the club. I was the first to approach him about the idea as he was a veteran with 10 years of experience as a member of BIGBANG under his belt, and I believed that asking him to consult for the club would bring an additional advertising effect. Unlike the many other businesses that Seungri manages and runs himself, Seungri only helped as a consultant and assisted us in contacting foreign DJs for Burning Sun, he did not intervene in the actual management of the club.

He stepped down from his position as an executive director from the club because he felt it was right for him to sort out all of his connections to Burning Sun before enlisting, especially as he was not in charge of management for the club like he is for his other businesses and because there was an issue regarding stock transfers. My heart is heavy and pained that Seungri is receiving so much criticism and rebuke for something I suggested. I am very sorry.

This issue, which began with Director Jang’s physical assault, is currently being spread across various different topics including deals with the police, sexual assault, and drugs. Burning Sun has currently delivered all CCTV footage and documents related to the club to the investigative team, and we are actively complying with them.

Aside from the assault case, everything else is unconfirmed. Most of it is unsubstantiated rumors that have been spread.

Because of this unfortunate case, Seungri and the 400 Burning Sun employees, including myself, have received much criticism. In order to stop such events from happening again, I will actively aid in the investigation as the CEO of Burning Sun and if there are any faults that are uncovered after the truth has been revealed, I will make sure appropriately severe punishments are carried out.

I will comply with the investigative team to quickly uncover the truth behind situations that I was not aware of, and we are doing our best to ensure this does not happen again.

Once again, I sincerely apologize for causing concern with this case. Under no circumstances can physical assault be justified, and I will take responsibility till the very end to ensure the truth is revealed.

I bow my head and apologize to all customers of Burning Sun and to those who are disappointed in Burning Sun due to this incident.

There was another official statement released by Burning Sun that laid out what they would be doing moving forward. First, it established that Director Jang had been removed from his position following the assault incident. It also denied all allegations that the club turned a blind eye to the sale and use of drugs, as well as to any acts of sexual assault. They stated, “After the investigation, if the police find that the allegations are true, we will shut down Burning Sun.” They also included that they have already pursued legal action against those who spread false information about the club, and will continue to do so.

Finally, Burning Sun stated that they will be getting rid of the VIP rooms that are currently being questioned, as well as increasing the number of CCTVs to tackle blind spots. They stated they will also fire all employees who have a criminal record or other concerning factors, and create a KakaoTalk chat for female customers to submit complaints that can be dealt with immediately. 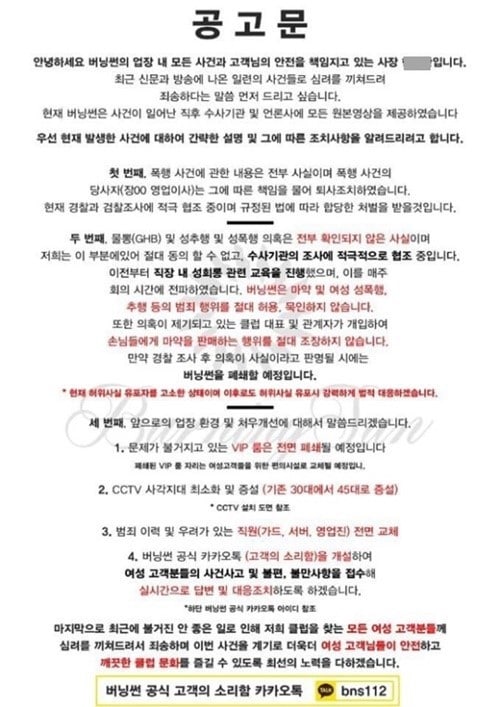 On January 28, MBC’s “News Desk” aired a report about an assault at Burning Sun. Since then, the police has responded with a press release with details of the incident and the investigation.Burning Sun Entertainment released a statement signed by CEOs Lee Sung Hyun and Lee Moon Ho regarding the various issues, including CCTV footage. Both Yang Hyun Suk and Seungri have also released statements explaining the situation since then.