Cha Tae Hyun must definitely be great to be around, as proven by those around him!

The actor appeared in an interview with SBS’s “Night of Real Entertainment” on April 25 and was asked whether it was true that Park Bo Gum and Song Joong Ki come to him with scripts in their hands to discuss their potential future projects. All three actors are currently signed under the same management label, Blossom Entertainment.

To this question, Cha Tae Hyun gave the humble reply of, “Anyone can see that they are at a higher status than me as actors, so I wonder whether I can be of any help to them. I think that about myself a lot. Even when I’m giving them advice.” 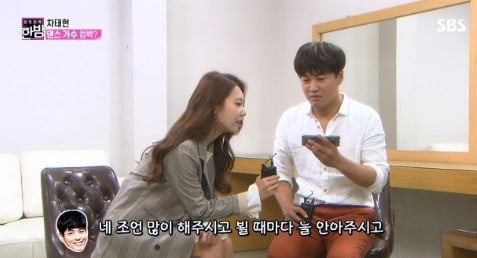 Cha Tae Hyun even called Park Bo Gum on the spot. The young actor was more than happy to vouch for his fellow actor as he affectionately revealed, “He gives me a lot of advice, and he always gives me a hug when he sees me.”

When asked if Cha Tae Hyun also buys him lots of delicious things to eat, Park Bo Gum had everyone laughing when he jokingly replied, “I think he will from now on.”