While the drama has been criticized for excessive use of product placement (PPL), it seems the appearance of Orion’s national snack Choco Pie in episode 14 may not be one of them.

Choco Pie, a round, marshmallow-filled bread covered in chocolate, is one of the oldest snacks in Korea and is traditionally famous for being one of the best things you can eat in the military.

After the episode aired, viewers were quick to point out the Choco Pie was a blatant product placement, along with the coffee, automatic driving features, and some red ginseng extract in episodes 13 and 14, as well.

However, Orion posted a video of Song Joong Ki with Ji Seung Hyun on their official Facebook page with hashtags, “ChocoPieIsLove. #WeDidn’tProposeProductPlacement #Unexpected_ChocoPieLove.” 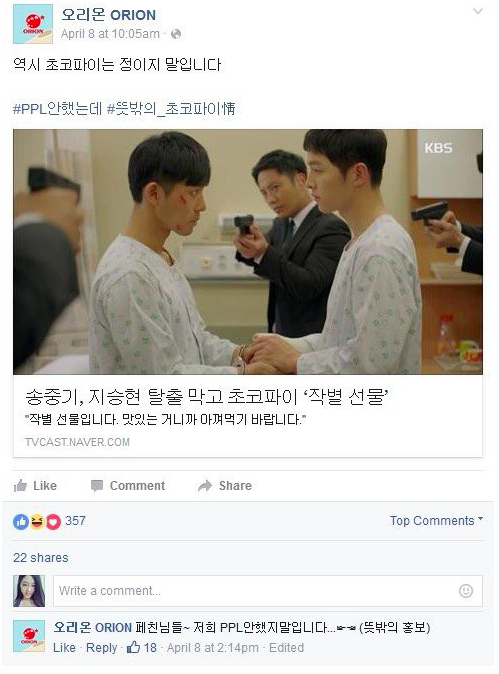 In the comments Orion also wrote, “Dear Facebook friends~ We didn’t request for product placement…. (An unexpected advertisement)” as well as “It wasn’t a PPL. They just needed the item for the scene it seems.”

Meanwhile, there are only two episodes left until the end of “Descendants of the Sun.”

Watch “Descendants of the Sun,” starting from episode one!

*A previous version of the article incorrectly named the North Korean soldier and has been edited for accuracy.