Chungha Talks About How I.O.I Members Keep In Touch

Chungha spoke about the ongoing friendship of the I.O.I members on MBN’s “Realistic Men and Women 2.”

On the August 31 episode of the reality show, the cast members showed various ways of relieving stress in their daily lives. Chungha met up with comedian Yoon Jung Soo to eat spicy food at a restaurant as one way to relieve stress.

The two stars greeted each other warmly, and Yoon Jung Soo remarked, “I’ve seen the I.O.I members since your debut, so I feel particularly sentimental [seeing you again] today.”

During their car ride, Yoon Jung Soo asked, “Are the I.O.I members doing well?” Chungha replied, “The I.O.I members all recently got their own cell phones. After three years, we finally created a group chat with all of the members.”

While watching the scene from the studio, Super Junior’s Leeteuk commented, “I want to join that chat room too.”

Yoon Jung Soo then surprised the other cast members by adding, “There was a time when I couldn’t get a cell phone because my credit wasn’t good.” 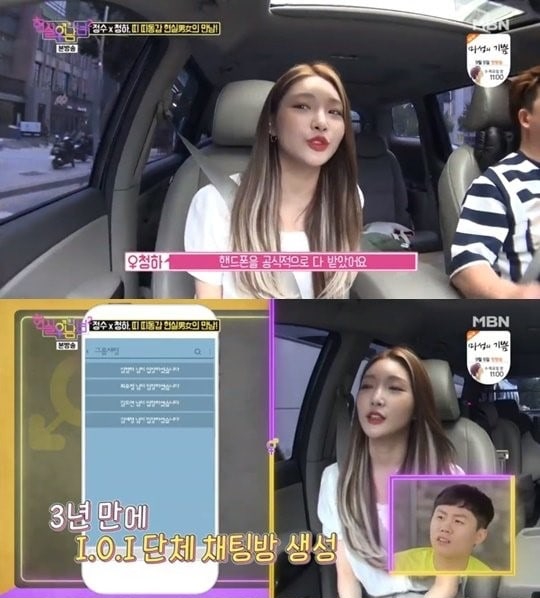 Chungha appeared on Mnet’s “Produce 101” in 2016 and debuted as a member of the project group I.O.I. After a year of group promotions, Chungha debuted as a solo artist and has since released a series of hit tracks such as “Roller Coaster” and “Love U.”