MBC’s “It’s Dangerous Beyond the Blankets” has made a solid debut in Content Power Index (CPI) rankings!

The Content Power Index ranks TV shows based on their overall popularity and influence on consumer behavior. Factors such as number of searches, news subscriptions, and social media buzz are analyzed to determine the rankings.

According to CPI rankings released by CJ E&M and Nielsen Korea for the week of April 2 to 8, KBS2’s “The Miracle We Met” topped the list with an overall score of 274.7 points. tvN’s Little House in the Forest” debuted at No. 2 with 256 points, and “It’s Dangerous Beyond the Blankets” entered the ranking at No. 3.

The top 10 shows on CPI rankings are as follows: 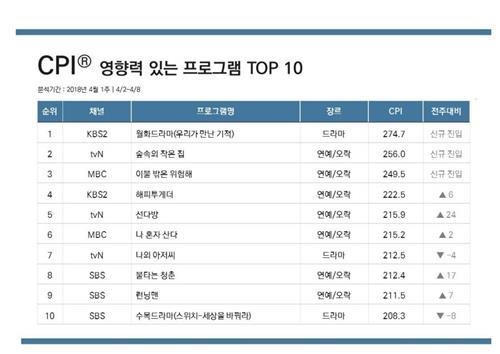 If you haven’t already, watch the latest episode of “It’s Dangerous Beyond the Blankets” below!