On December 19, the Broadcast Monitor Committee of the Democratic Press Citizens’ Alliance announced the results of their report titled, “How Dramas Depicted the World in 2017” regarding jobs portrayed by characters in dramas in 2017.

The Democratic Press Citizens’ Alliance looked at 197 characters that appeared on 49 dramas on KBS1, KB2, MBC, SBS, JTBC, and tvN after July. They put a limit of four characters including leads and supporting roles per drama and two to six characters if it was difficult to decide on four characters.

An analysis of the characters’ occupation and economic background revealed that one out of every four characters was a chaebol or a businessman.

According to their data, most of the dramas’ stories were centered around chaebols and appeared the most in all of the broadcasting stations’ dramas. Among the 197 characters, 46 of them or 23 percent were chaebols or businessmen. 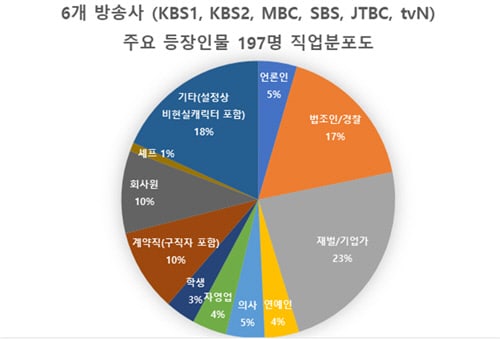 They were especially dominant in KBS or MBC dramas compared to other jobs. In SBS or tvN dramas, more legal professionals (judges, lawyers, prosecutors, etc) appeared more often than chaebols. They concluded that KBS and MBC were not able to veer away from telling chaebol-centered dramas, while SBS and tvN were leaders in new trends.

Also, journalism and legal dramas shined this year according to the report’s findings. Out of the 49 dramas aired on six broadcasting companies, 19 dramas featured a lead in the legal sector which is close to 40 percent.

In the case of journalists, there were only nine characters out of 197 which is about 4 percent. However, this is about the same amount as doctors and celebrities who frequently appeared in dramas. Reporters, who were not previously shown in dramas as leads, emerged as new characters in 2017.

The Democratic Press Citizens’ Alliance did not include dramas that aired after November 20 and excluded those that only featured teenagers, centered around school, or sageuk (Korean historical dramas). This meant KBS1’s “Andante,” KBS2’s “Queen for Seven Days,” “School 2017,” “Girls’ Generation 1979,” and SBS’s “Saimdang, Light’s Diary” were excluded from the results.