On April 5, DIA’s Yebin announced the news on the group’s official fan cafe through a handwritten letter. 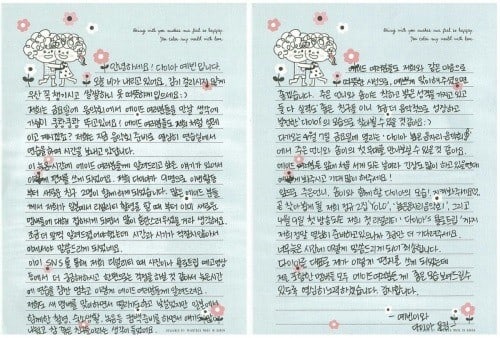 She updated fans that DIA would be returning with two new members named Jooeun and Somi. Yebin expressed her love for these new members, praising them for their talents and personalities.

She wrote, “Not only are Jooeun and Somi cheerful and good-natured, but they also have skills that will help us grow musically. I think we’ll be able to come back with many improvements. Jooeun and Somi will be performing for their first time at our concert this week on April 7. They are very nervous right now, so please give them a warm welcome.”

It was further revealed that Jooeun and Somi were added to DIA in order to enhance their vocal line following the departure of their former lead vocal Seunghee.

DIA will be pre-releasing their track “Flower, Moon, Alcohol” on April 6 before dropping their second full-length album “YOLO” on April 7.